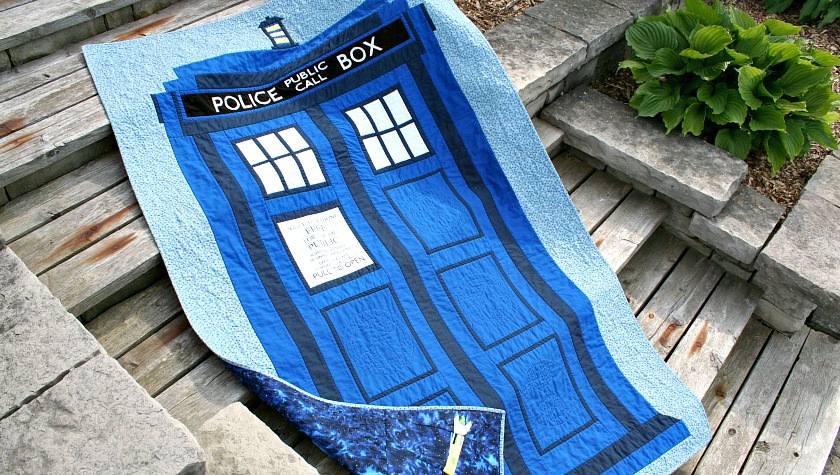 Are you or someone you know a Doctor Who fan? If so, you’re going to love this TARDIS quilt that I made for our son.

Our son doesn’t have room in his small apartment for Dave to custom build him a TARDIS bookshelf, but a quilt on the other hand was definitely something I could make and give to him for Christmas. At least that was the plan!

After searching Pinterest, I decided on the TARDIS quilt pattern by Sam Hunter of Hunter Design Studio. Once I’d downloaded and printed out the pattern, the search was on for fabric.

Now you would think that with a quilt made from such basic colors, the fabric would be easy to gather, but you would be wrong. 🙂

The Kona Navy (dark blue), Kona Ocean (medium blue) and Kona White by Robert Kaufmann Fabrics were bought at Jo-ann Fabrics in Port Huron, MI. The Kona Cotton Citrus came from Kaleidoscope of Quilts... the only quilt shop for miles around with that particular shade of yellow.

The border fabric was purchased at Len’s Mill in London, ON. And after looking at dozens of fabrics, I finally found the right silver/grey for the window panes at Sew Many Things Sewing Center.

Once I had all the fabrics and they’d been pre-washed, it was time to cut and sew. At that time, I was still sure I could finish the quilt in time for Christmas. However, that was not to be and our son received his quilt as a quilt sandwich wrapped in pretty paper.

Nevertheless, I couldn’t have been happier or more gratified with his reaction. I had folded it with the backing facing outward (which you’ll see in a minute is the perfect fabric for a TARDIS quilt.) When he unfolded it so that he could see the front, he jumped up and ran to get his phone to take a picture to send to a friend. By coincidence they had each gotten the other Doctor Who themed gifts for Christmas!

It has taken until the weekend before last to finish the quilt.

If you’re a subscriber, you’ll have seen glimpses of the quilt in my post where I show you how I free motion quilted the stars and swirls in the border surrounding the TARDIS

After I gave it to him that Sunday, we drove to the local train station for a photo shoot.

So without further ado… here is the finished quilt! 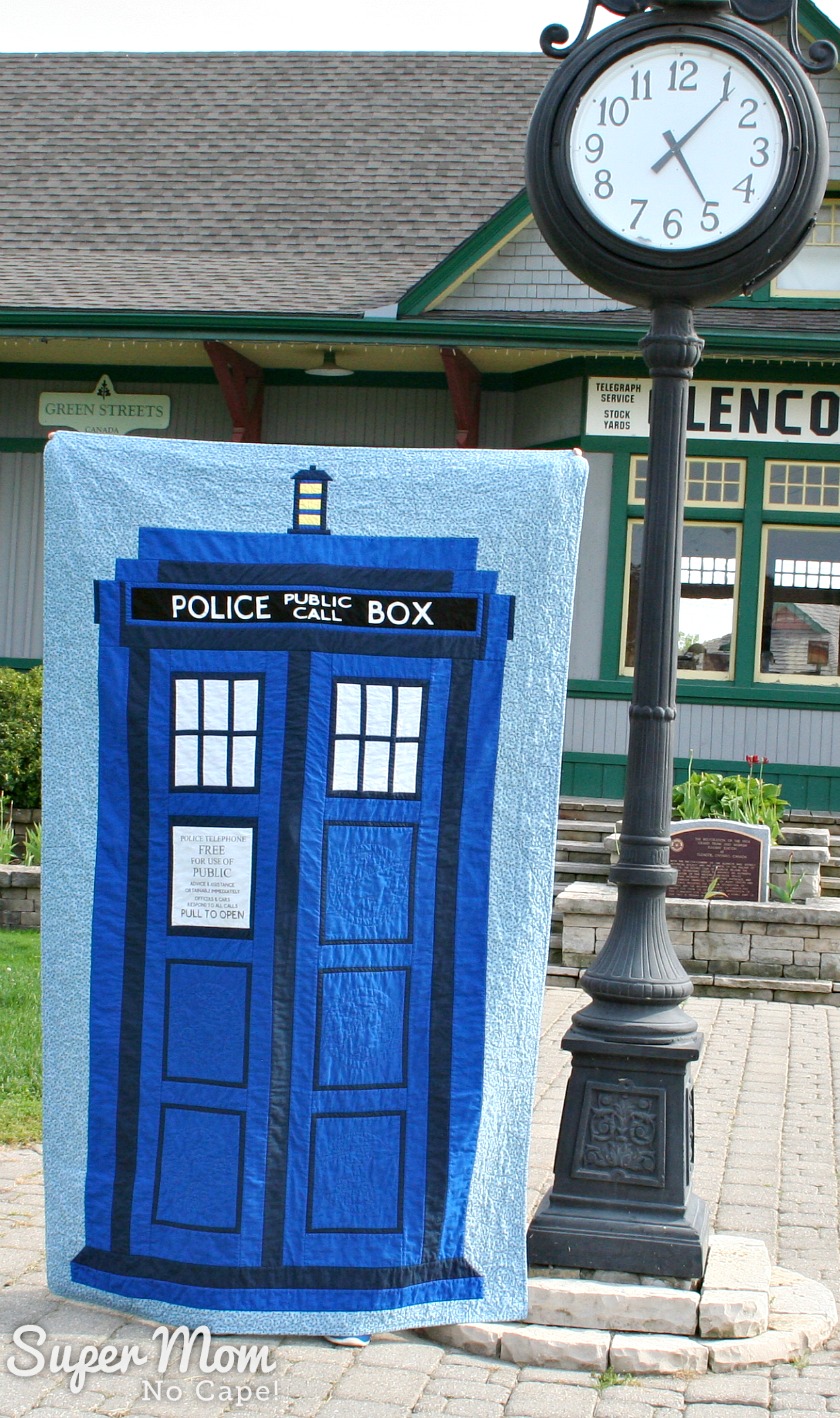 Laying on the wooden steps leading up to the train station: 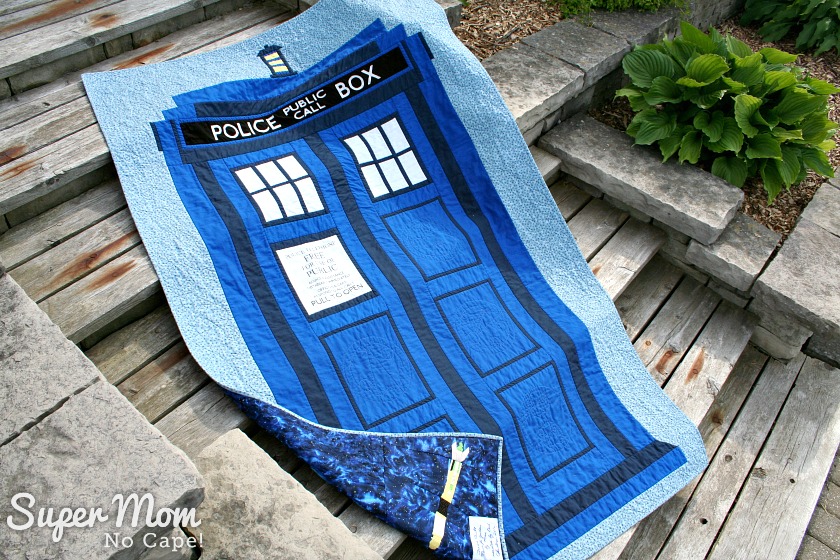 Below is a close up photo of the lantern and Police Public Call Box. The letters were fused to the black background and then I blanket stitched around them by hand. 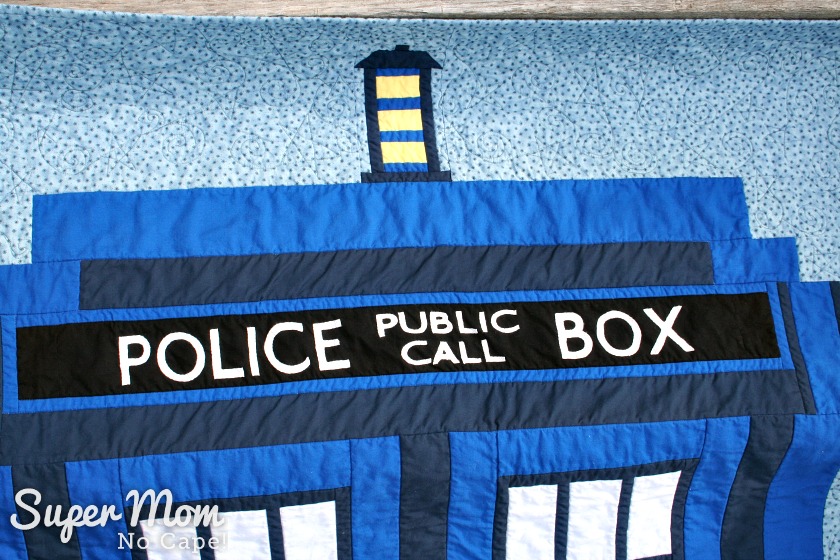 The “Police Telephone – Free for Use of Public” window sign was provided in the pattern. I printed it on to fabric with my ink jet printer.

Before making it into the block, I washed the printed panel in a solution of Retayne

(<<<affilitate link) and water. After it was rinsed and dried, I heat set it to make sure that the print wouldn’t bleed or wash out. 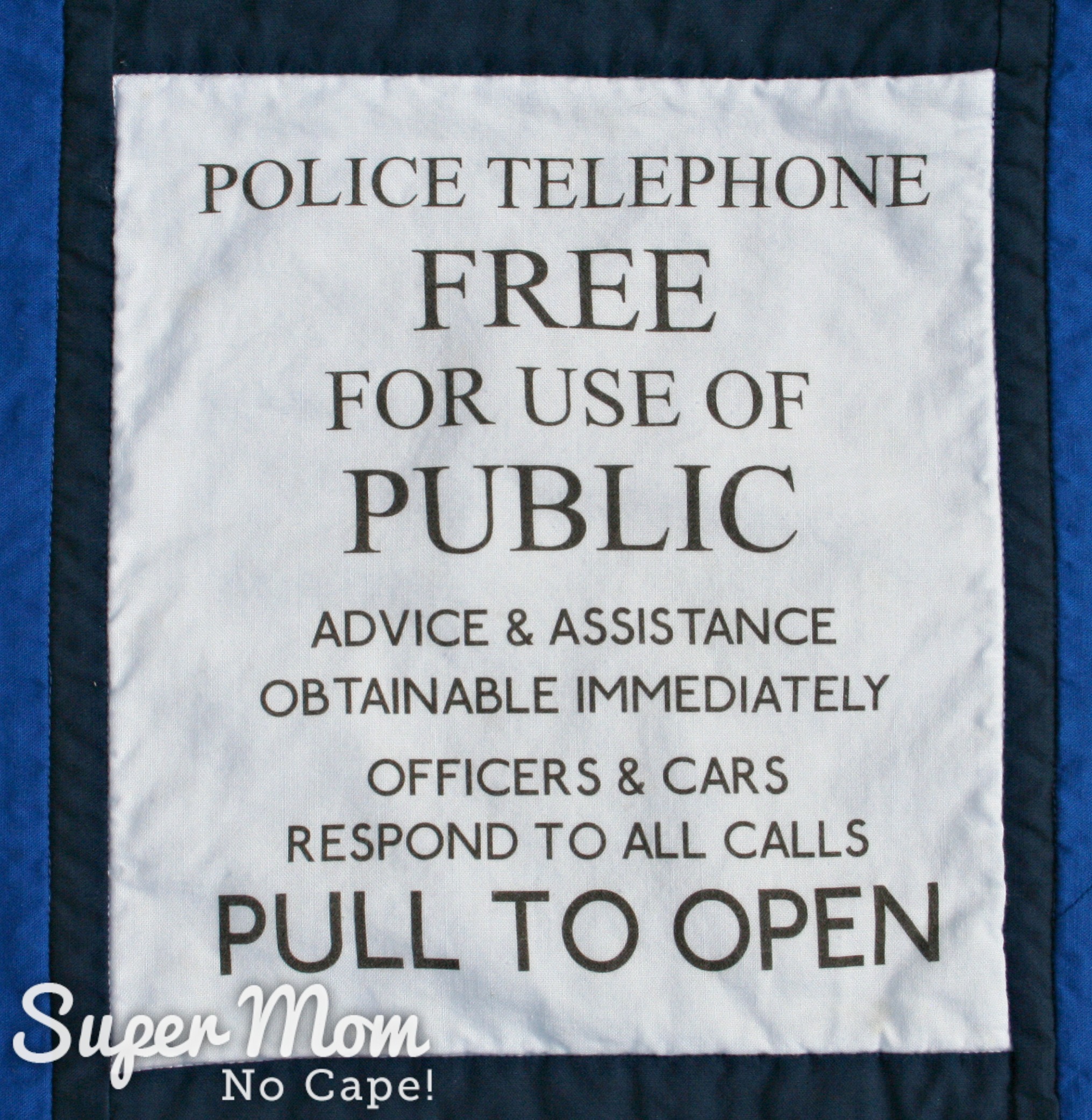 In each of the blank door panels, I stitched Gallifreyan words for our son’s name and four classic Doctor Who words and phrases.

According to my research there is no official Gallifreyan language from the creators of the Doctor Who universe but there is one that was created by Loren Sherman.

Unfortunately, that site has been undergoing updates for the entire time I’ve been working on our son’s quilt, so I used this Gallifreyan Translator.

This is Gallifreyan for Torchwood: 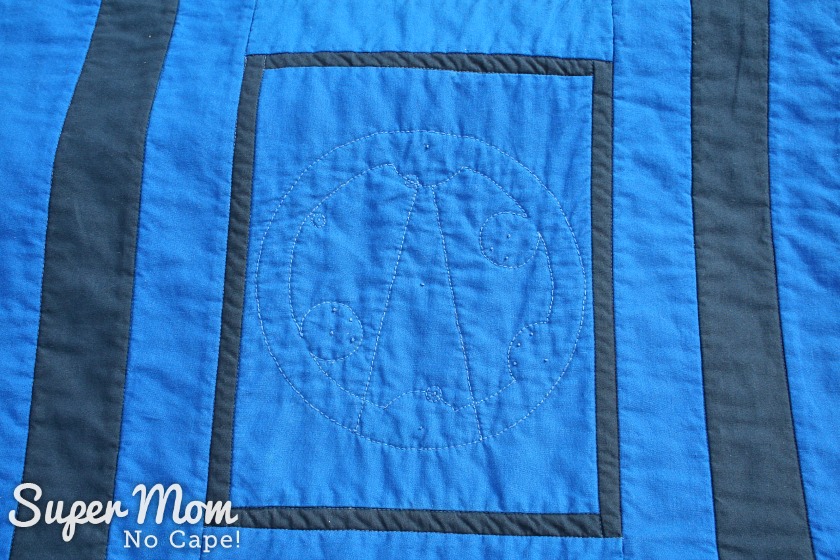 Bigger on the Inside: 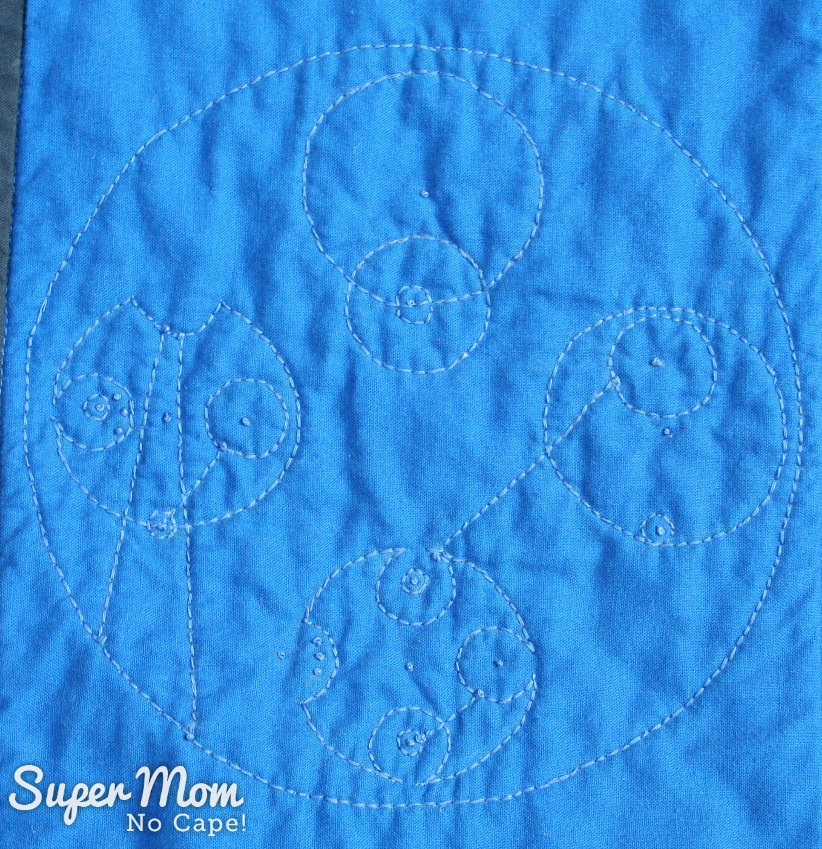 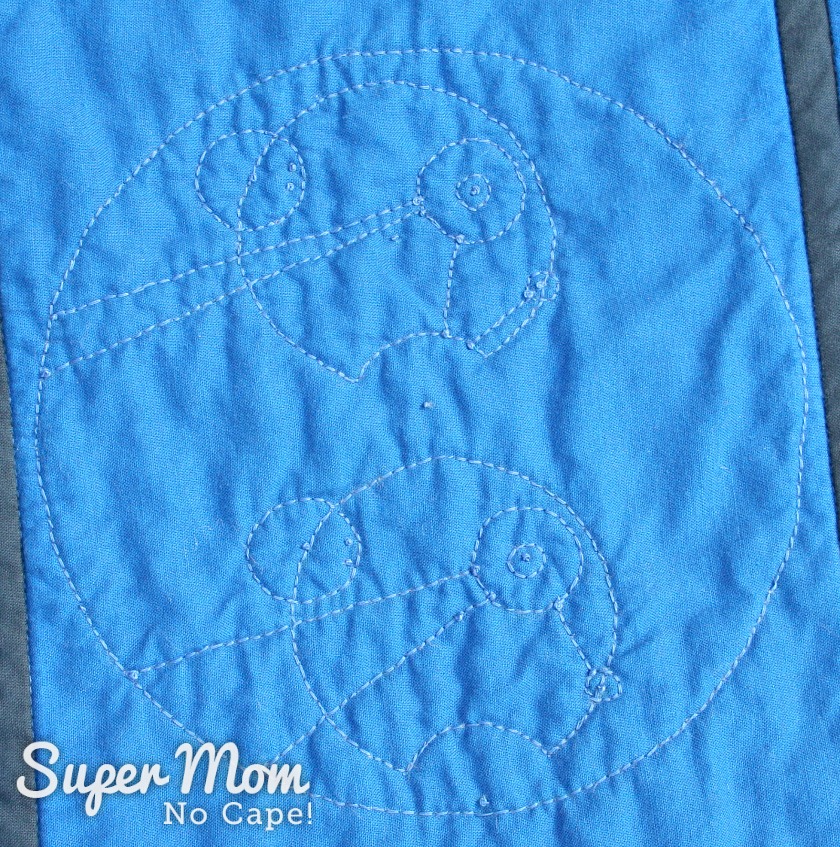 Now, if you’re a Doctor Who fan, you know that every TARDIS must come equipt with a Sonic Screwdriver!

I found a pattern for a foundation paper pieced Sonic Screwdriver on Craftsy. It was free to download from Trillium Design and was one of several blocks from a Doctor Who quilt-a-long which since Craftsy recent closing of several independent designer shops is no longer available.

This is by far the most elaborate and detailed paper pieced block I’v ever attempted. There are 59 pieces of fabric in this 12″ block!

It took me a day and a half to sew each section and then sew the sections together. A lot of unpicking and resewing happened but in the end I’m super pleased with how it turned out, even if the edges weren’t even and needed to be trimmed to square it up. The original plan was to make the sonic screwdriver the quilt label by writing his name and the date the quilt was made, etc on various parts of the screwdriver but after spending that amount of time sewing it all together, I didn’t want to take the chance that I might ruin it and have to start from scratch.

Instead, I embroidered the quilt info on a small scrap of fabric leftover from the TARDIS window panes and stitched it to the Sonic Screwdriver block. 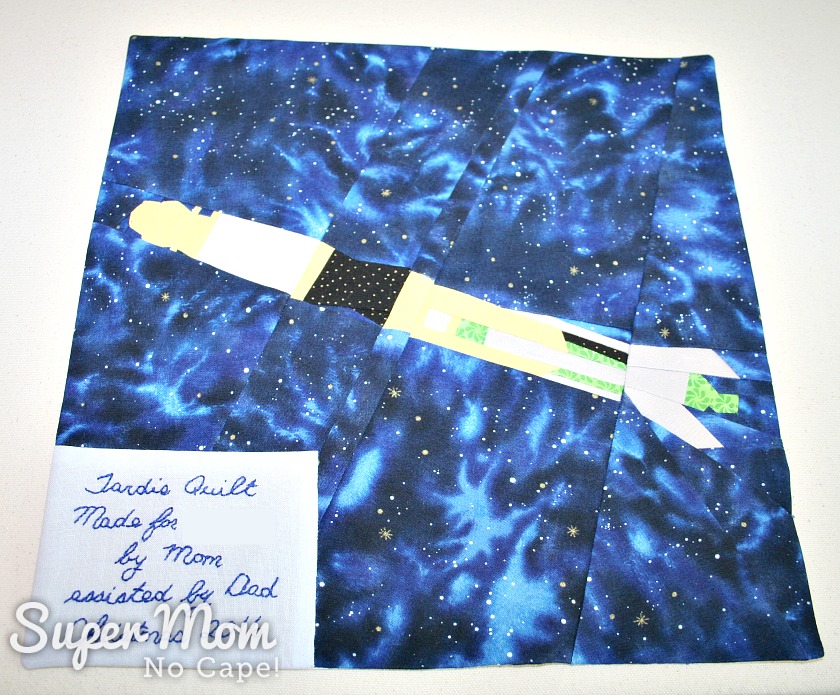 Here it is sewn on to the back of the quilt: 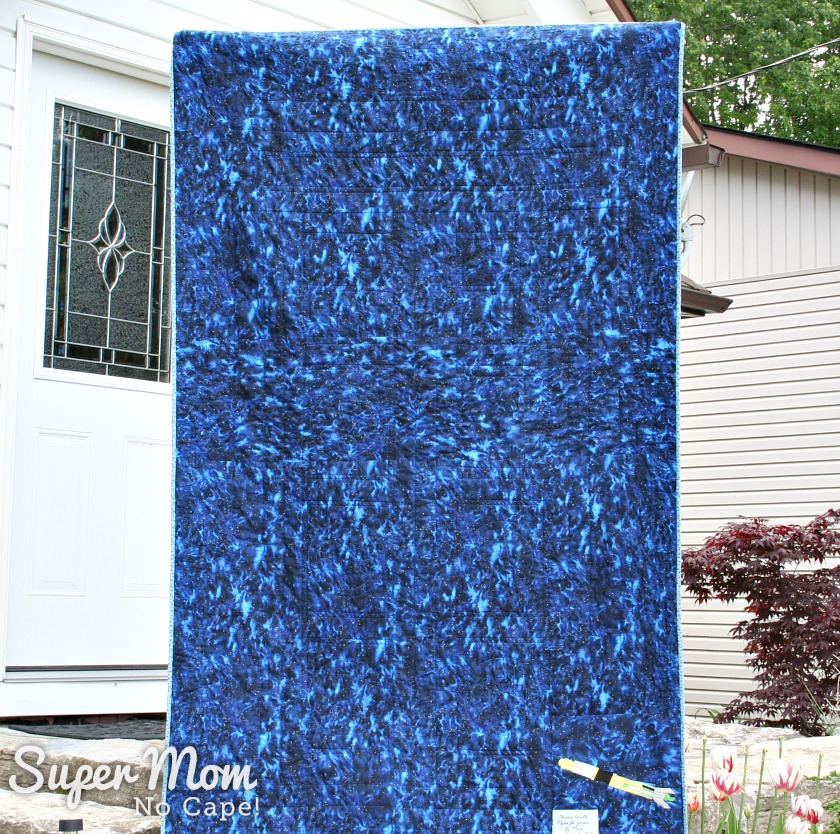 For the above photo, middle daughter was my quilt holder upper. 🙂

And isn’t that the perfect fabric for the back of TARDIS quilt!! I may have squealed just a bit the day I found it at Jo-ann’s.

One more photo of the finished quilt taken before it went to it’s new home with our son: