This year Christmas gifts were small, mostly handmade due to the expense of our move and with the exception of this first gift that I’m going to show you, they were made from fabric I had on hand.

I usually start by sharing the gifts I make for our oldest daughter but her package won’t arrive in Shanghai for a while yet so I’ll begin instead with the gifts I made for our middle daughter.

Back in the summer, middle daughter mentioned that she would like new oven mitts and hot pads as the ones I’d made her several years ago had seen better days. She also requested that they have frogs on them. I searched several shops looking for frog fabric that wasn’t intended for little ones. Finally I found the perfect one for her. 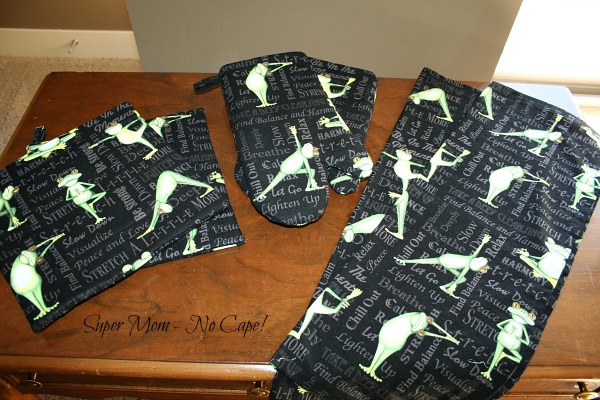 Aren’t those frogs doing yoga the cutest ever! They were especially suited for her as she loves doing yoga.

To make the pattern for the oven mitts, I just traced around one of my oven mitts and added a 3/8” seam allowance. The fabric for the hot pads was cut at 12” square. The insulating layers are one layer each of Insul-Bright

and Warm and Natural batting

(<-affiliate links). The oven mitts are lined with more of yoga frog fabric.

I had enough leftover to make two tea towels by cutting rectangles 19” X 25” and then doing a ½” double hem all the way around.

I’m pleased to say that she really likes her new froggie kitchen accessories.
When I was researching information about Thimble Pips, I came across some photos of sewing chatelaines and those inspired the idea to try to design one that would include one of my small thimble pips. This is the sewing chatelaine that I gave to middle daughter for Christmas. 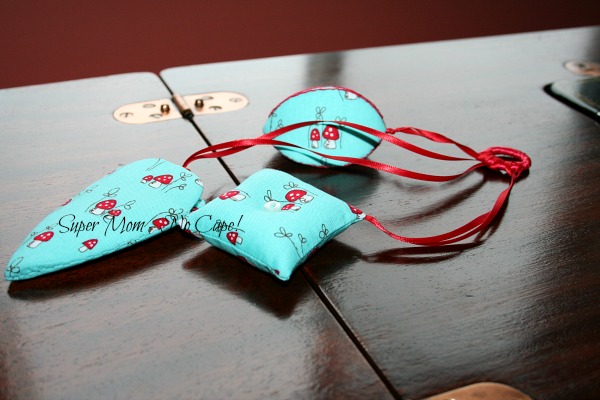 It includes a 1.5” thimble pip, a small pincushion and a scissor holder. I’m still working on variations of what items to include in the chatelaines so I guess you could say that she received one of my first prototypes.

A bit of interesting background information: originally a Chatelaine was the woman who controlled the keys of the household which would be worn on a ring pinned to her waist or clipped to her belt. Eventually those key rings also came to be known as a chatelaine. As time wore on other useful household items such as scissors, thimbles, watches, household seals, etc were added along with the keys and sometimes even replaced the keys entirely.

Another of the traditions that I have chosen to continue is that of the giving handmade ornaments. Every year from the time they were little, I’ve made each of our children an ornament. The idea was that by the time they were grown and ready to move out on their own, they would have a collection of Christmas ornaments to decorate their first (and subsequent) Christmas trees with.

If our children are home for Christmas, they receive them when we are decorating our tree. If not, then I include them unwrapped in the package that I mail to them with their other gifts.

This year’s handmade ornament was, as you may have already guessed, a Christmas Pip. 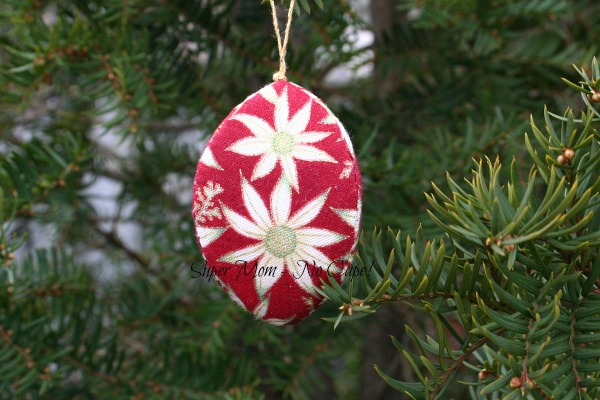 I popped a small foil wrapped chocolate into each pip.

The non-handmade gifts she received were a set of glass tea light holders and in her stocking a cold pack style eye mask, a small statue of a cat playing a fiddle, some chocolates and an orange in the toe.

In the meantime, I wish each of you: