It’s been months since I posted.  Some major life changes have taken place in those months and most of my energy, creative and otherwise has been focused on absorbing and adjusting to those changes.

But I do have some things I wanted to share so I’ll begin this first post of 2011 by showing you what I’ve been working on for the past couple of weeks.  Way back in January 2009, I bought several yards of various Christmas themed fabrics in the after Christmas sales with the intention of making them into gift bags.  But life happened and only a couple of bags got made.  We still had paper gift wrap that we were using up, so there was really no pressure to get them done.  But for Christmas 2010 we were down to the last couple of rolls plus bits and pieces leftover from other rolls.  Many of our gifts ended up wrapped in a hodgepodge of those bits and pieces tapes together to cover whichever gift was being wrapped.

So this year, the gift bags have to be made and that has become my January and possibly February project.  I knew before I even purchased the fabric that in addition to several drawstring bags, I also wanted bags that were a bit more elegant and structured.

Here’s what I’ve made so far: 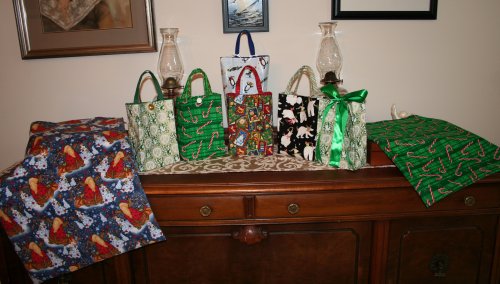 On the left, a large lined drawstring bag, in the middle; four of the six gift bags were made using these instructions and two using the same basic pattern idea but with my own modifications for size and style.  And the folded square of fabric on the right is a Fuorshiki; something I just discovered.

Furoshiki is a traditional Japanese square cloth folded and tied to carry clothes, gifts and other items.  I spent a good hour or more the other day watching videos completely fascinated by the various folding and tying techniques.  I plan to make several.  Not only do gifts look beautiful wrapped in them, they are super simple and quick to sew.

I’m also including some close-ups of a few of the gift bags for those of you who might want to see them in more detail.