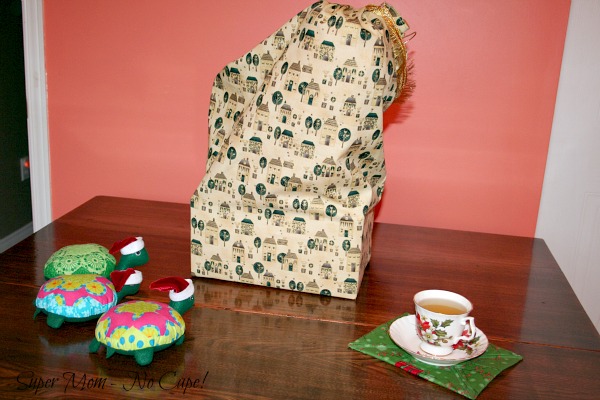 As it often does this time of year, the day got away from me yesterday and I didn’t get a chance to edit the photos of all the amazing gifts that I received from my lovely swap partner Debbie. I’ll post this one now and then sometime this evening I’ll post the gifts I made for her.

I know it’s two posts in one day but I’ve got posts pre-planned for each day this coming week. So I hope you’ll indulge me. After all it is the season for celebrations and a little excess coupled with lots of extra inspiration can never hurt!

This is the third year that I’ve taken part in the Santa Sack Swap organized by Cheryll over at Gone Stitchin. I can only imagine how much work it is to assign partners each year, write posts to keep us all inspired and on track and then to make sure that everyone has received their parcel. Thank you so much Cheryll for all you do to make this such a great swap to take part in!

This year was extra special because when Debbie and I got our emails back in July with our partner assignments, we discovered that we only live about an hour and a half away from each other.

Right away we talked about meeting up and that’s exactly what we did earlier this month.

It was hard to resist squeezing the sack when I got home that day from our brunch so I hid it away in the closet. That way I wouldn’t be tempted.

Last Tuesday, Cheryll announced that Friday would be opening day. First thing Friday morning, I texted Debbie to see if she wanted to open our gifts at the same time. She thought it was a great idea so we agreed that 10ish would be the best time for both of us. She also mentioned that Trixie (the Hexie Turtle she made when she tested my Lexie the Hexie Turtle pattern) would be there too.

Well as you can imagine… when Lexie, Lanie and Rexie heard that they wanted to come too.

So I got everything and everyone ready.

I placed the Santa Sack filled with goodies in the middle of my new cutting table (that I had cleared of all the little piles of fabric, cutting mat and rulers.) Then fixed myself a cup of my favorite herb tea in my favorite Christmas tea cup. Then I lifted the Hexie turtles down from the shelf where they live and we all waited for Debbie’s text.

When we met to exchange our gifts, Debbie had explained that she chose the beautiful house fabric to represent gifts from her house to mine. Isn’t that just the perfect sentiment for this time of year!

Then right around 10 am, Debbie texted to say she was ready. It was finally time to start opening!

I can tell you, I was just as excited as the Hexie Turtles to see what was inside that sack. 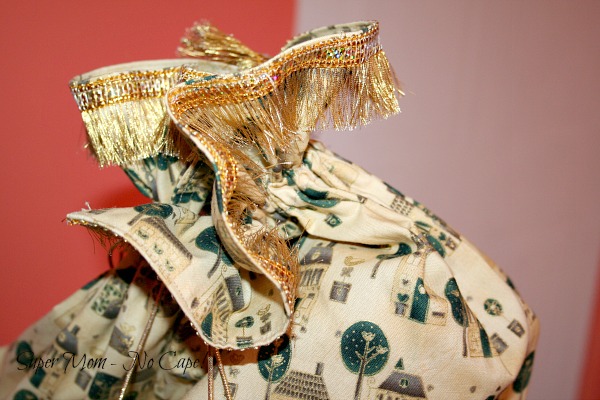 I told Rexie that they weren’t actually Santa’s pants. They were a gift bag sewn to look like Santa’s pants but I don’t think he quite believed me. 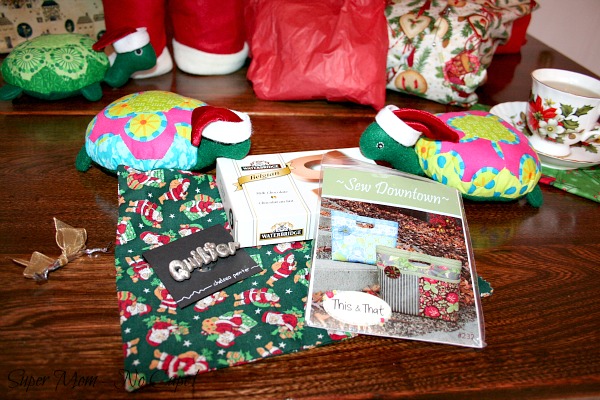 I love the “Quilter” pin and will be adding it to my winter jacket. My initial in chocolate didn’t last very long! And it looks like I have some bag sewing in my future!

The small package wrapped in red tissue was opened next.

Lexie and Lanie agreed to hold it up so that you could see it better. 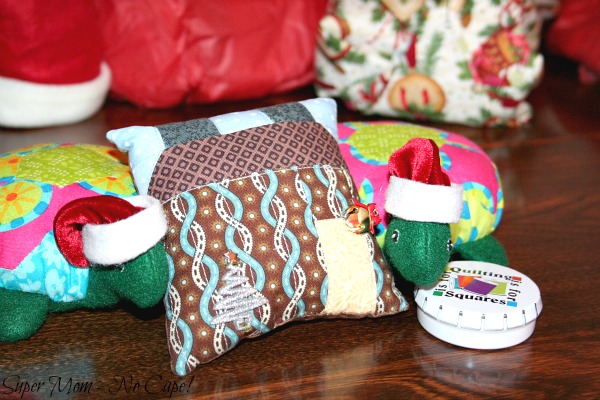 Isn’t the house pincushion just so sweet with the silver Christmas tree and the bell over the door! And pins to go with it.

After that I opened the gift wrapped in the pretty Christmas ornament fabric: 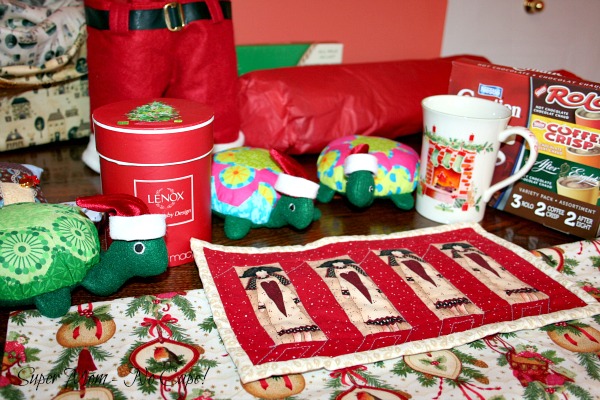 Here’s a close-up of that lovely Angel mini quilt: 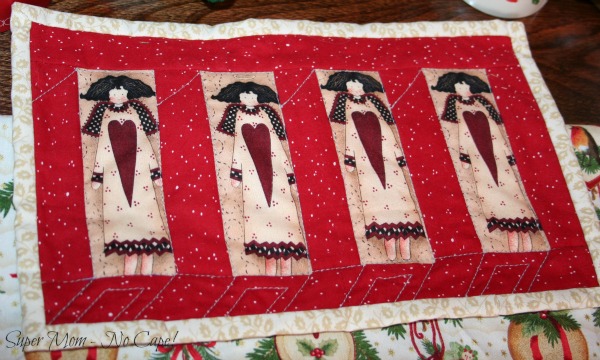 A few happy tears made it difficult to see to text Debbie to tell her how much I loved it.

As it was included with the pretty Lenox mug and hot chocolate, I’m assuming that Debbie intended it to be a mug rug. But I just can’t imagine myself putting a mug on top of one of those angels and taking the chance it might get stained.

I hope she doesn’t mind if I add a hanger to the back so it can be the start of my mini quilt wall. I’ve been seeing so many mini quilt collections appearing on the various blogs and thought it would be fun to make one too. Debbie had stuffed each of the legs of the Santa pants gift bag with a red tissue wrapped package. 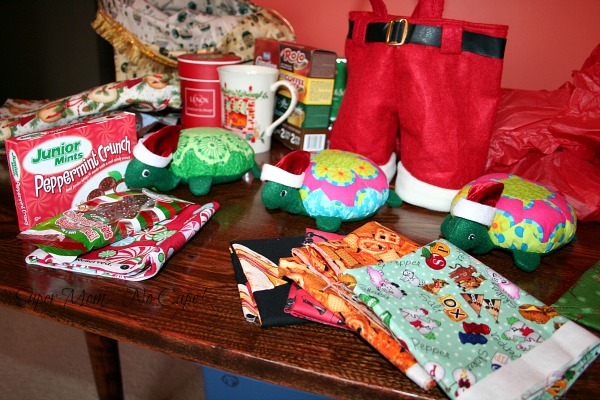 One contained 4 fun novelty print fat quarters and the other held another cute fat quarter with peppermint candy to go along with the peppermint Junior mints and a peppermint marshmallow Christmas tree.

And then came the biggest surprise of all that touched my heart and brought even more happy tears to my eyes. She used so many different Christmas prints that I just have to show you a photo of each of those trees! 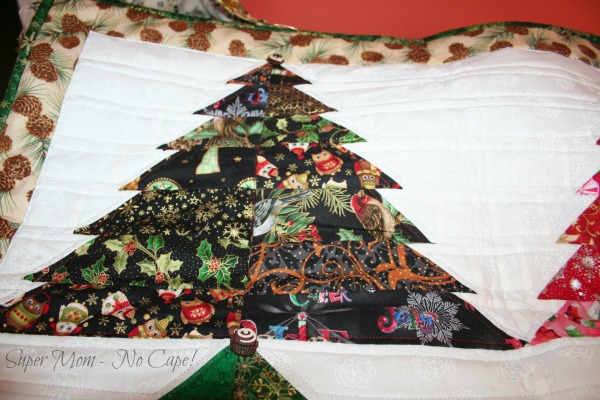 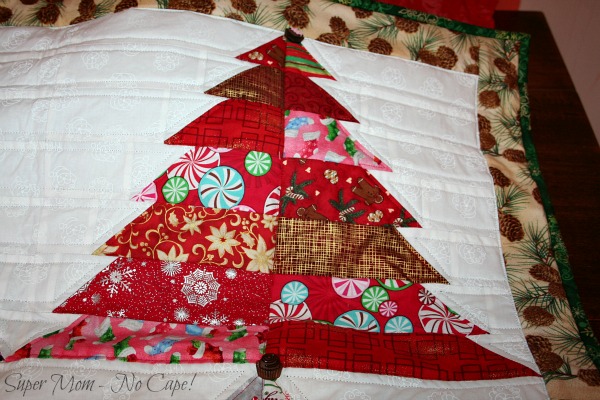 And last but definitely not least… the white tree: I was so involved in looking at all the different prints in the trees and then discovering that the background fabric of white on white with little Santa faces was actually more trees that I didn’t realize at first that I’d covered up the Hexie Turtles! 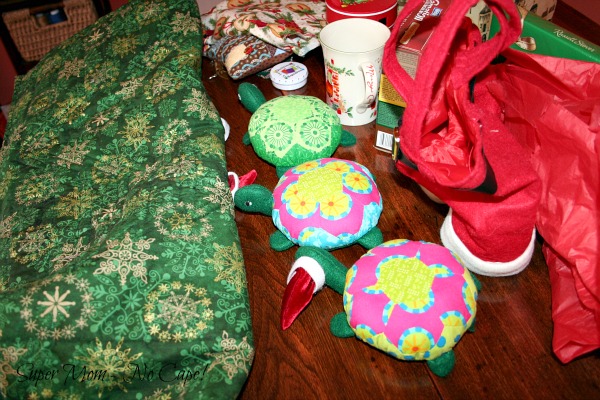 And here are all those amazing gifts laid out on the table: And just look at where those silly turtles have gotten themselves… On a bit of a silly note myself regarding those Santa pants, you have to know that I had the most difficult time trying to figure out how to word this post without actually saying “Oh, look what I found inside Santa’s pants.”  I just couldn’t help but giggle.

So thank you Debbie for the extra laughs and thank you for all the beautiful, heart-touching gifts. But thank you most of all for being a new friend who I look forward to getting to know even more.