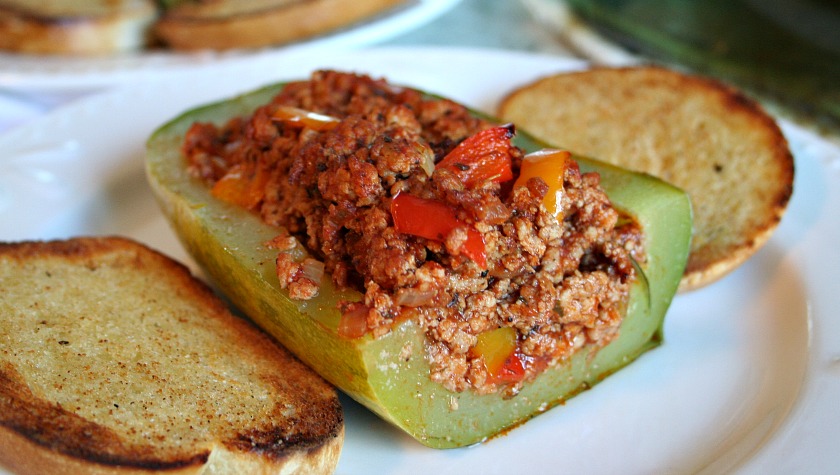 Did you grow an abundance of zucchini this year? There always seems to be a few that get missed when you’re picking them that grow too large for slicing and frying or even to make zoodles.

Or perhaps friends and neighbours have been offering you a share of their over abundance of zucchini.

When I picked up corn on the cob to freeze for winter, the farmer asked if I wanted a couple of zucchini for free.

As you can see… they’re a good size. Way too big for spiralizing but the perfect size for stuffing. Cut one zucchini in half lengthwise. 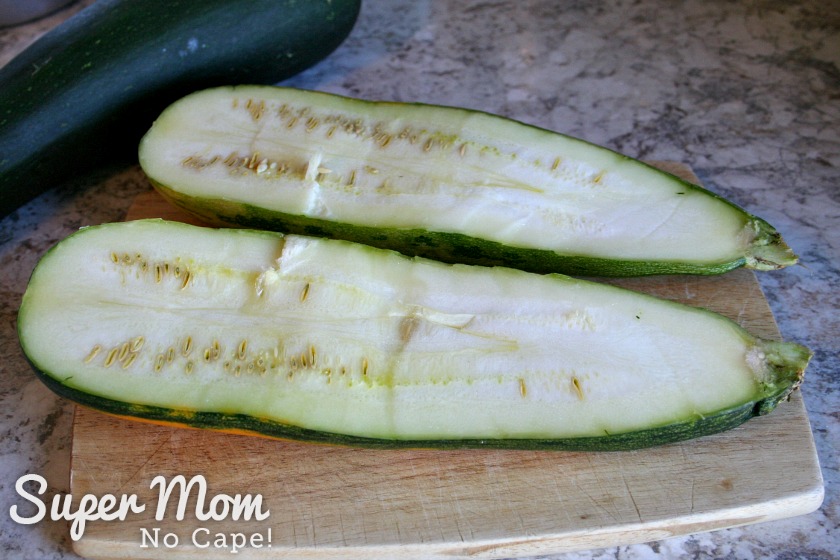 Hollow out the zucchini halves leaving as much of the flesh as possible. Chop half a cup each of onions and peppers.

I had frozen chopped peppers so I used those. 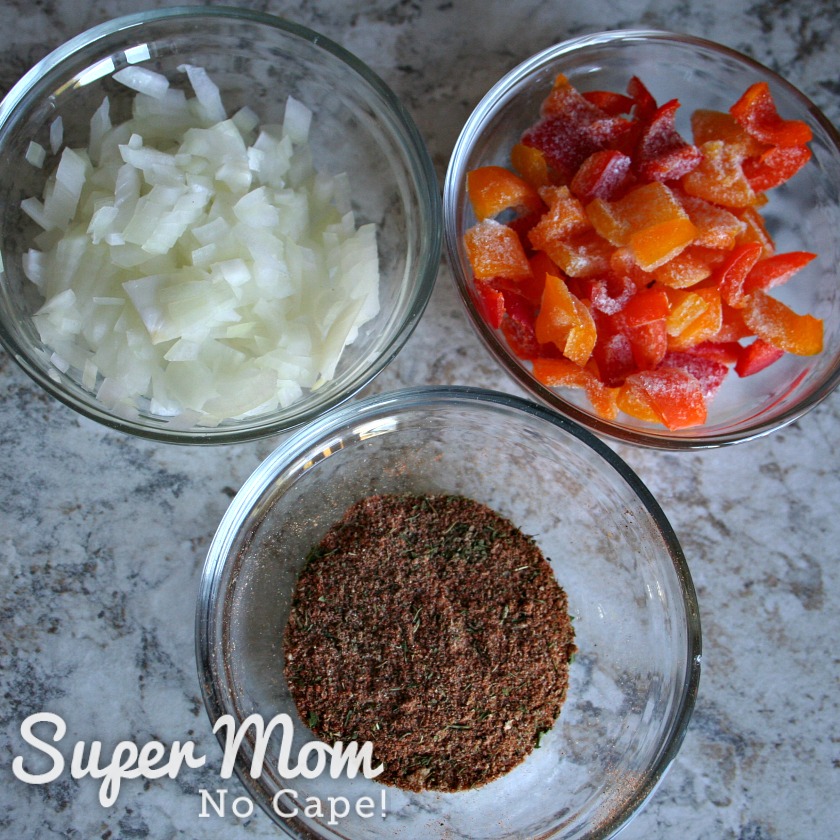 Scramble fry the ground pork (or whatever ground meat you’re using) in a frying pan. Add the spices, onions and peppers. 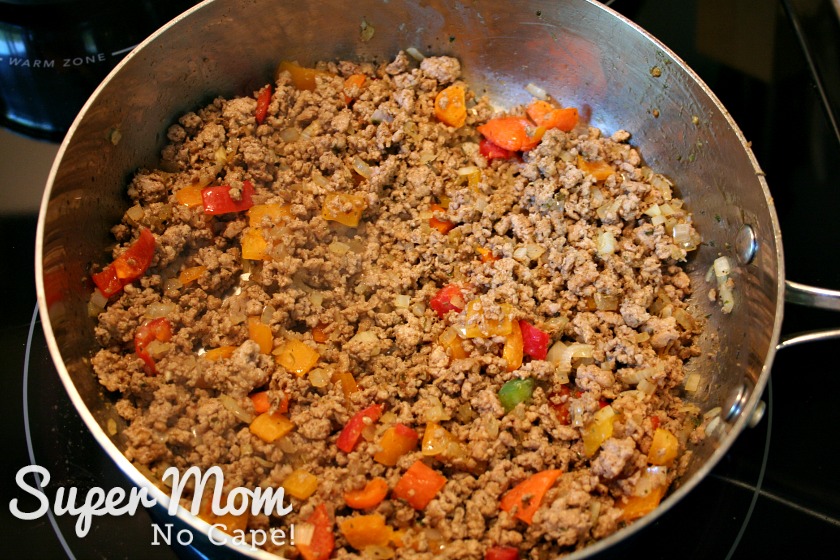 Fill the hollowed out zucchini halves with the sausage meat mixture. 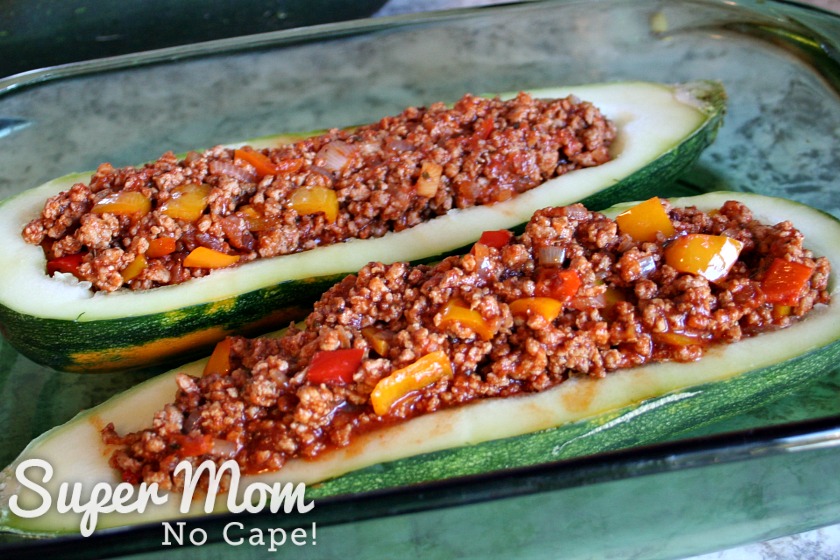 Bake at 350ºF for between 30 to 40 minutes until a fork can easily be inserted into the flesh of the zucchini. 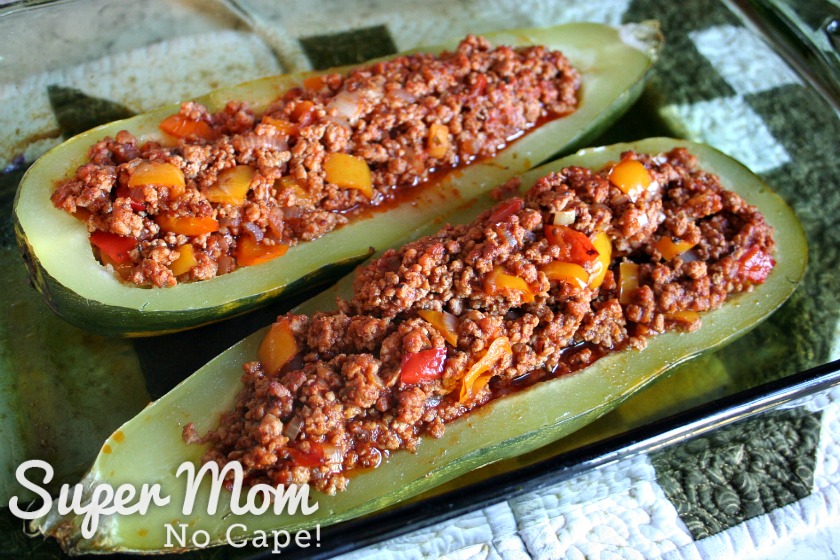 Cut the Sausage Stuffed Zucchini Pizza Boats in half to serve as one is usually too much for a single serving. 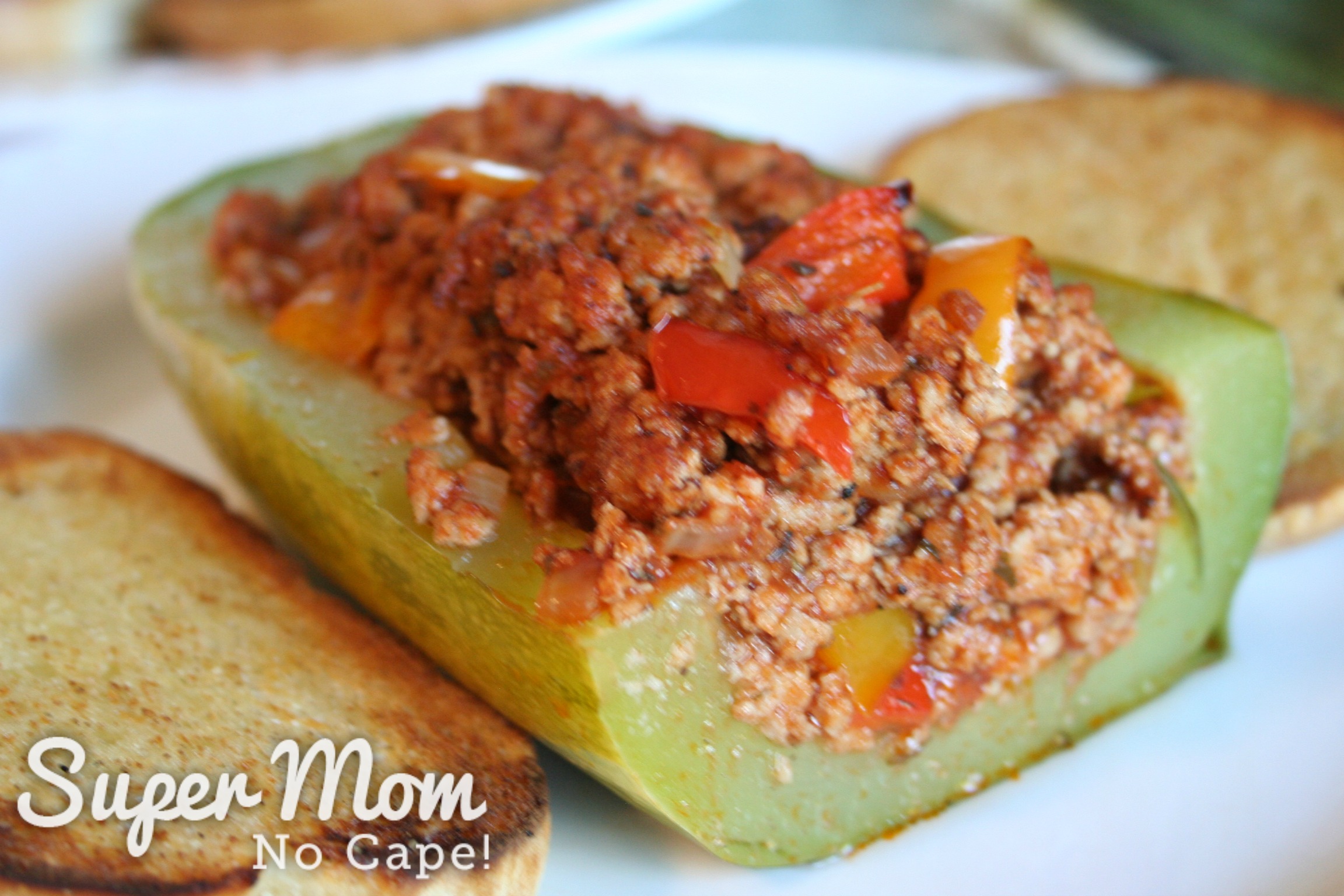 Any extra zucchini can be grated and frozen in recipe sized portions.

For that second large zucchini given to me by the farmer, I’ve measured out one cup of grated zucchini into snack sizes bags to be used this winter to make zucchini bread. 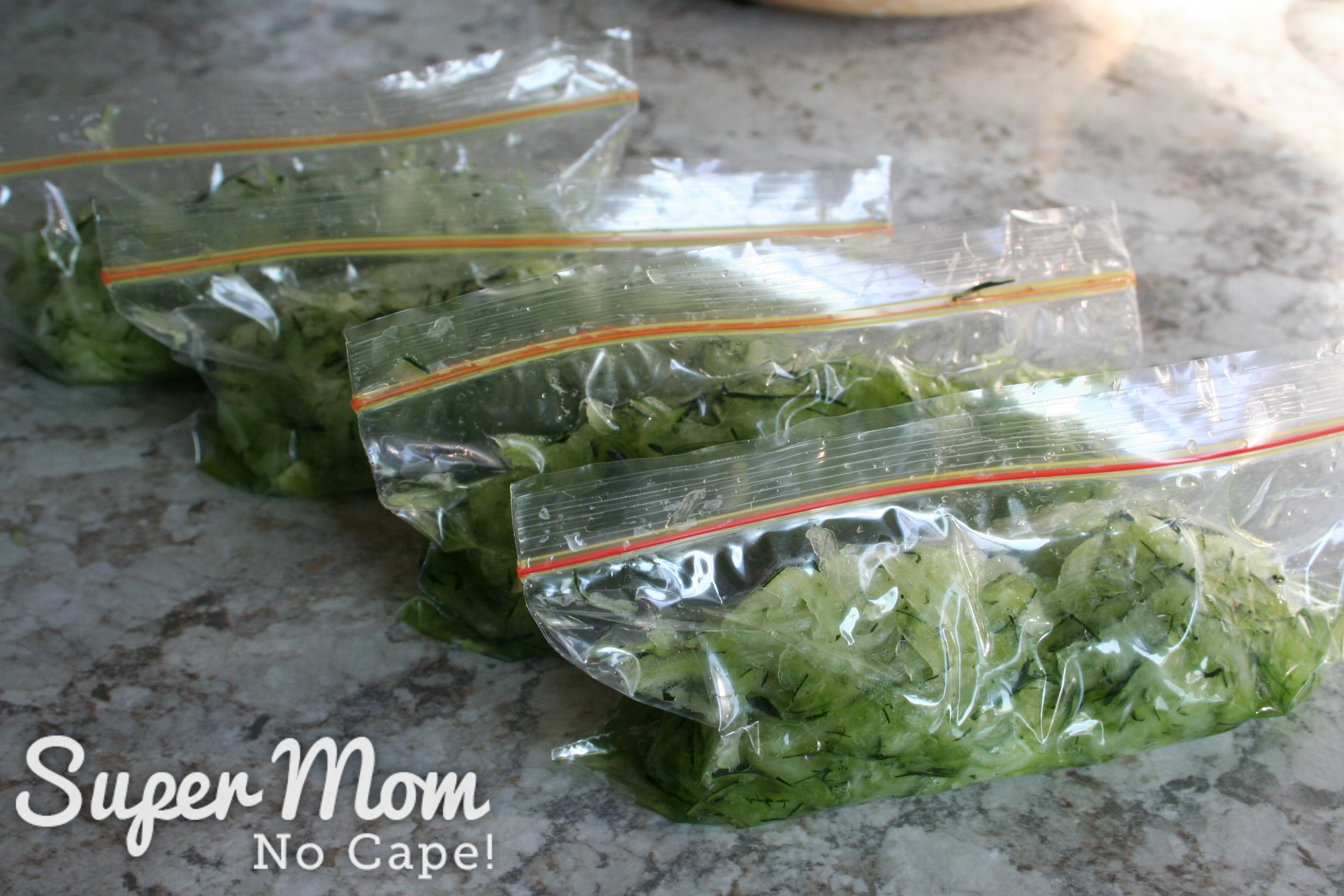 Be sure to save the recipe for Sausage Stuffed Zucchini Pizza Boats to your favorite recipe board on Pinterest.

Oh and when you do make the recipe, please post a photo somewhere on social media and tag me so I can come see and comment. 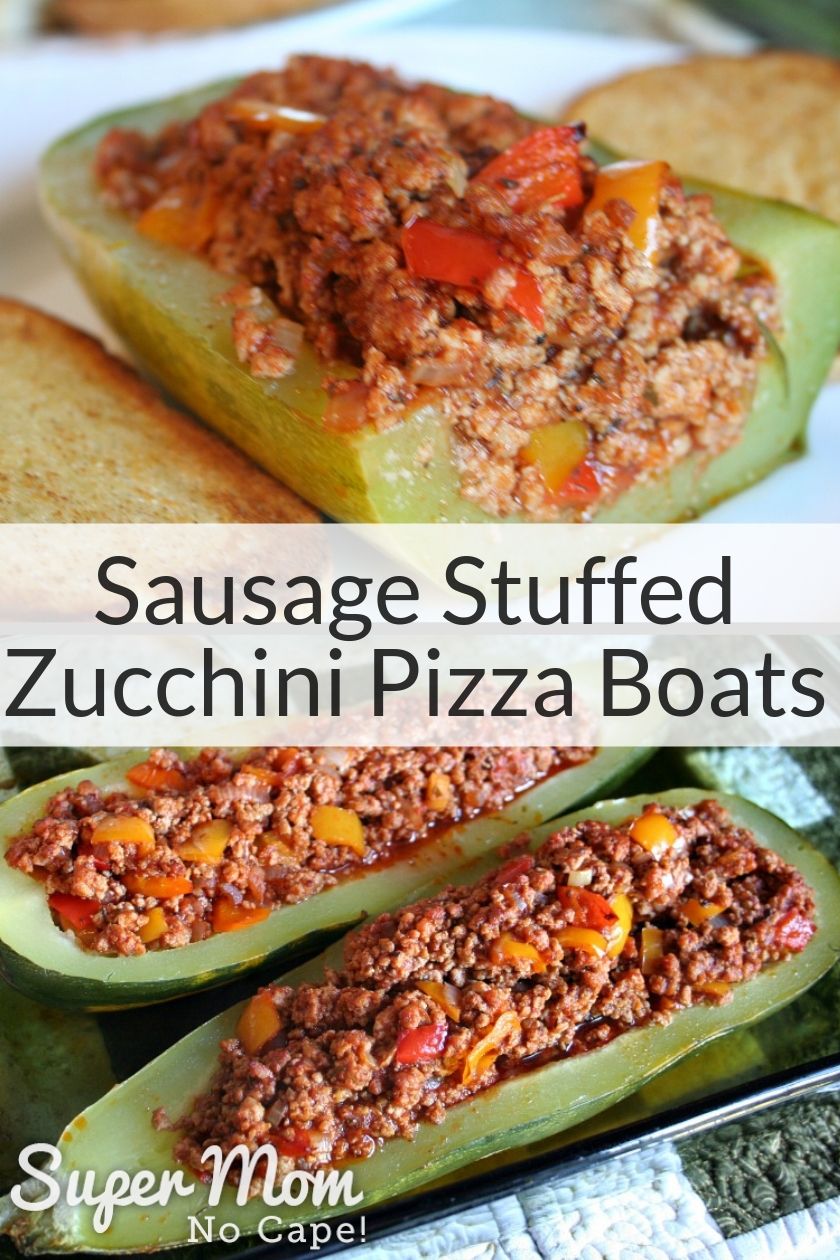 1. Cut one zucchini in half lengthwise.

2. Hollow out the zucchini halves leaving as much of the flesh as possible.

3. Chop half a cup each of onions and peppers.

4. Scramble fry the ground pork (or whatever ground meat you're using) in a frying pan.

7. Fill the hollowed out zucchini with the meat mixture.

8. Bake at 350ºF for between 30 to 40 minutes until a fork can easily be inserted into the flesh of the zucchini.

9. To serve, cut the Sausage Stuffed Zucchini Pizza Boats in half.

The nutritional information provided is approximate. If you need more accurate info, please make the calculations following whatever nutritional guide works best for you.