My little Christmas Mouse wall hanging has been framed with teeny, tiny half square triangles (hst.) Each hst finishes at just 1 ¼” square. When finished the wall hanging will be 13” square.

The plan for the frame changed slightly since I posted the graph paper sketch on Saturday. 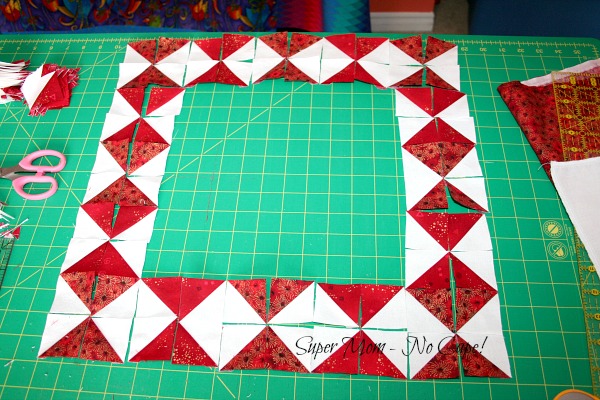 When I was originally designing it, I was going to use only the red print with the little gold star bursts but I had some of the red LB Basic Glitter by Laurel Burch for Clothworks left over from making my Holiday Celebrations quilt top sitting on my cutting table and the two looked really good together so I decided to alternate the two reds in the frame.

But in order to make that work out, I ended up removing one block of 4 hst from each row. The smaller frame also meant that I didn’t need the narrow inside border that was in the original sketch either.

It is now hand-basted and ready to quilt. 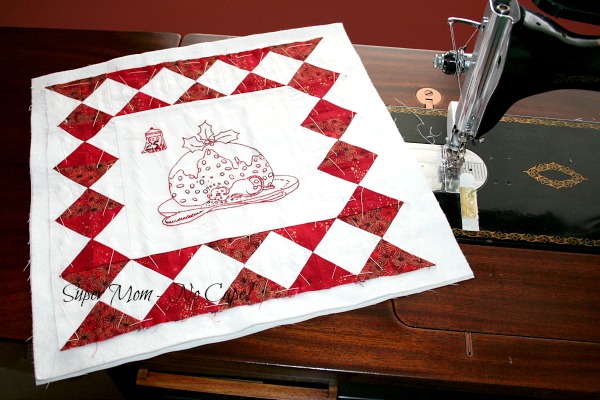 I’m hoping to have this finished by next Tuesday so that I can check it off my 2015 Finish Along Q1 goals.

Can you believe we’re almost a third of the way through the year already?!

I’ve been so busy working on other projects that I still need to quilt and bind the placemats that I chose as my A Lovely Year of Finishes March Goal.

Over the next week, I’ll be deciding what projects to include in my 2015 Finish Along Q2 goals as well as choosing my April ALYofF goal.

But all that will have to wait another day as I’ve got something really fun in the works. (Those who follow @supermomnocape on Instagram got a sneak peak at the first stages of one of them.)