Recently, I crocheted some Prosperity Angels and a crocheted tree ornament where the pins I had used to block them with while the stiffener dried had rusted. Well, when I removed the pins, the rust was even worse than it appeared in the photos I posted.

I tried everything I could think of to get those rust marks out. The thing that worked the best was dishwasher liquid. But in the end, I was only able to salvage two of the Angels. The rest I was unable to get all the rust marks out of and as I’m a bit of a perfectionist and even the tiniest of marks was bothering me, I ended up throwing the others away.

Monetarily, it wasn’t a huge loss as white crochet cotton isn’t that expensive. But each of those Prosperity Angels takes me at least an hour and a half to crochet from start to finish.

Now one of the great things about the internet is that when you have a problem, you can often find a solution by doing a quick search and learn something new in the process. I found a website about blocking crocheted snowflakes in which she explains that she only uses stainless T-pins to block her snowflakes with.  She also goes on to add that when she went looking for t-pins lately she’d only been able to find nickel-plated ones which have a tendency to rust.

(Edited to add:  that website is no longer available so I have removed the link)

Sure enough, when I checked the box of pins I’d used, even though they were clearly marked rust-proof, on the bottom of the box in tiny print it says they are nickel plated. The pins I have used for years to block crocheted ornaments are packed away in storage. I had purchased those pins because the packaging said they were rust-proof and I wrongly assumed they would be the same quality as the ones I’d been using for years.

Her recommendation to use stainless steel t-pins sent me off on another search. I found what I was looking for at lacis.com.  I ordered one package of: Stainless Steel “T” Pin, 1.2″ #20 (.036) Stainless Steel “T” Pin, 1-1/4″ long, box of 100 pins to try them out.  At $8.00 per box, they aren’t cheap, but when you spend hours working on projects the last thing you want to worry about are the pins rusting when you go to block them. Shipping is free within the US but there is a $4.50 handling charge on all orders.

I’ve used the pins now on five different projects and am pleased to say I’ve had no rust marks on any of them. I’ll be ordering more pins from lacis in the near future.

Another helpful tip I took away from the above website about blocking snowflakes was to use the cardboard cores from fabric bolts as blocking boards. Now I’ve always used a Styrofoam sheet, but those can be quite expensive and the cardboard cores are often free for the asking.

So the last time I was at Joann’s I asked if they had any extras. The lady behind the cutting table said I could have as many as I wanted.  I came home with four but if I was making Angels or other ornaments to sell like I did in the late eighties/early nineties, I would have taken several more.

Today, I thought I’d share how I go about stiffening and blocking my crochet thread ornaments.

Before stiffening and blocking, I wash my crocheted piece in warm water with a few drops of Ivory Dish liquid (the kind for washing dishes by hand.) This removes the oils that come from your hands when making the item and also any other “dirt” the crochet thread may have accumulated over time. Then I rinse it thoroughly in cold water, squeeze out the excess water and lay it flat to dry.

When I’m blocking my Angels I use a blocking template I’ve created (and which I provide with the pattern.)  I print out however many templates I need, tape them to the blocking board that I then cover with plastic wrap.

For the snowflakes I’m showing you today, I used this blocking template.  The spokes and evenly spaced circles radiating out from the center make it very easy to evenly block and pin them. 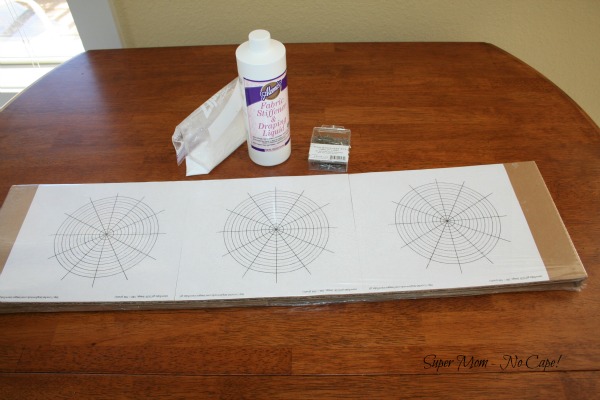 I think everyone who crochets ornaments probably has a favourite starch/stiffener. I have two that I’ve used successfully in the past.  One is called Stiffy and the other is Aleene’s Fabric Stiffener and Draping Liquid

. (<-affiliate link) When using the Aleene’s, I add some water to thin it out a bit.

Then I allow the snowflakes to dry completely.

And here they are dried and arranged “artfully” in a small bush behind our apartment. 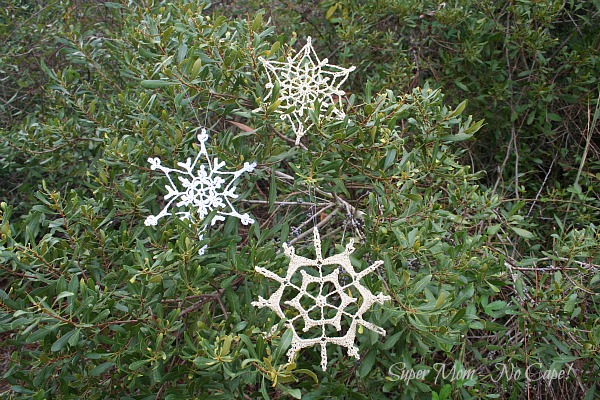 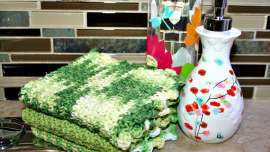 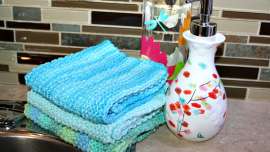 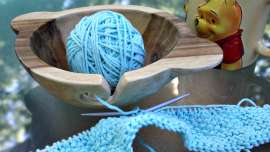