The Cosmopolitan Cocktail – A Modern Classic

Whether you’re planning a romantic evening at home or sharing a nightcap after an evening out, this blushing pink Cosmopolitan is the perfect cocktail for a date night for two.

I have a confession to make, it was only recently that I tasted one for the first time.

I know, I know, you’re probably wondering if I’ve been living under a rock for the past 20 years. After all, it was apparently the drink of choice of the starring characters in Sex in the City. Something I only learned when I started researching to write this post.

Just as I’d never had a Cosmo, I’ve never watched a single episode of that popular late 90s, early 2000s show. It isn’t like I hadn’t heard of Sex in the City, I was just too busy during those years raising a family for it to be of much interest to me.

And it’s not that I had never heard of a Cosmopolitan. While it may have been made famous by the hit show, there’s debate about when and by whom it was created. The drink in it’s current formulation has been around since at least the late 1970s.

It’s just that if I’m going to order a cocktail while out for supper or a get together with friends, I’m more likely to order my all time favorite cocktail, the Mai Tai.

But as it happened, the restaurant where Dave and I went for our 36th anniversary supper had a very small selection of cocktails from which to choose. I’d tried all the others, so I opted for the their Clock Tower Cosmo.

Or if you don’t have a cocktail jigger…

Chill your cocktail glasses by filling them with ice cubes. Fill with ice and shake for about 20 seconds. 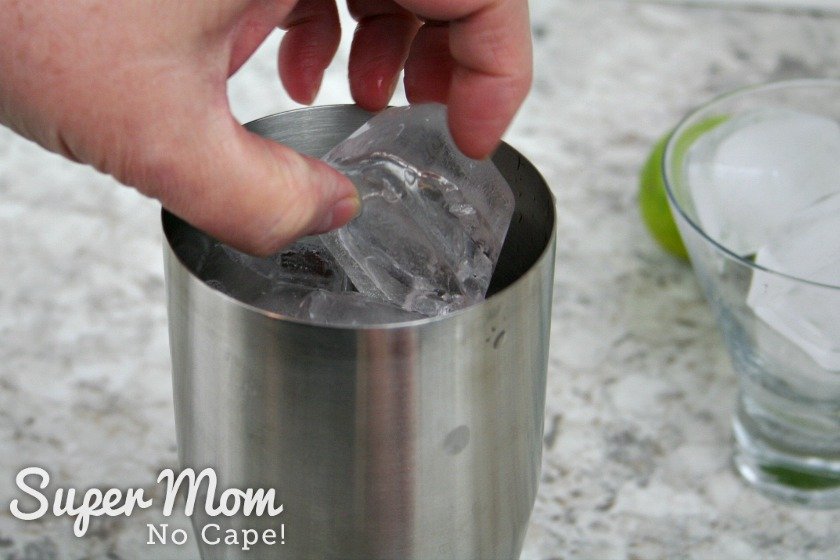 Quick tip: Wrap a tea towel around the shaker. It gets cold really fast!!

Pour the mixture into a cocktail glass and enjoy! 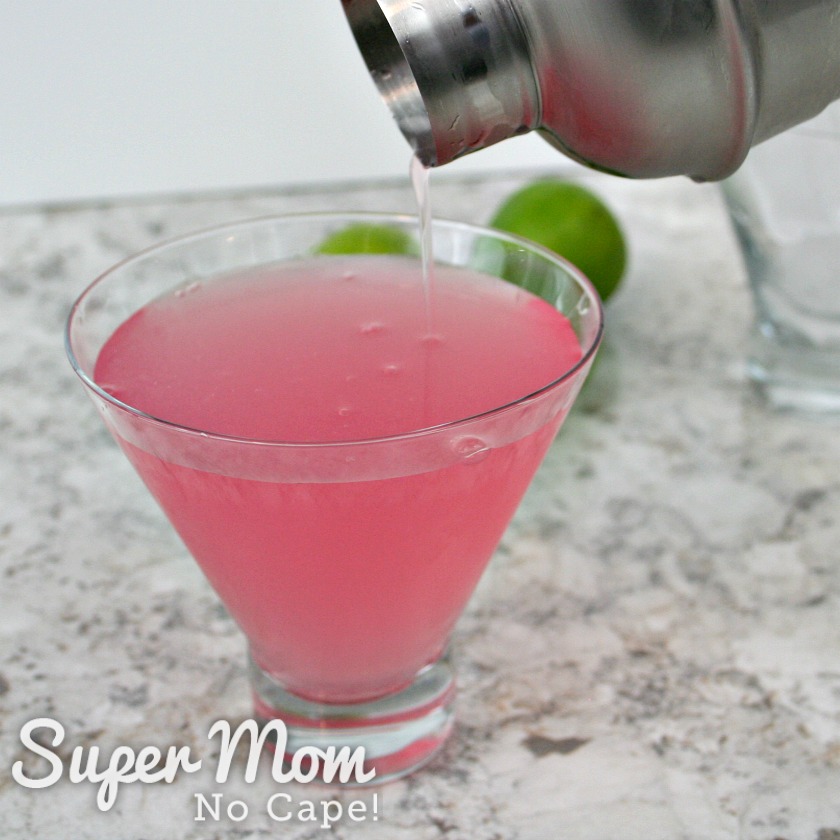 The recipe above is enough to fill one of those pretty 7. 5 oz stemless martini glasses.

So if you’re making one for each of you, you’ll need to double the recipe above.

However, if you’re using a pair of vintage 3 oz martini glasses, the recipe should be enough to fill both.

To make the drink look like one you might have ordered in a restaurant or lounge, I’m including how to make three different cocktail garnishes.

To make simple lime rind curls as pictured above, cut a slice 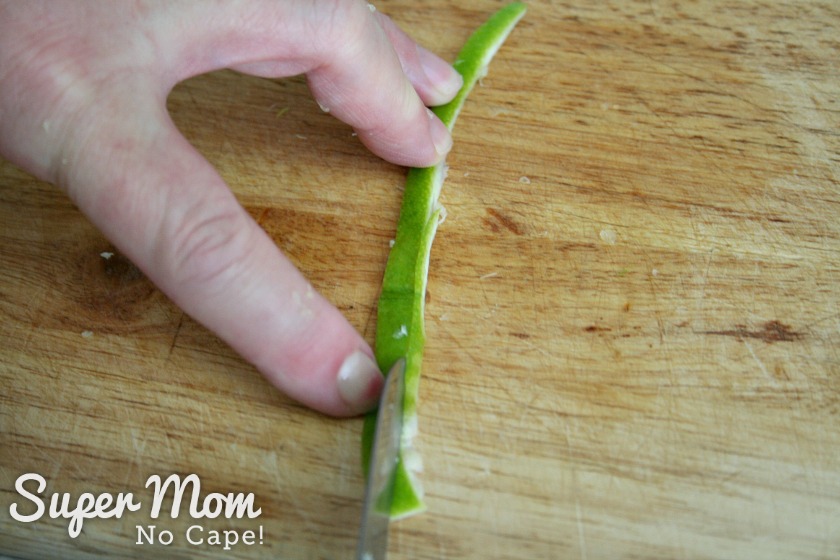 Wrap the rind around a stainless steel straw. 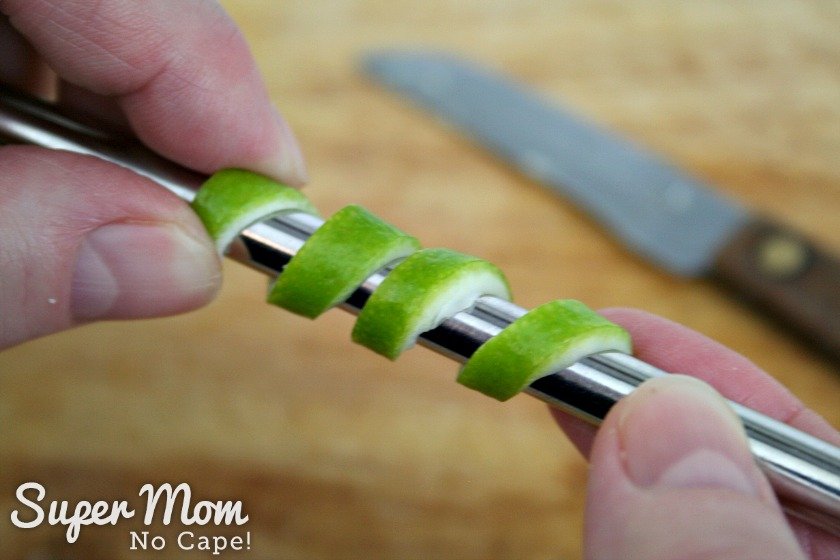 Hold for a few seconds so the rind retains the curl, then add to the rim of the glasses. 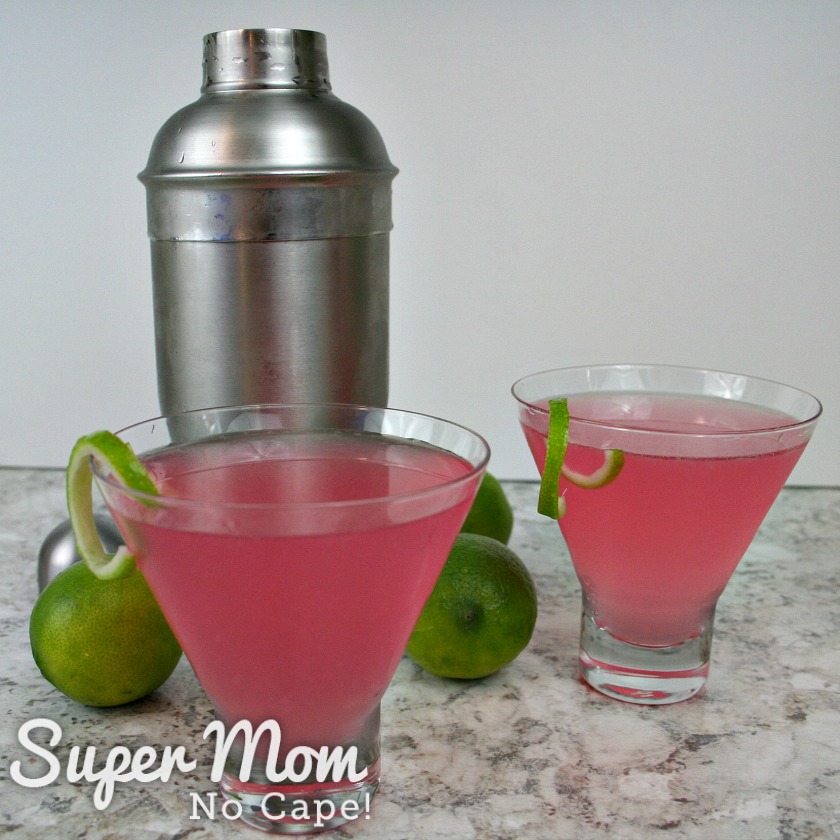 To make a heart garnish, cut the rind off of a slice of orange. In

sert a toothpick into either end of the orange rind as pictured below. 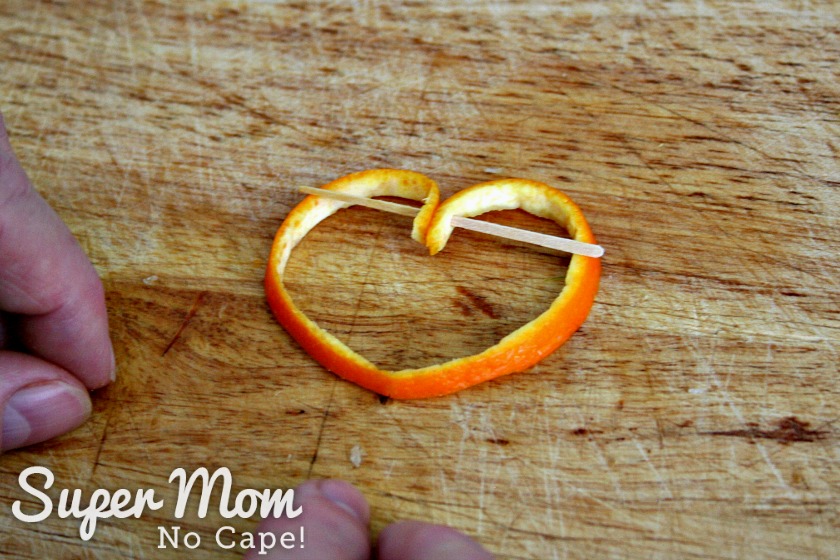 Gently squeeze a point in the bottom. Be careful not to squeeze too hard or you’ll break the rind. Place the orange heart garnish on the rim of the cocktail glass. 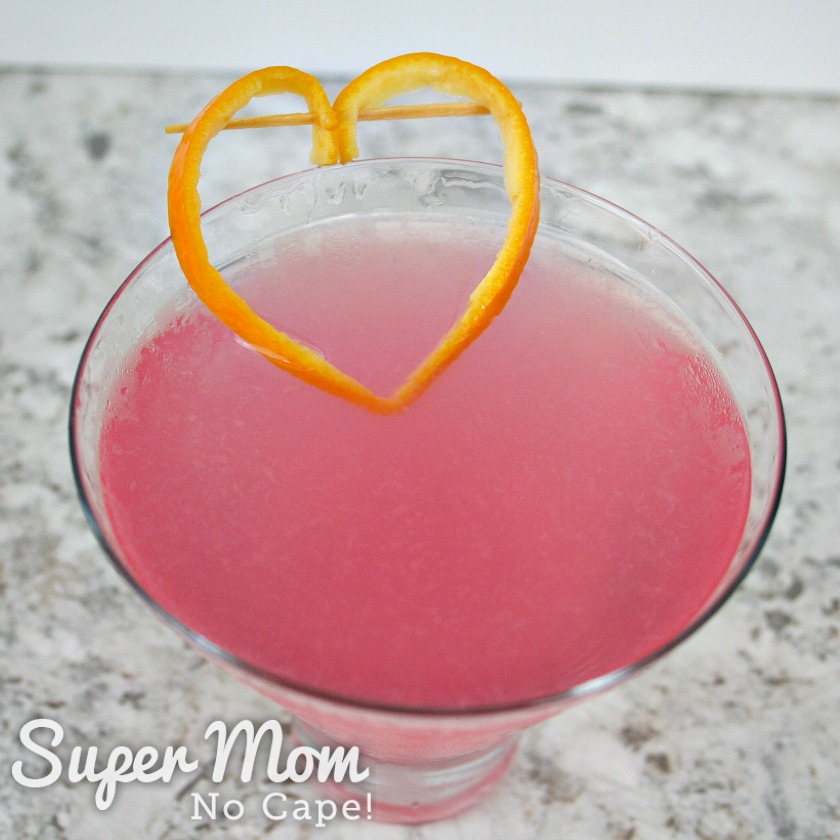 If you want to really impress your significant other, you might like to try making a lime rind fan.

ly as professional looking as the lime fan in the video that inspired me to try, but I think it turned out pretty enough!

Cut a slice off either end of a lime.

Insert the tip of your knife between the rind and the inside of the lime. Cut all the way around. Turn the lime around and do the same on the other end until you’ve cut all the way through. Push out the inside of the lime.

Cut the lime rind in half along one edge and spread it out on the cutting board. If the edge is a little jagged, trim neatly. Scrape as much of the pith off the rind as possible without breaking through the rind. Next, cut a series of slits in the rind, starting and ending approximately an inch from either end. You’ll end up with a piece that looks like this. Now, cut a slice of rind and push it onto a toothpick. 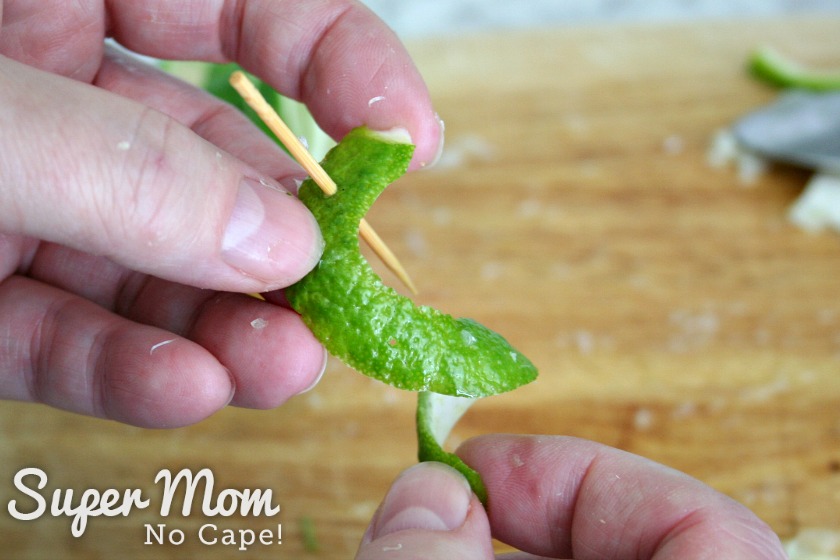 Bring the two ends of the sliced lime rind together to form a fan and push the toothpick through the bottom of the fan. 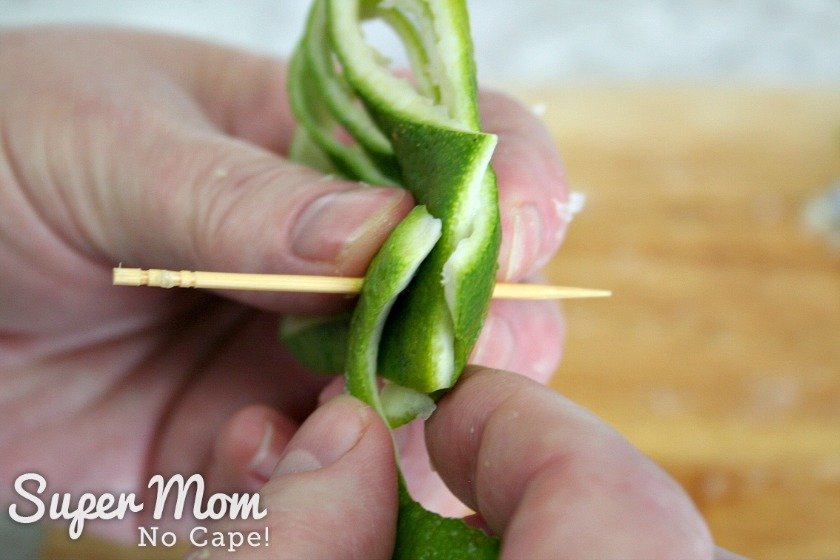 Give the slice of rind a twist and push the other end onto the toothpick. If you’re making this during the holidays, add a sugared cranberry on either side of the fan. 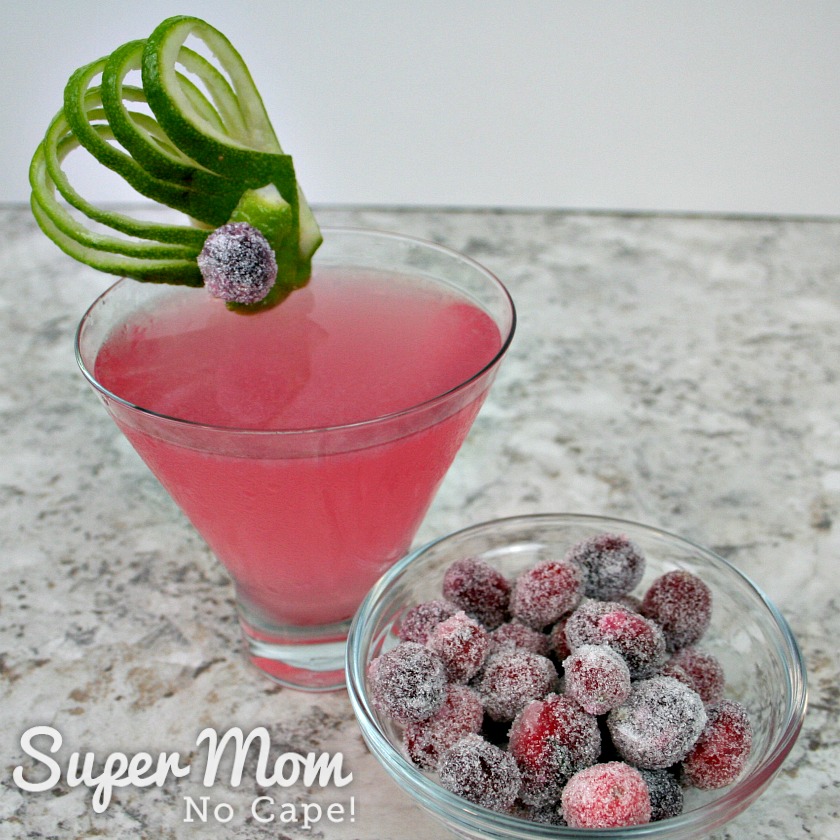 The cranberries help to balance the lime rind fan on the edge of the glass.

Other times of year, you could add a grape or half a strawberry. There are 4 oz of liquor in each Cosmopolitan so they’re going to have a kick. This is a drink to be sipped slowly and savored for it’s smooth not overly sweet flavor. 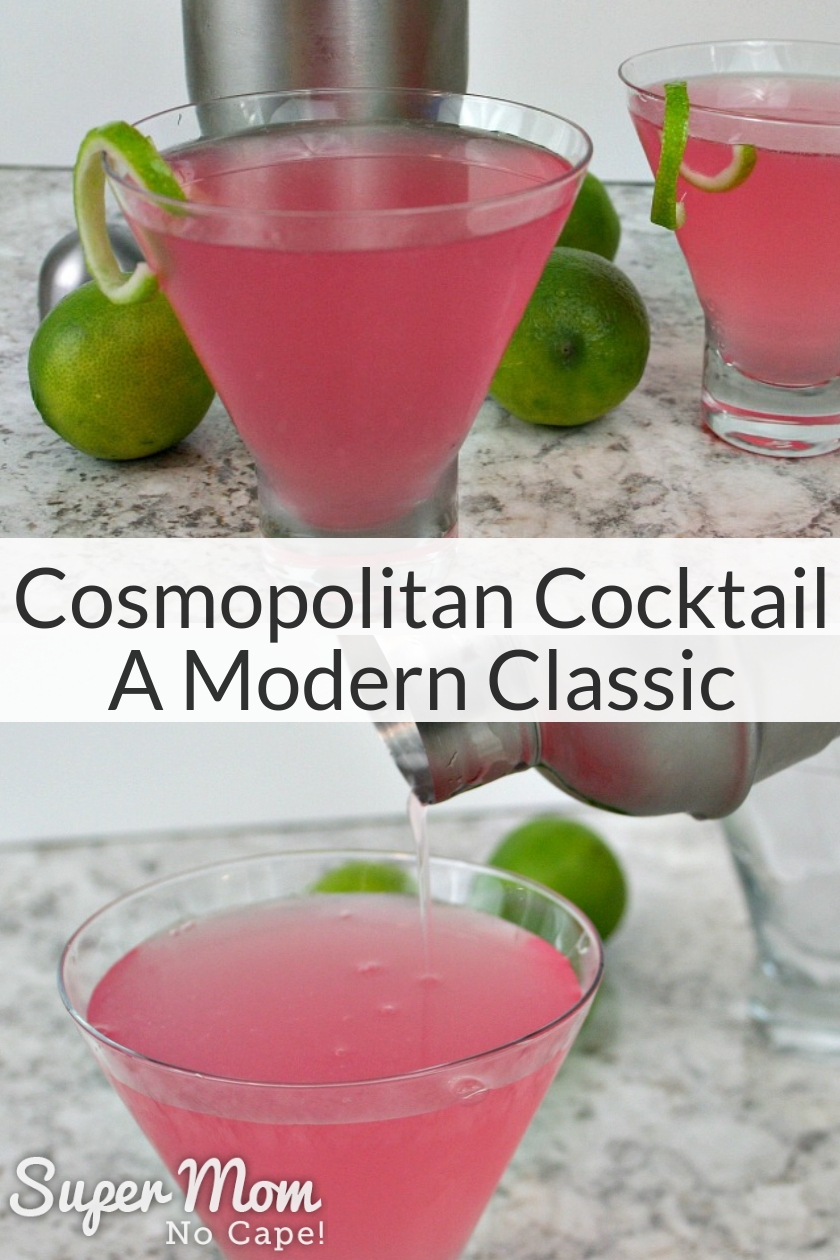 Please note: Nutrition information is calculated by an outside service. If you need accurate nutritional information, please take the time calculate it for yourself.

Super Mom - No Cape! is a participant in the Amazon Services LLC Associates Program, an affiliate advertising program designed to provide a means for sites to earn advertising fees by advertising and linking to Amazon.com
Terms and Conditions and User Agreement | Member License Agreement | Privacy Agreement
Super Mom No Cape! © 2008-2022. All rights reserved.
Skip to Recipe