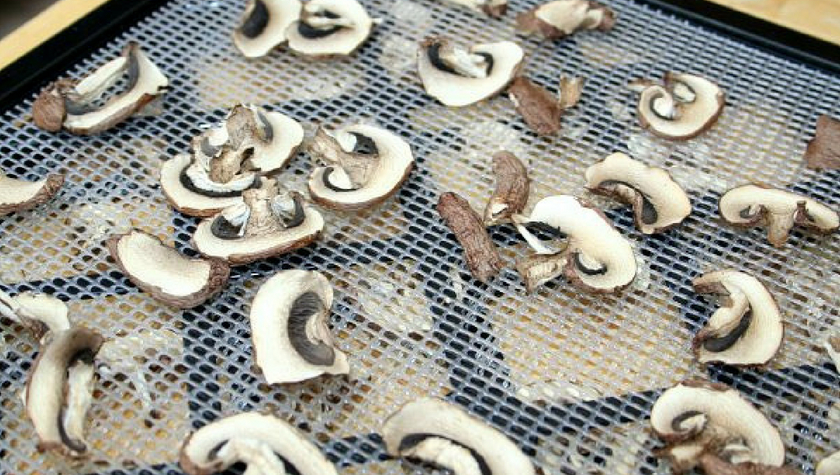 Dehydrating Mushrooms – Simple How To Instructions

Everyone in our family loves mushrooms. We love them raw as snacks. We love them sliced and fried in butter or mixed into stir fries. Fresh mushrooms are great to have on hand to add to all sorts of recipes.

But as our kids went off to university and college, we found that sometimes a package of mushrooms didn’t get eaten before they started to go bad.

That’s where having our Excalibur dehydrator

(<-affiliate link) comes in so handy.

Dehydrating mushrooms is so easy.

Dehydrating Mushroom – Simple How To Instructions

First wipe off any bits of dirt that may be on the mushroom.

Then slice each mushroom into 1/4” slices. Arrange slices on the dehydrator trays. 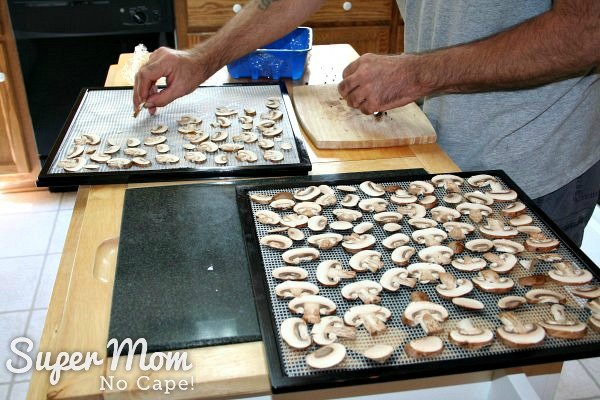 Put the trays in the dehydrator. 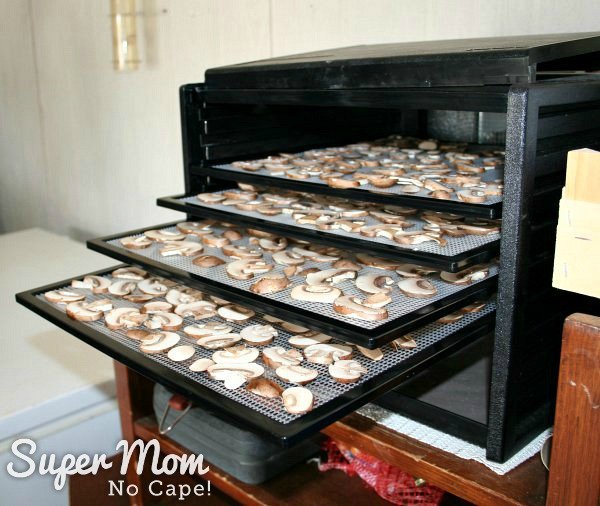 The water content of mushrooms varies so you’ll want to check the mushrooms after 10 hours to see how far along in the drying process they’ve gotten to.  Most of the books I have instruct to dehydrate until they are tough and leathery.

With the humidity we have in the South, I like to dry our mushrooms until they break when tested. Our last batch took about 20 hours to get to the point.

When they came out of the dehydrator they looked like this: 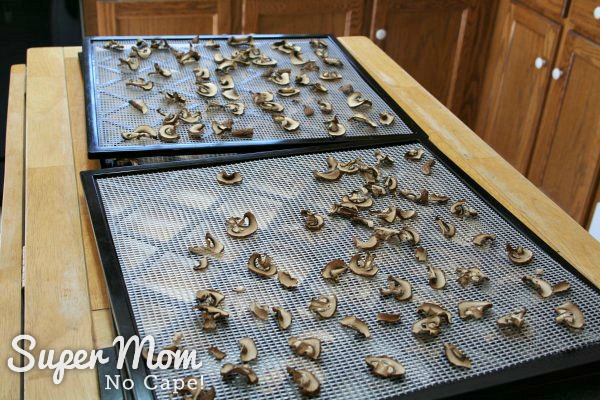 As you can see, they shrink quite a lot! 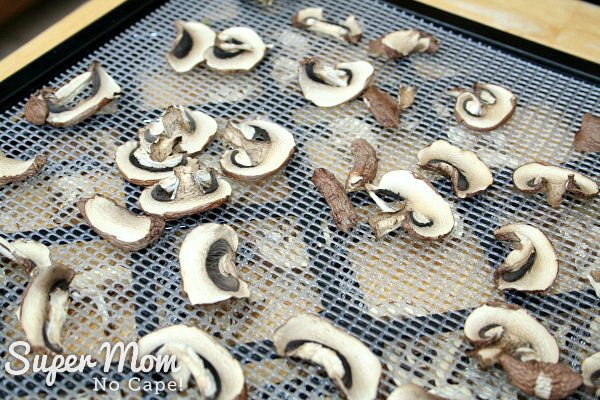 Those four trays of dehydrated mushroom fit into a one quart canning jar; with a few missing that got snacked on.

Seriously, I could eat these by the handful. They are that good. 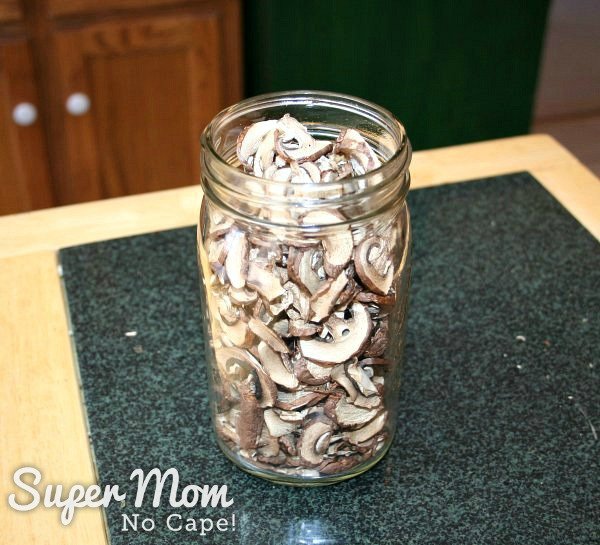 Add the lid to the jar and store them in a cool, dark cupboard until needed for a recipe. 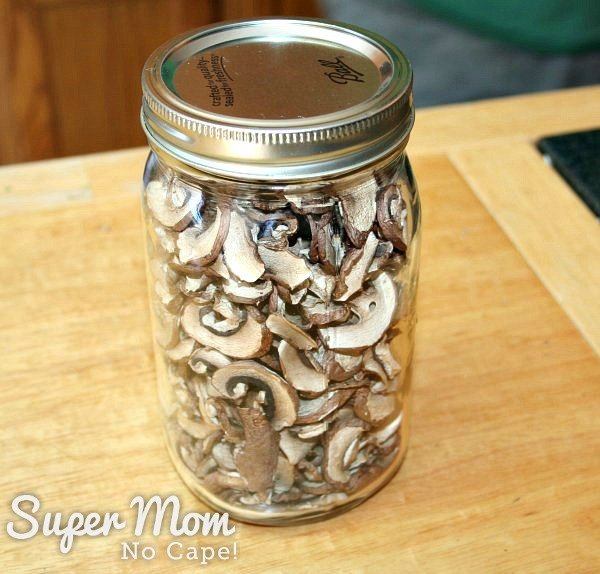 We add dried mushrooms to homemade pizzas.  No need to even re-hydrate them, just scatter them over the top of the pizza before adding the cheese.

When making Salisbury Steak, I used to use a can of mushroom soup to make the gravy.  Not anymore!

Re-hydrate a couple of handfuls of dried mushrooms in a bowl with boiling water about an hour before you want to make supper.

It tastes so good you’ll never go back to using canned mushroom soup again. And as an added bonus, you won’t have to worry about consuming the MSG, not to mention other unpronounceable ingredients, that are added to commercially canned mushroom soup.

I also used re-hydrated mushrooms when I was making the Beef Rouladen that was one of the recipes featured in German Cooking week here on Super Mom – No Cape! It’s one of the many recipes I learned to cook while Dave and I were posted to Germany from 1984 to 88 and which became a family favorite.

In fact, we use dehydrated mushrooms in so many recipes that we now look for packages of mushrooms on the discounted veggie stands at the grocery store in order to dehydrate enough to always have them on hand.

Then after you’ve mastered dehydrating mushrooms, you might also like to try dehydrating pears and apples as well.

Be sure to save the Dehydrating Mushrooms – Simple How-To Instructions for future reference by clicking on the Pinterest button underneath this post. 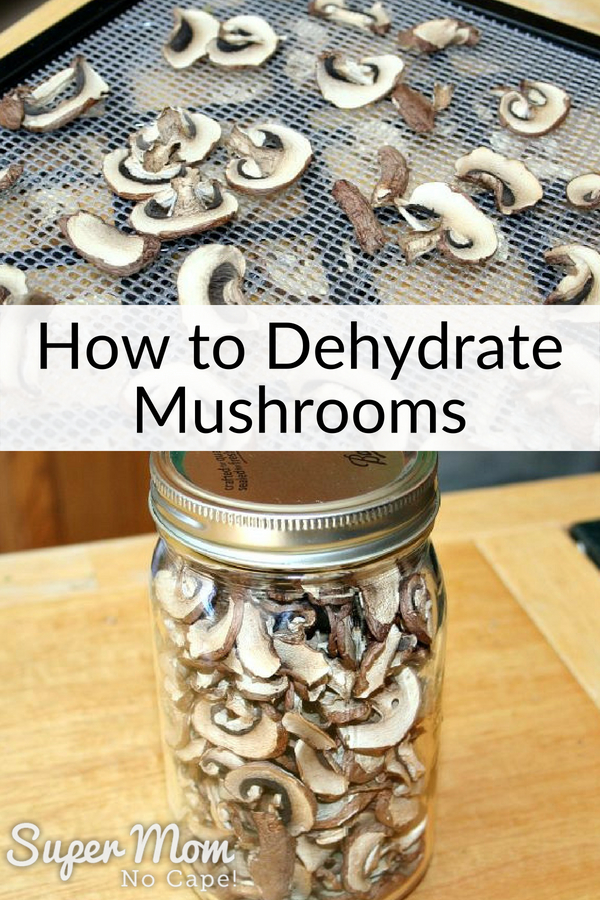