When we were posted to Germany, we always looked forward to October because that meant Oktoberfests which almost by definition means good food, good beer and good cheer.

Dave is the beer drinker in our family, but there was one little gausthaus called The Adler Klaus in Lahr that served the only kind of beer that I’ve ever actually liked.  Dave would order eine grosses bier for himself and ein kleine bier for me.

In honour of our time in Germany those many years ago and the many Oktoberfests that will be held in Germany and around the world, I’ve decided to have a German Cooking Week.

There are probably as many recipes for Beef Rouladen as there are kitchens in Germany.   My recipe is a combination of different recipes I’ve adapted for our family from the German cook books I brought back with me when we were posted back to Canada.

To serve 4 people you will need:

Approximately 2 lb of beef thinly sliced (you can ask the butcher to do this or slice them yourself, which is what we did)

Several mushrooms sliced (or rehydrate dry mushrooms, like we did)

To start… if you are using dried mushrooms… in a small pot, bring beef broth to a boil, turn off heat and add about a cup of dried mushrooms.  Allow to soak while you get the meat ready. 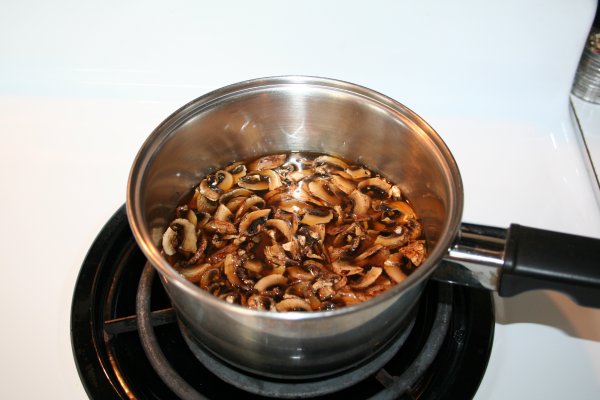 Round steak was on for a good price at our local IGA, so we picked up a 2 lb package. 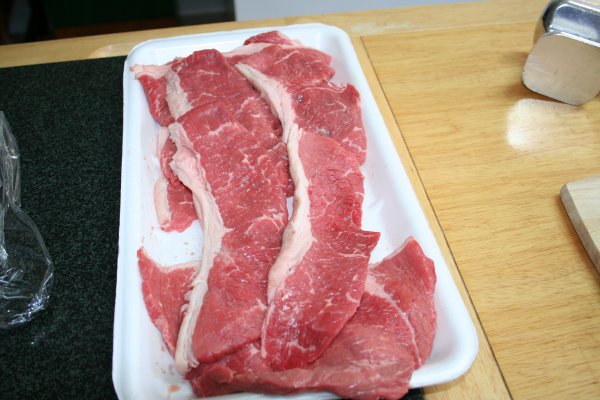 And then Dave sliced the steak in half to take them from about ½” thickness to ¼” thickness. 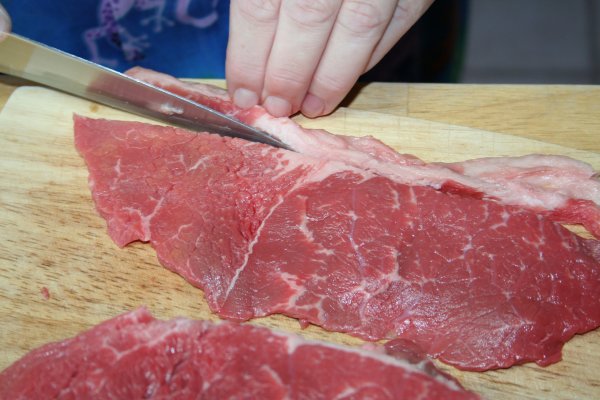 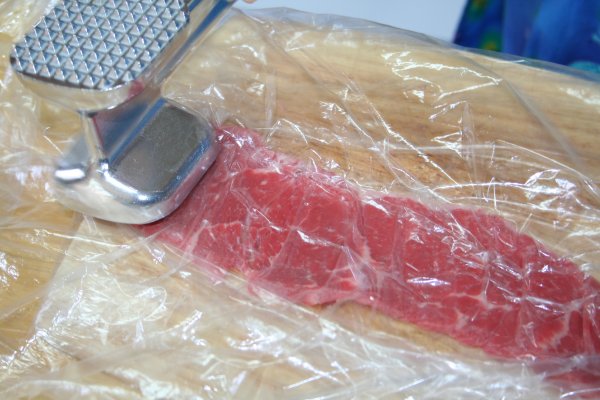 The slices of beef need to be about 1/8 of an inch thick, so I pounded them with the smooth side of a meat tenderizer

until they are about that thickness. (<-affiliate link)

Fry ½ lb of chopped bacon until soft and the fatty bits are cooked, but not until crisp. 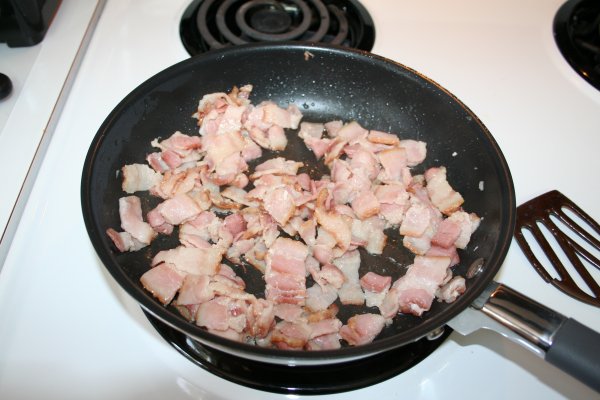 Remove bacon and put it in a bowl.  Drain excess fat from the pan.

Chop one large onion.  If using fresh mushrooms chop those now too. 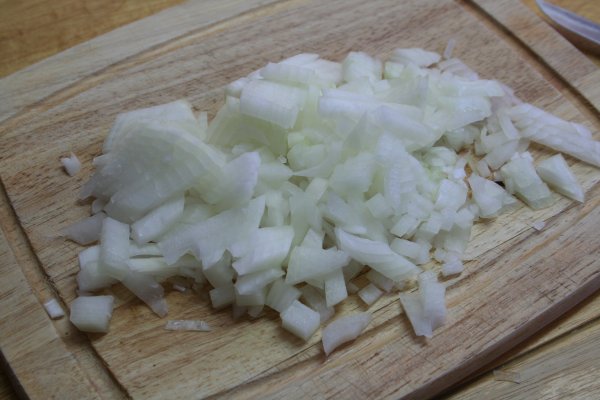 If using dried mushrooms… drain the now rehydrated mushrooms, reserving broth you soaked them in.

Sauté onions and mushrooms until onions are translucent.

Mix onions and mushrooms in the bowl with the cooked bacon. 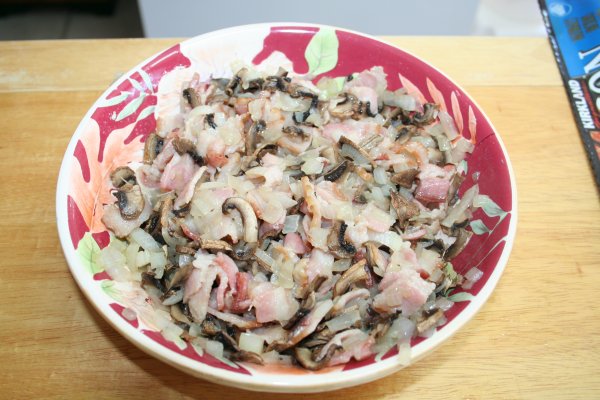 Spread your favourite mustard on each slice of beef.  (We used spicy brown mustard) 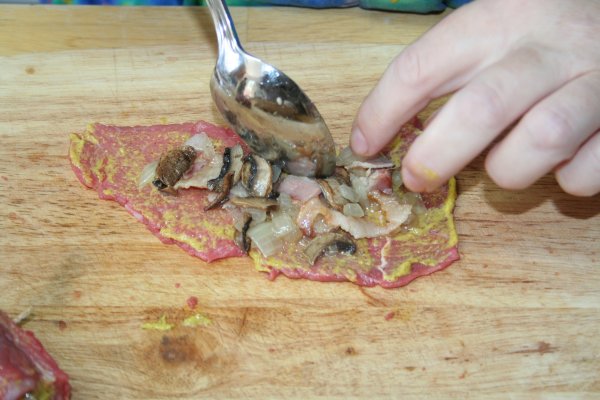 Roll up meat and secure with wooden toothpicks.

Place rolls in fry pan you used to fry bacon, onions and mushrooms. 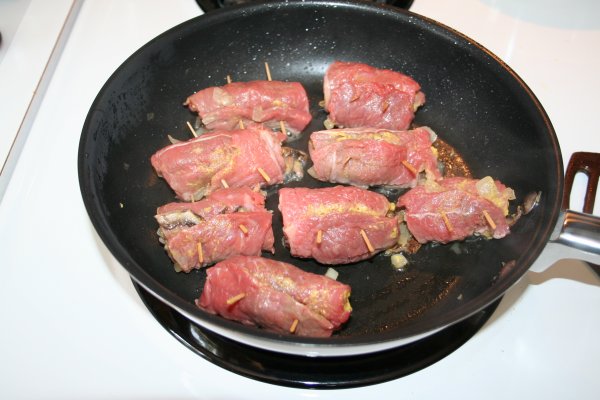 Sauté until browned on all sides.  Depending on the size of your rolls and the size of pan you may have to do this in several batches.

While meat is browning, peel and slice 5 or 6 large potatoes about 1/4” thick.  Layer in the bottom of your slow cooker.  You could also add other root vegetables as well… carrots, parsnips, turnips… whatever you have on hand. 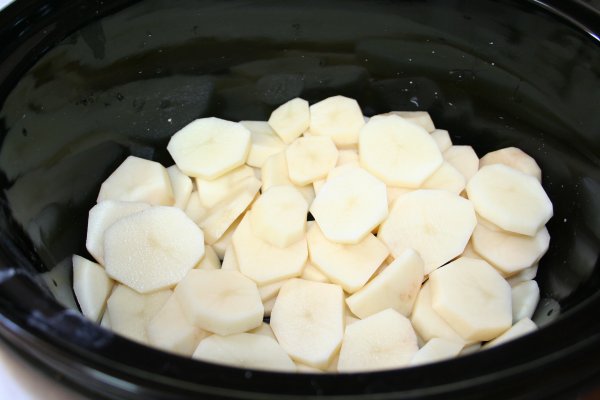 Don’t waste all that carmelized goodness from frying the meat. 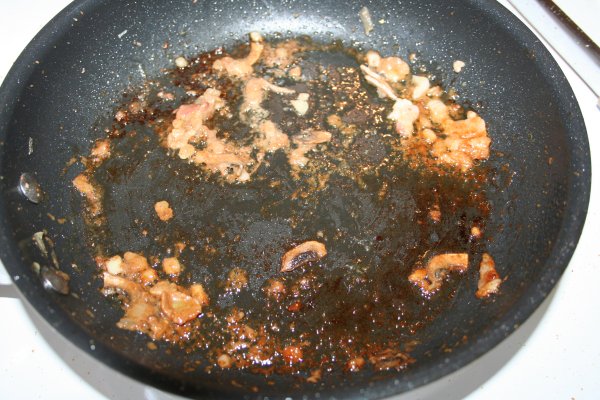 Deglaze the fry pan with the broth you reserved from rehydrating the mushrooms… or if you used fresh mushrooms with plain beef broth. Pour over the meat rolls and potatoes.

Remove the meat rolls from the slow cooker. Using a slotted spoon, scoop out the potatoes and place in a bowl.  Cover the meat and potatoes with foil to keep warm while you make the gravy.

Pour the liquid from the bottom of the slow cooker into a pan. Bring to a boil.  Mix about ¼ c of corn starch with ½ cup of water and pour into pan.  Cook until gravy is thickened.

Now that there’s just Dave and I for most meals, I could have made this recipe with just one pound of beef and a couple of potatoes.  Instead I made it pretty much like I would have when all our kids were home and it became what I called planned leftovers as we had enough left to make up a freezer meal for a night when neither of us feels like cooking. Personally, I prefer pyrex containers