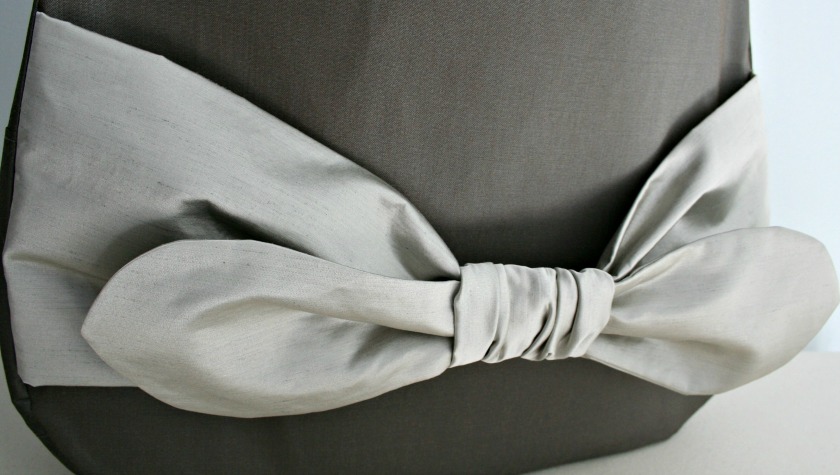 Do you have a favorite purse that you love so much you’ve used it until it looks like it’s gone through the wringer a few too many times?

That’s what DD2 has done with both of the Elegant Bow Purses that I’ve made for her.

The first purse I made back in 2012 as a thank you for allowing us to stay with her in her tiny apartment while we were waiting for Dave’s spring work contract to start. She gave up her bed for us and slept on her couch.

And while we took over the cooking, grocery shopping and laundry during our stay with her, I wanted her to have a more concrete expression of how much we appreciated her opening her home to us. So I surprised her with her own custom designed purse.

After using it for over three years, that purse was ready to be replaced.

For the second Elegant Bow purse, she asked for some design changes. She found that she didn’t use the large zippered pocket I’d sewn into the first one, but wanted to keep both divided side pockets and the small inset zippered pocket in the lining. She also requested a one piece carrying strap instead the two that were on the original.

When it came time for this most recent replacement, she wanted one exactly like it.

Fortunately, there was just enough of both the outside and lining fabric left to meet her request.

However, the silver Dupioni silk that she’d bought for the bow on purse number 2 did not wear at all well. 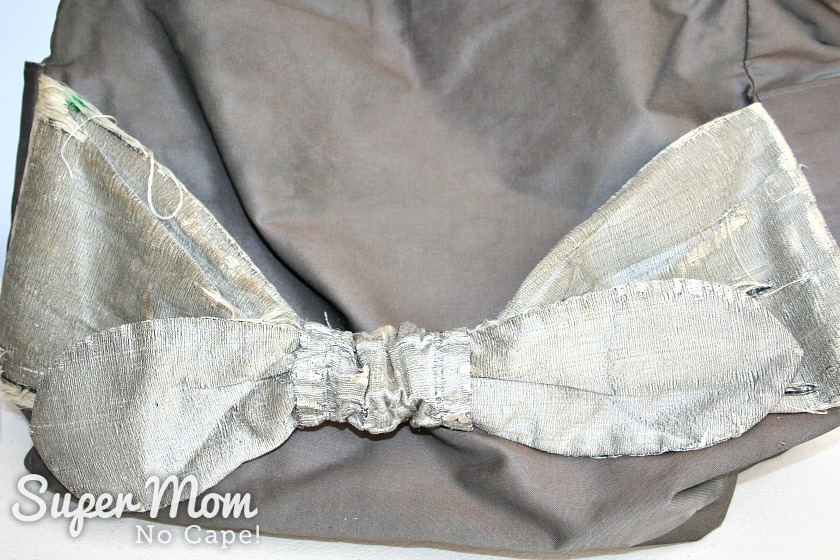 In fact, it had gotten so shabby looking that I must confess that I confiscated her purse and wouldn’t let her have it back until I had time to make her a new one. (She had a purchased one she keeps in reserve to use in the meantime.)

To make the bow on number 3, I went back to using a drapery weight fabric like I’d used on the first one.

With that introduction, let’s get to the photo sharing of the Elegant Bow Purse – Edition 3!

Photo taken from the front: 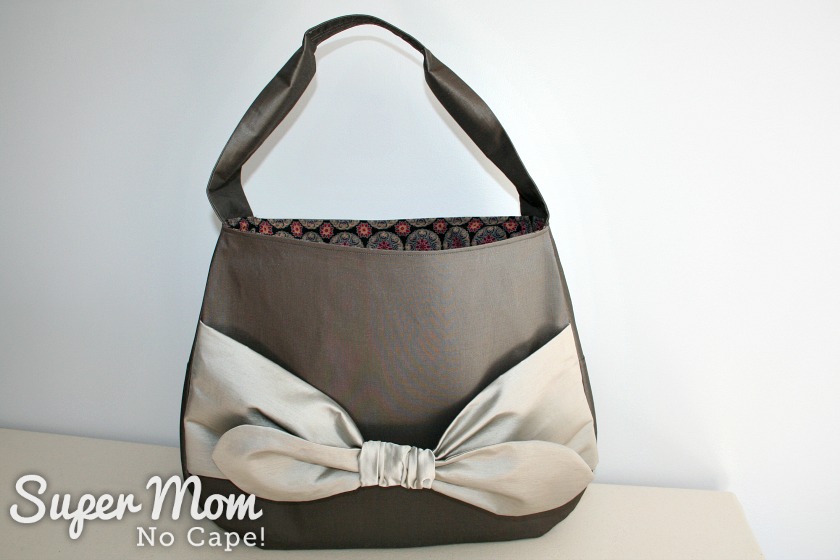 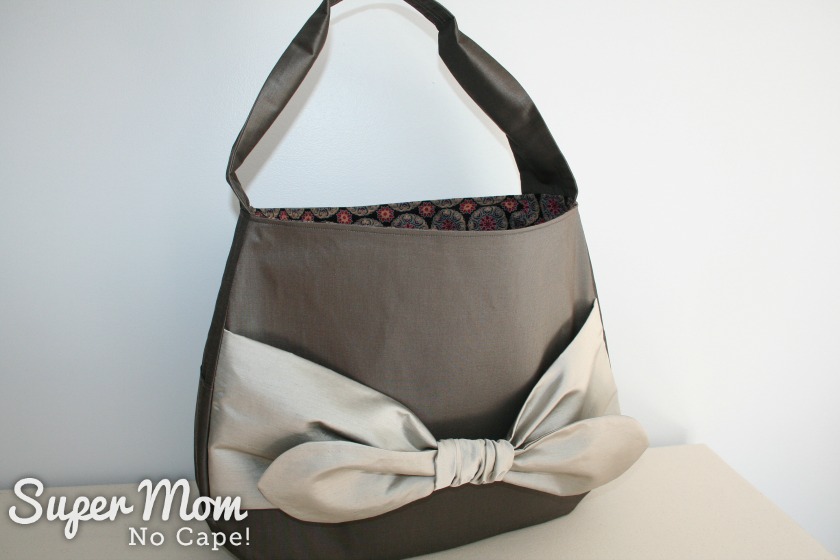 Partial side view of silver bow: 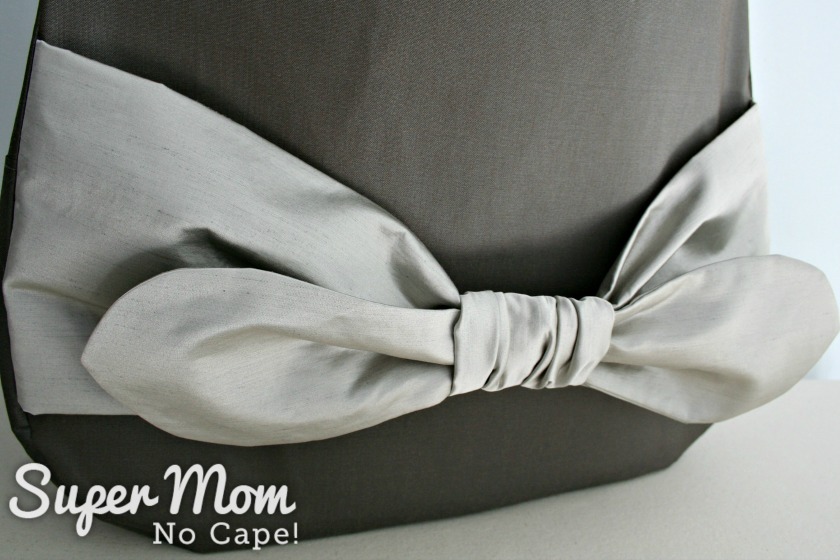 Close up of the bow taken from the front: 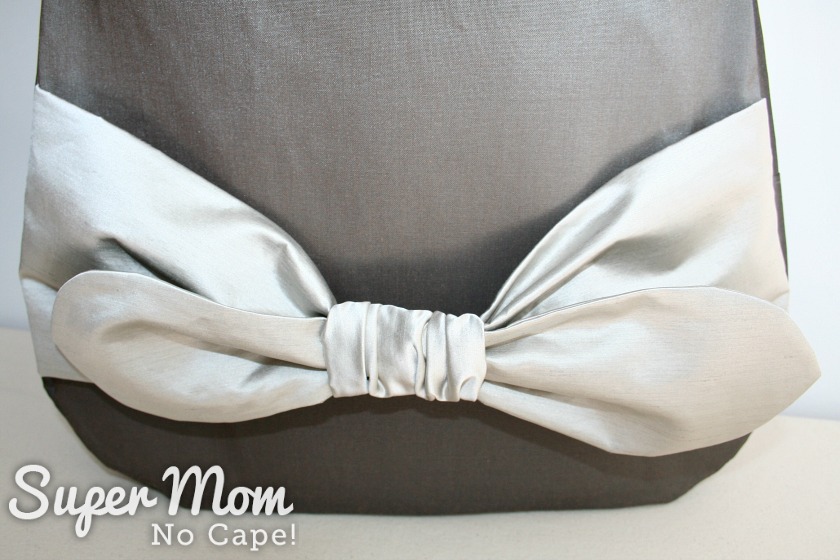 Floral medallion lining with inset zipper and if you look closely, one of the divided pockets: 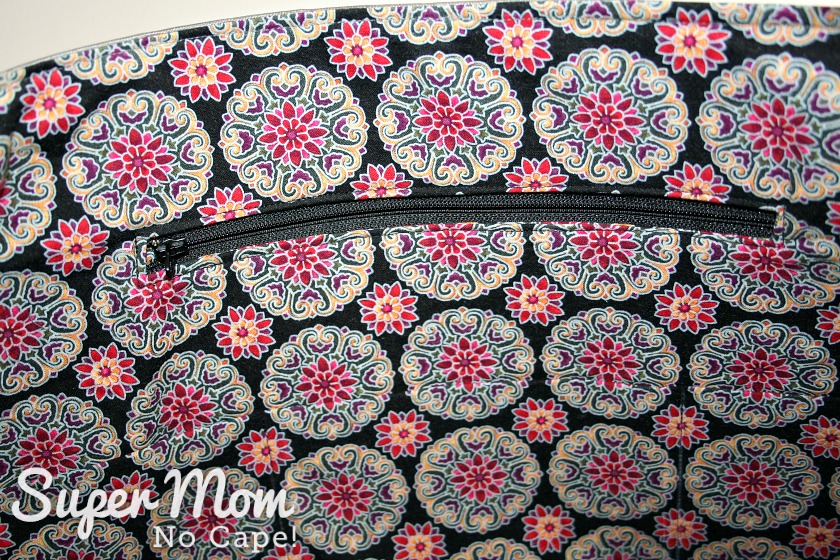 When I made the strap, I once again pleated 5 inches at the center to make a narrow portion that rests easy on the shoulder. 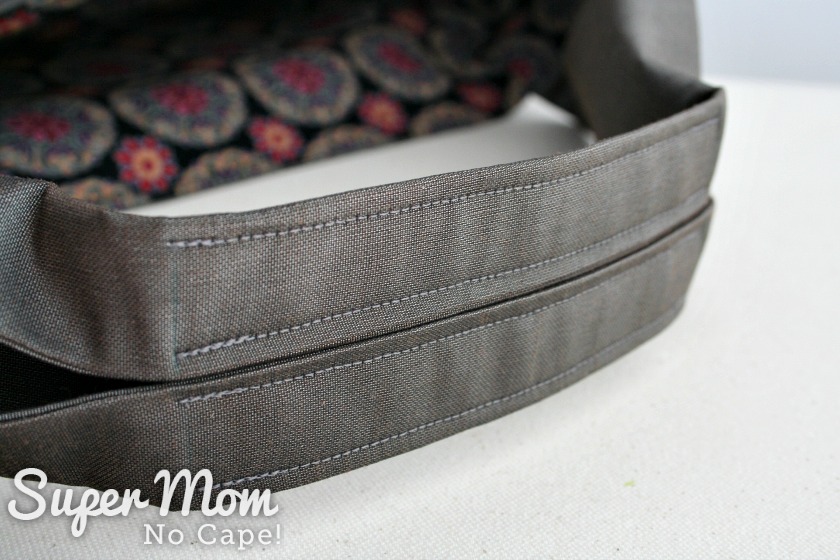 Here it is on the vintage occasional table I found earlier this summer waiting for her to come pick it up after work. 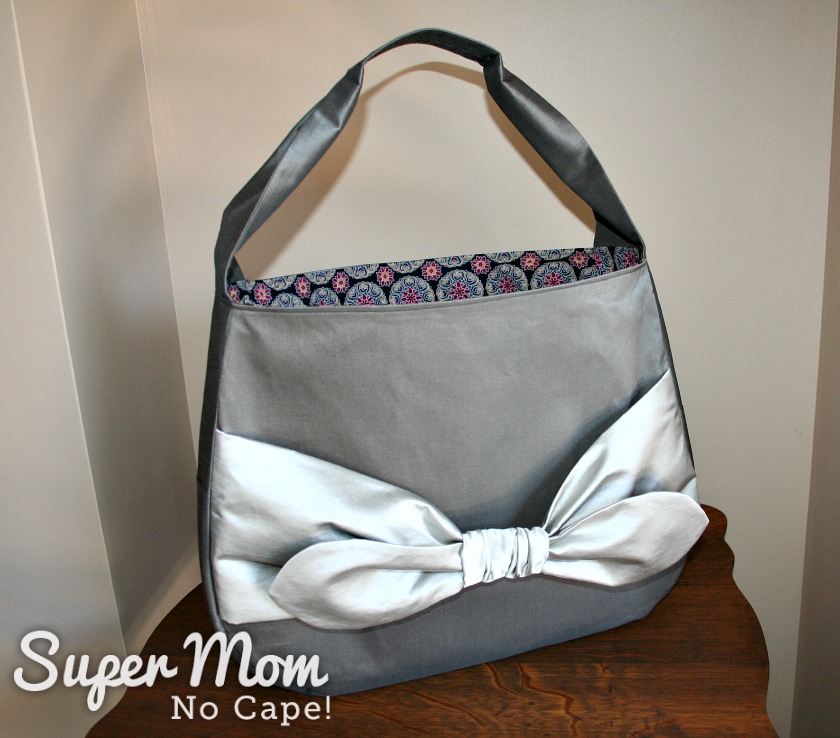 Now that you’ve seen the finished purse, I wanted to mention another change we made that can’t be seen.

that I had used as a stabilizer in the first two versions. She had some 809 on hand that she brought over for me to try.

I will say that the 809 is not as easy to work with and it took more fussing with to get it to fuse properly and stay fused to the outside fabric. It’s stiffer than the 808 which made turning the finished bag right side out more challenging.

When photos of the second version and the one using the 809 are compared side by side, it’s readily apparent that the 809 provides a much crisper finished item. 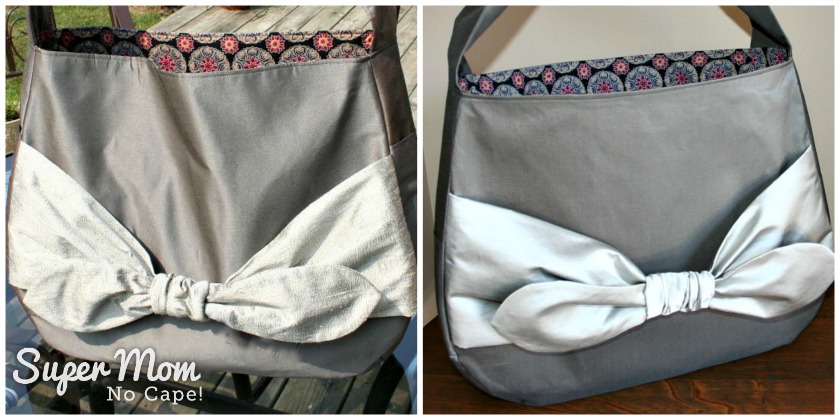 Time will tell if it continues to look that crispness through daily use.

Note: The lining of the purse was interfaced with Pellon 911FF Featherweight interfacing

while Pellon 808 was used for the bow.

DD2 had missed having her favorite purse so much that the first thing she did when she arrived after work was switch everything from the purse she has been using to the new one.

She even agreed to model it! Now that I’ve made three of these purses, I plan to write the complete step-by-step instructions and convert the pattern pieces into PDF format.

Some time this winter, I’ll be looking for pattern testers with a goal to release the pattern in the spring. If you would like to be considered to test the Elegant Bow Purse Pattern, please feel free to let me know in the comments or send me an email by clicking on the envelop in my blog header.

Pin the Elegant Bow Purse for future reference by clicking on the Pinterest button under this post. 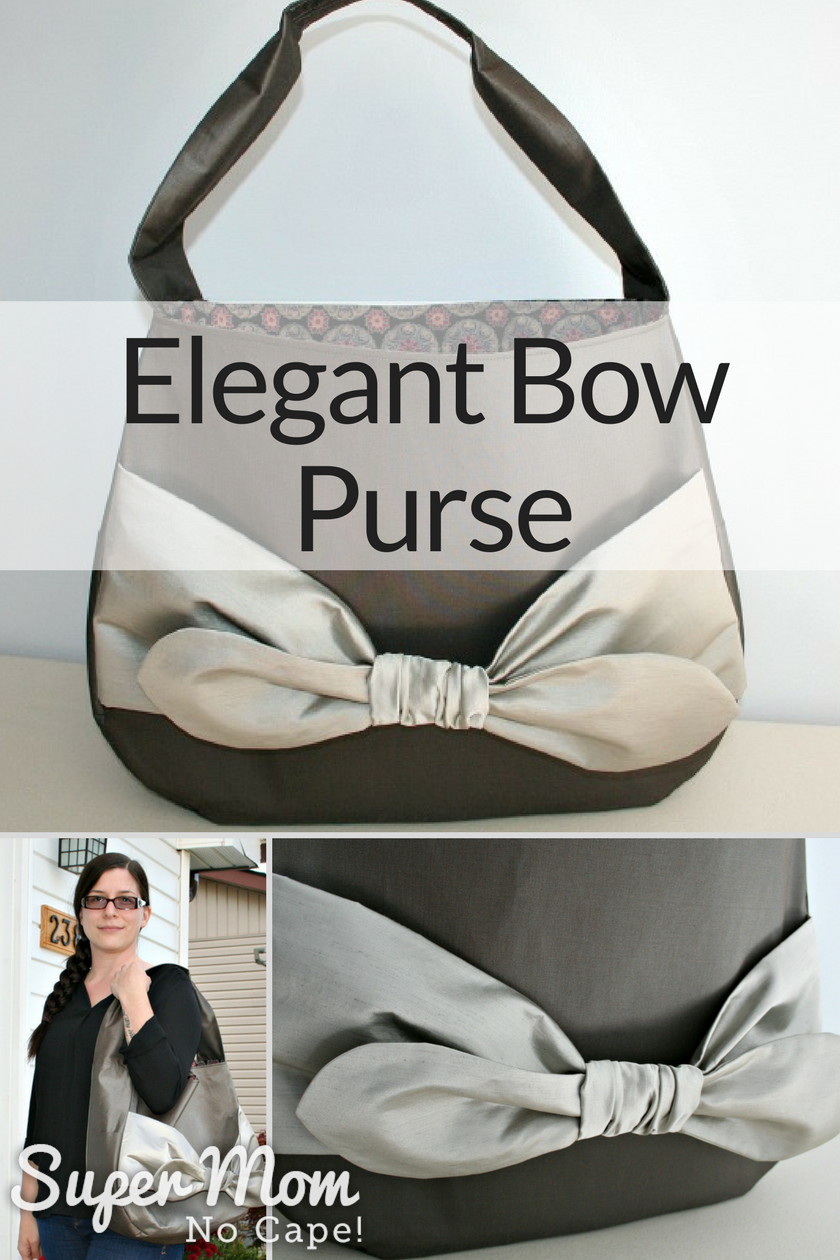