After we arrived back in Ontario and until Dave’s contract started in western Ontario, we stayed with our daughter in Toronto.  One thing I didn’t mention in that post is that our daughter lives in a tiny one bedroom apartment in a walk-up on the third floor.  She gave up her bed and bedroom and slept on her couch so that Dave and I could have somewhere comfortable to sleep as well as some sense of privacy.

At first, we worried that three people living in that little apartment would soon begin to drive each other crazy, but we did surprisingly well.

Our middle daughter moved back to Canada in 2005 to attend university and then after she graduated she remained in Toronto.  That month of living with her gave Dave and I a chance to get to know her as an adult in a way that her brief visits home for Christmas and our brief trips back to Canada hadn’t allowed.

Dave and I took over the cooking, cleaning, laundry and shopping for groceries in an attempt to make up for turning her life upside down for those weeks.  Now she, of course, claims that we did no such thing but I’m still not completely convinced.

While there, I noticed that the purse she took to work each day was looking a little worse for wear.  She had mentioned that she had found the perfect replacement for it, but was waiting for it to come on sale before buying it.

I decided that as a thank you for all she had done for us, I would make her a new purse.  So during the day while she was at work and making sure to put away all evidence of my surprize before she got home… for three days I worked on making her a new purse to use until the one she wants comes on sale.

I used this tote bag as the starting point for my inspiration.

I did however, make quite a few changes.   Our middle daughter likes her purses big enough to carry work home when necessary without having to carry a separate brief case or bag.  So for the version I made for her, the shape remained the same as the inspiration tote but was an additional 5 inches wider and 3 inches taller to approximate the size of her old purse.

The next change I made was in the type of fabric used.  The inspiration tote is made from several prints of quilting weight cottons but I wanted something a bit heavier that would look elegant and professional enough for our young, up and coming junior financial analyst.   After much searching, I found these two drapery weight fabrics.

To help her organize all the things she needs to carry with her to work each day, I added several pockets to the inside; one long zippered pocket along one side of the inside of the purse which was sewn in such a way to provide three pockets behind the zippered one. 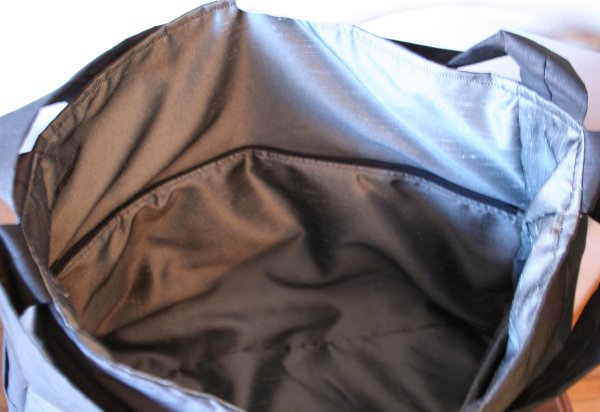 And three more pockets on the other side plus a second small zippered pocket that I used this tutorial to insert. 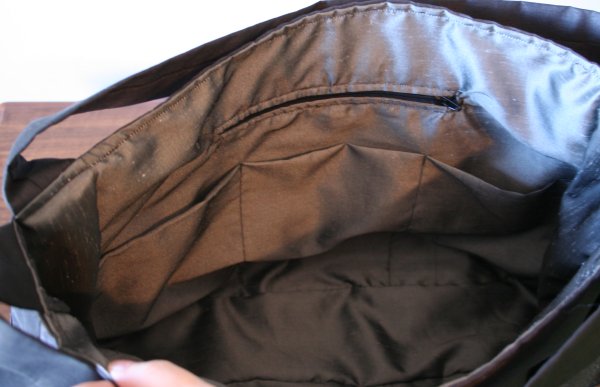 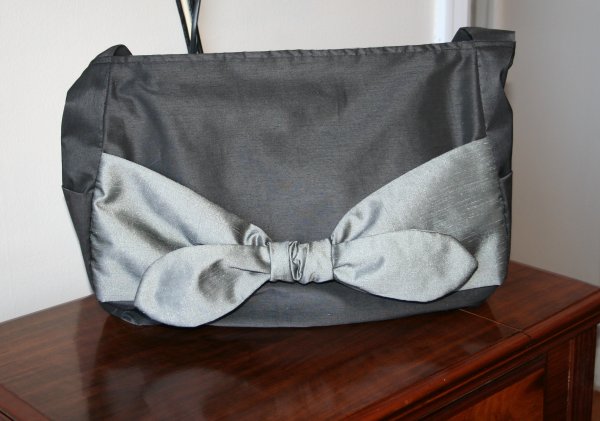 Here it is from another angle. 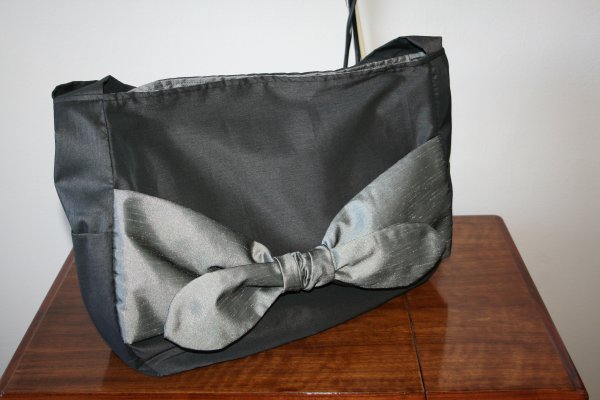