I don’t know if you noticed but a while ago I added a new page to my blog called 2011 – The Year of Getting Things Done.  See it up there between the “Home” and “About” tabs?

On it I’ve listed all the projects that I’ve completed so far this year and projects that are in need of completion.  As I complete a step on a specific project, I cross it off and add what needs to be done next.

Last week, I was feeling frustrated that even though I’ve been working away on various projects, I haven’t been able to add anything to the Projects Completed So Far list since I created the page.

So starting last Monday, I chose the first project on the Unfinished Projects list and decided to work until it was done.

Friday, I finished sewing the last of the QAYG (Quilt As You Go) blocks.   Saturday, I trimmed them down and squared them up to 10.5”.  Then I cut the strips for the binding. 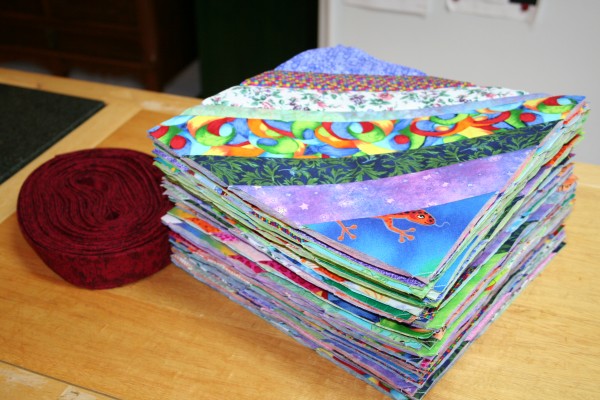 In addition on Saturday, I was able to cross one more step off a project further down the list.  When I first started quilting, I made 8 paper pinwheel quilt blocks as practice in making and working with half-square triangles and piecing blocks (I still need practice.)  I didn’t have enough of the background fabric to make any more blocks, so they have just been sitting in a drawer ever since.

I had kinda sorta formed a plan to make a large appliquéd center block and then surround it with the pinwheel blocks but until recently I’d never even attempted appliqué.   Needless to say, that part of the project didn’t get done.

Then Saturday afternoon, I decided “kinda sorta” plans weren’t in keeping with my decision to make 2011 the year of getting things done and instead of trying to figure out an appliqué block for the center of a quilt to go with those paper pinwheels, I’d divide them up to make two table toppers.  5 of the paper pinwheels and 4 blocks of the main fabric were used in one.   I had enough scraps of the main fabric and background fabric to make sashing and borders around the remaining three pinwheel blocks to make a second table topper.

The first part of Sunday afternoon was spent sewing them together. 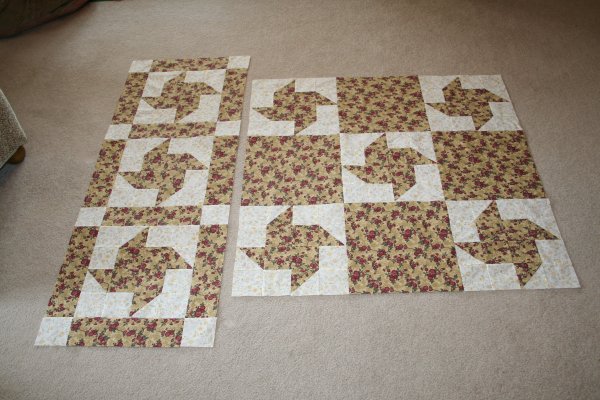 Then the rest of the afternoon was taken up with sewing and pressing the roll of binding strips pictured with the QAYG blocks.  The blocks and binding will be mailed off to Jan Mac over at Oz Comfort Quilts in Australia today.

And then I’ll be able to move that project up to the Projects Completed list.