Many years ago when we were posted to CFB Suffield in Southern Alberta, to earn extra money to help pay for Christmas each year, I sold my handmade crafts at farmers’ markets and craft fairs throughout the year.

One of my most popular items was stuffed Christmas elves.  I would sell out of them almost every week and have to scramble to make more before the next sale.  I can remember one week in which I had so many orders for them that I had to enlist Dave’s help because I needed 20 of them by Thursday.

Well the last year we were in Suffield, I had two that didn’t sell in the final pre-Christmas craft fair, so we added them to our Christmas decorations.

Now I don’t know about the other elves I sold, but those elves that we kept turned out to be magic elves.  You see, when our kids went to bed each night during the month of December the elves would be in one spot, but somehow, the next morning when they came downstairs, the elves would be in a completely different spot.

Over the years, those elves would be one of the first of the decorations to be set out and one of the last to be put away.

Once our children grew up, I had always planned to make them each a set of their own Christmas elves.  But when I went looking for the type of buttons that I’d used for the noses, I discovered that those buttons were almost impossible to find.  The original buttons had been in a large bag of buttons I’d purchased at a flea market.  I had no idea they were anything special.  But I came to discover that they were, in fact, bakelite buttons.   Finally, this past winter, I came across a seller on e-bay with an auction for cherry red bakelite buttons for sale.  I used the buy-it-now feature to make sure to get them.

Once they arrived, I got busy sewing their bodies.  And once again, I enlisted Dave’s help to help stuff them and cut out and glue on their faces.

Here’s a picture of the finished elves (except for the bells on their toes) with one of the original elves in the middle. (Unfortunately the other original was lost when our basement flooded back in the 90s.) 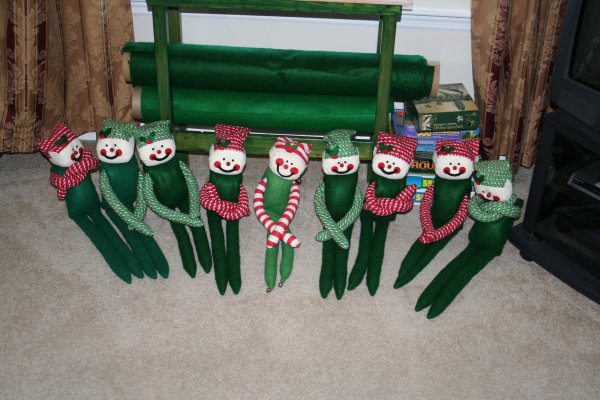 We ended up making eight elves, two for each of our children and two to keep our original elf company. 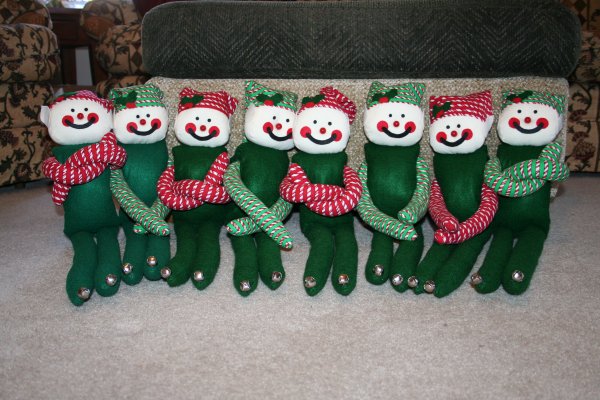 We’ll have to wait to see if the new elves are as magic as he is.