How to Save Money When Buying Meat

Food Lion has London Broil on sale this week for $1.88 per pound so I thought I’d share with all of you how we save money on a variety of different cuts of meat by cutting and wrapping our own.

The last time London Broil was on sale we bought nine roasts over the course of three shopping trips.  The roasts from the first two trips were cut up as follows:

Some were divided into steaks.

Some was sliced into stew meat.

First the meat was cut into strips approximately 1 inch thick (as pictured below):

Then the strips were cut into cubes.

These were then weighed, wrapped in freezer paper and labeled.

The rest was sliced thinly for stir fry. 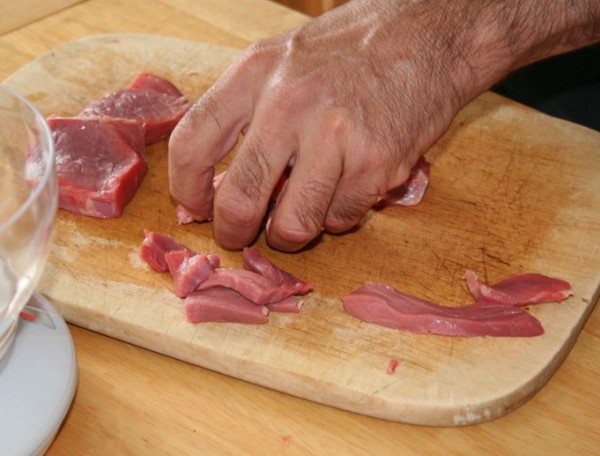 On the third trip, I asked the butcher if he would be willing to grind the roasts for me.  He kindly agreed and packaged it into two family size containers.  There was no charge for this.

When I got home, all I had to do was weigh out 1.5 lbs per package and wrap and label it.

From that last sale we ended up with 4 packages of  stewing meat, 8 packages of stir fry and 4 package of steaks and with a little help from the Food Lion butcher; 6 packages of very lean ground beef, plus 6 hamburger patties for that night’s meal.

For comparison, I checked the prices to buy these pre-cut and packaged from the meat department.  Stewing beef and stir fry beef were priced at $3.49/lb.  Ground beef was priced $2.99/lb and upwards, none of which was as lean as the ground london broil.  And as far as the steaks go, depending on cut; $5.49/lb and up.  London broil when it’s not on sale goes for $7.99/lb.

The following week, when sirloin roasts were on sale, we bought three of those and sliced them into steaks and smaller roasts.   This can easily be done with various cuts of pork as well.

To get started you’ll need are a good sharp knife, a cutting board

, tape and a marker. (<-affiliate links)

By shopping the sales and doing your own cutting and wrapping you’ll be able to save anywhere between 40% to 50% (or more) on meat.