My Day of the Tree Bird Blog Hop

I came by my love of birds in quite a bit different way than I would say most people do. You see, when I was growing up my Dad raised exotic birds. At various times we had Golden Pheasants, Ring Neck Pheasants, Peacocks, Egyptian Geese and Bobwhite Quail… just to name a few. Here are a couple of photos that I dug out of my photo album from the 70s. 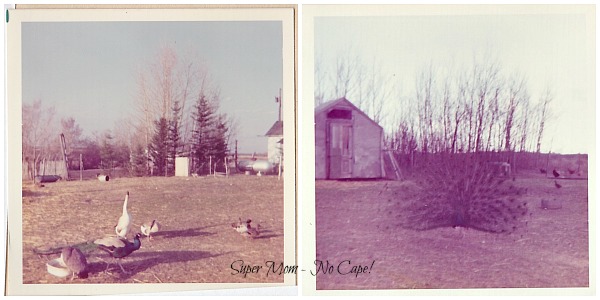 Now I won’t pretend that I always loved birds when I was living at home. I hated the cockatiels and their cages that lined one wall of the living room. They made lots of noise and every time someone walked by the cages, the cockatiels would fly around sending feathers and dust everywhere! Cleaning the bird cages was not a chore I liked one bit either. I vowed then that I would never have birds in cages in my house.

But my Dad loved his birds. And we had lots of outdoor adventures looking for wild ones.  The hawk that he’s holding in the photo below is one example. 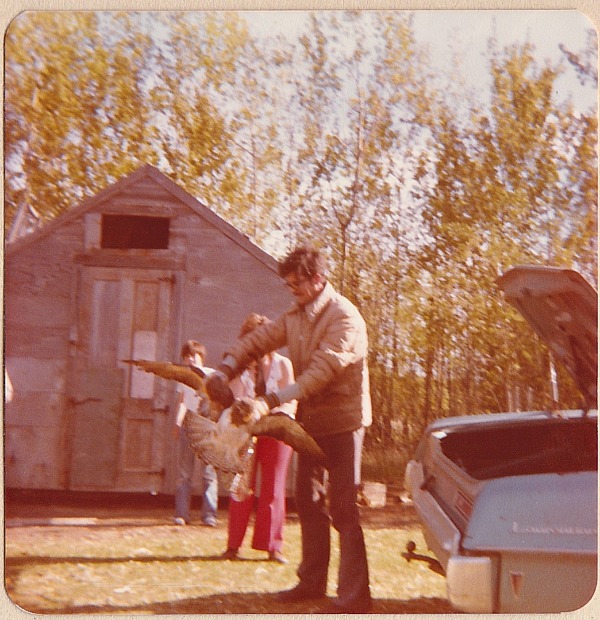 One day we came across two hawks on the ground, locked in battle. Hawks will fight to the death and one of them was very near exhaustion and would have been killed if something wasn’t done.  Dad picked them up, still locked together and put them in the trunk of the car. In the dark trunk on the way home the birds either relaxed enough to let go of each other or perhaps they were more scared of us than they were angry at each other so when Dad opened the trunk, one of them flew out. The other was too tired to fly away, so wearing leather gloves, Dad removed him from the trunk and put him in the chicken coop (the coop was empty at the time.) After a few hours, the hawk recovered and Dad released him back to the wild.

I don’t share that same passion for birds that my father had but since leaving home I’ve always put up bird feeders wherever we lived if it was at all possible.

Long time readers may remember the fabric bird panels that I spent several months embellishing with embroidery, quilting and beads before turning them into these scrapbook/journal covers. 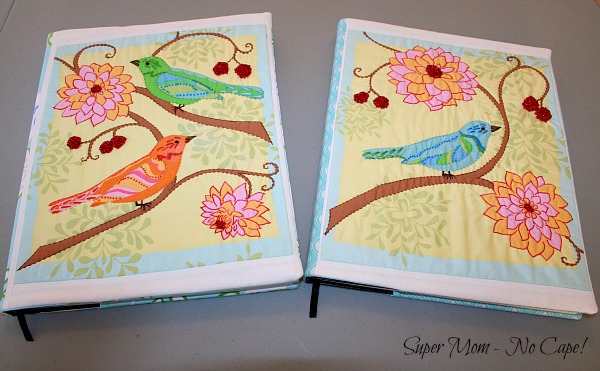 And of course, last fall I made an entire travel accessory set out of beautiful bird fabric called Postcard Garden by Michelle Palmer for Red Rooster Fabrics.

Please note: this fabric is no longer available for sale anywhere that I’ve been able to find. 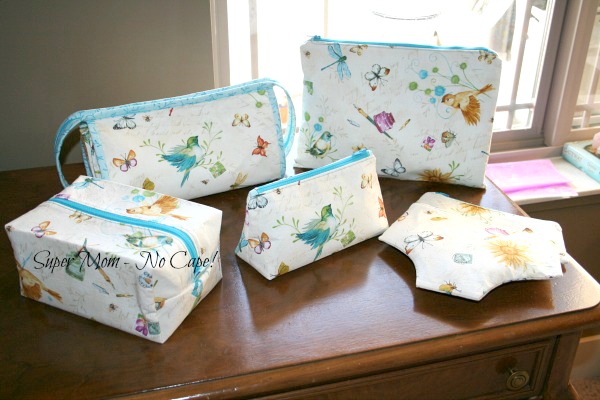 So needless to say, when Madame Samm announced the Tree Bird Blog Hop with Lana as cheerleader, I was happy to sign up to create something with a bird theme and now it’s finally time to reveal what I’ve been working on.

I had these two little redwork birds already embroidered. They just needed to be turned into Christmas ornaments. 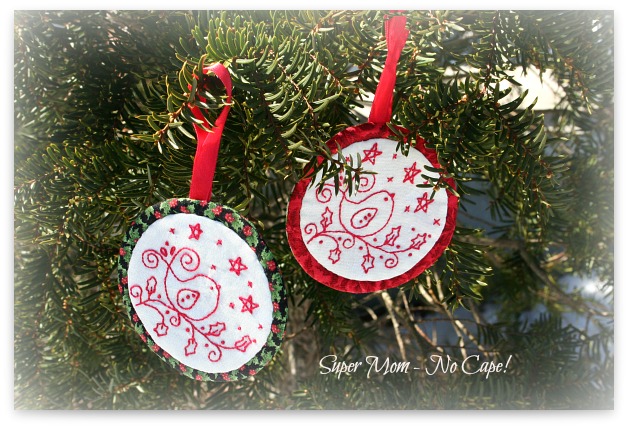 The pattern is one that Gail Pan designed for the Aurifil Holiday Blog Hop 2012.

Those two embroideries were listed in my 2015 Finish Along Q1 Goals, so it was great to check them off that list in the process of getting ready for this blog hop. I won’t say I “killed two birds with one stone” because… well that would just be so wrong!

The ornaments didn’t take long to complete but the next project is the one I’ve been hinting about for weeks now. I couldn’t find the inspiration fabric that so many of the other ladies in the hop have been showcasing but I had a few bird fabrics in my stash to choose from: 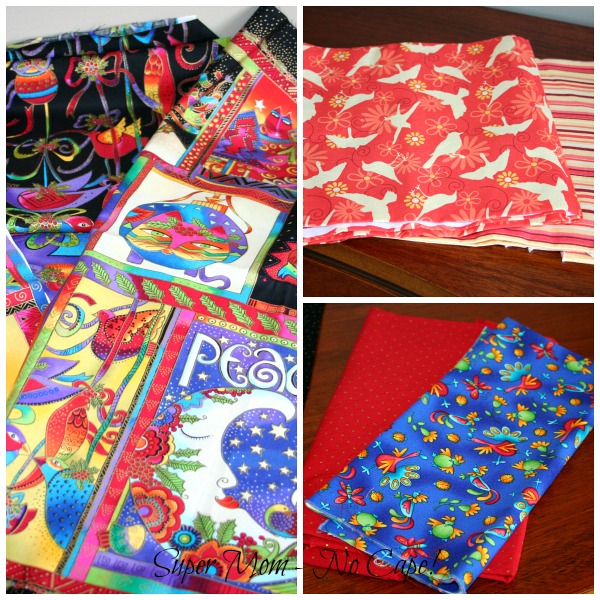 Of those, I chose the gorgeous Laurel Burch Holiday Celebrations for Clothworks panel and matching bird/ornament fabric that is pictured on the left.

And just like the bird adventures we went on with my Dad, the making of this project has been its own adventure. I purchased these fabrics to go with the Laurel Burch fabric: 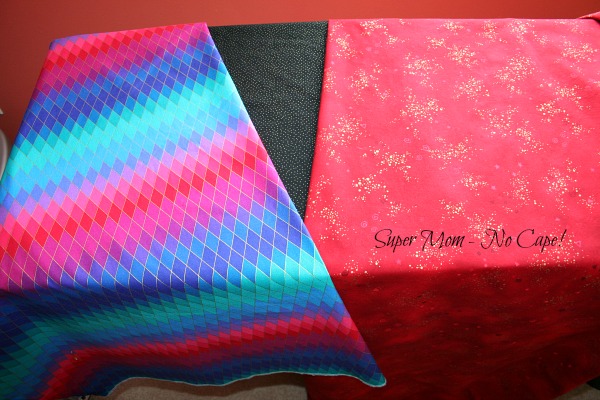 You might recall that I mentioned that I was only able to find 3 fat quarters of the Timeless Treasures Metallic Dot fabric and hoped that ¾ of a yard would be enough.

I had chosen twelve different designs from the panel to frame in the black dot fabric. I ran out of fabric with the top of the eleventh block and top and bottom of the twelfth block left to frame. All I needed was 9”X12” more!

I spent two days phoning every quilt shop within a reasonable driving distance (and some not so reasonable) to see if they had any… all to no avail. But then there was a glimmer of hope.

One lady I spoke to (~waving to Linda~) was sure she had some scraps of that fabric at home in her stash. She said she would call me after she’d had a chance to check. Sure enough the next morning she phoned and said she’d found a couple of pieces of black with gold dot fabric and I was welcome to have it if it was a match. We arranged to meet and when I saw it, I was so sure that it was the right one.  But unfortunately when I got it home, neither was at match.  The dots on one were too close together, the dots on the other were too far apart.  Even then I might have been able to make them work but the background black didn’t match.

But match or no match, it proved to me once again that quilters/crafters are the nicest people in the world!

Next, I bought and made a sample block using a black with gold “plaid.”  But when I laid the sample block out with the other blocks, it stuck out like a sore thumb.

My original plan had to change.  Out came new graph paper and a new plan was drawn up. 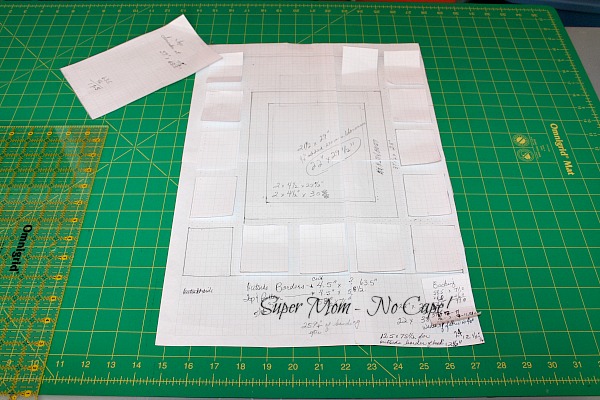 The two half finished blocks were some of the smaller blocks in the panel, so I unpicked them, sewed that black dot fabric together with the few scraps I had left of it and “made” enough fabric to frame two of the bigger blocks.

Then I took those two smaller blocks, cut two more to go with them and framed all four with a solid black from Clothworks that was a match for the black in the dot fabric and the black in the Holiday Celebrations panel and the bird/ornament fabric.

Finally I was ready to put my new plan in action and this is the result: 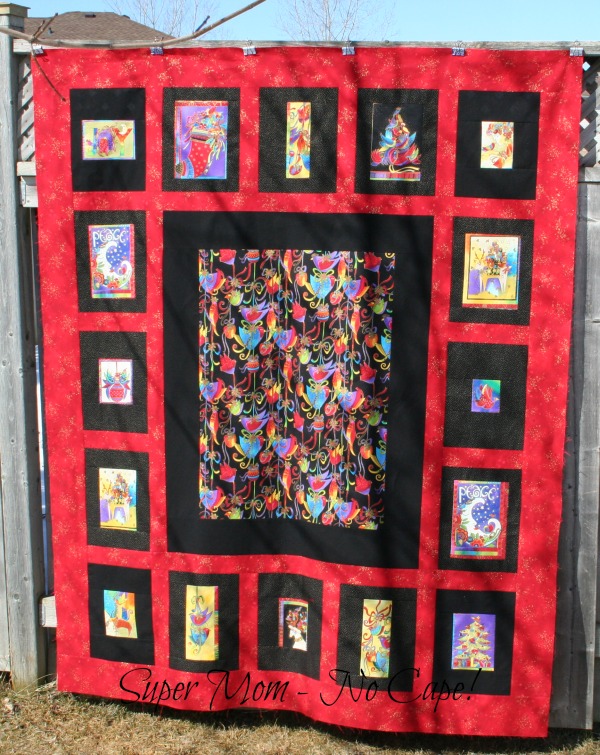 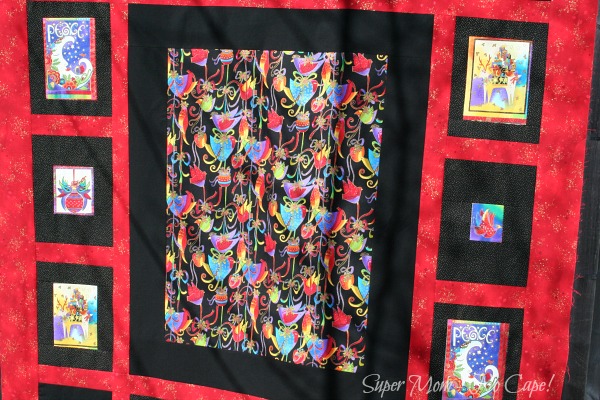 Now you would think that would be enough adventure for one quilt.  But if you scroll back to the photo of the fabric that I bought to go with the Laurel Burch, you’ll see on the left a beautiful harlequin fabric.  When it came time to cut it, I discovered that it was not printed straight on the fabric. The top of the fabric is where the lady at the quilt shop tore it when I bought it, so that is the straight cross-wise grain of the fabric.  The bottom shows where I cut the fabric lining up the ruler on the bottom of the harlequin diamonds.   At $16 per meter, I was not a happy camper!

I had been considering using it to add a second wider border to the quilt top but decided instead to use it on the back where the fact that it’s not perfectly straight wouldn’t be as noticeable. The center section is more of the Holiday Celebrations but in the purple colorway.  I’m hoping that the fact that the harlequin fabric couldn’t be cut on the straight of grain doesn’t create a problem when it comes time to quilt and that it doesn’t show too much after it’s all finished.

And speaking of finishes… why isn’t this?  Well… so much time has gone into it and despite all the little misadventures, I absolutely love the way the quilt top turned out that I want to take my time to finish it.  I have some ideas for how I want to quilt that center section of the top but I’ll need to do some more fmqing practice before I try those ideas on the actual quilt.