Today’s finish has been a long time coming and is all the more satisfying because of that.

I started this quilt back in April of 2009 as part of a quilt-a-long hosted by Amanda Jean over at crazy mom quilts. The idea was to sew one nine-patch block per day. By July, I’d completed the 70 nine patches needed for the quilt and then those blocks sat until November 2009 when I finally figured out how I wanted to lay them out.

It then took until May of 2011 before I got around to making a back for the quilt. I used a white thrifted sheet to which I added a row of leftover fabrics from the quilt top. I also added three appliqué hearts to cover some small stains that were on the sheet.

Then it was time to sandwich and hand-baste the quilt.

Once again the quilt got folded and set aside while I tried to figure out how to quilt it.

In the meantime, Dave’s contract with the company he’d been working for in the US since 2003 ended. He did have another job offer at the time but it wasn’t due to start for a few months so we had to return to Canada in order not to violate the terms of his work visa. Everything was packed up and moved into what we thought was going to be temporary storage.

Three years and many adventures later plus a major move just completed and I rediscovered the quilt packed in the same box as the cabinet that houses my Singer 15-91.

The last week and a half has been spent quilting and binding it. I finished hand sewing the last stitch of the binding at 2 am this morning.

I should probably have waited until a sunny day to photograph it but Amanda Jean is hosting her Finish It Up Friday link party today and what more appropriate finish than to share a quilt that got its start on one of her quilt-a-longs.

The quilt finished at approximately 66” X 89”. Dave had to stand on top of something to hold it up.

One of the ladies who pinned a photo of the quilt top  called it a Trellis quilt so I’ve decided that’s what I’m going to name it when I have time to embroidery the label for it.

Those hearts make such a cute addition to the back.

Here’s a close of the simple yet effective straight line quilting. 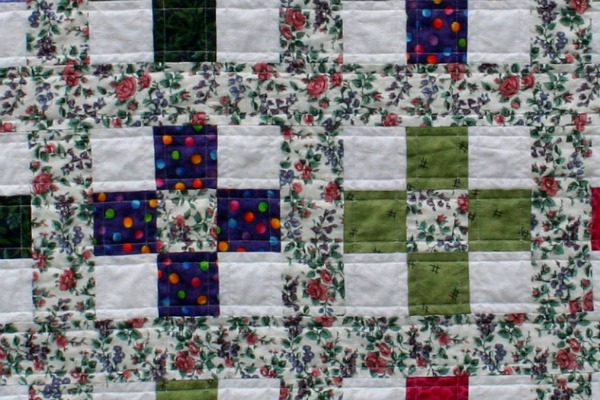 And a close up of the cute rainbow dotted fabric I used for the binding: 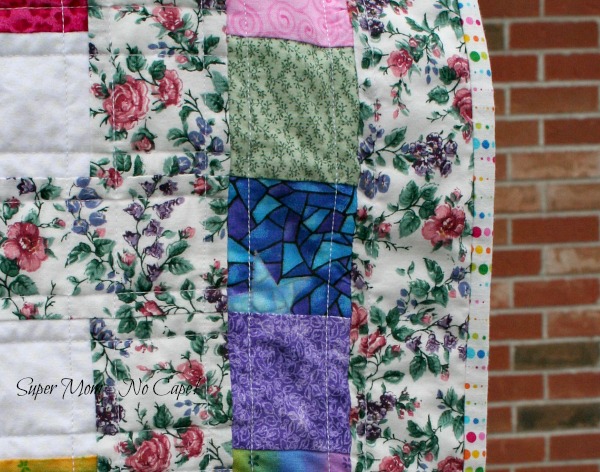 I’m hoping that because all the fabrics were pre-washed that it doesn’t shrink too much after it’s done washing and drying. (Three years in storage and it does need to be freshened up to be ready for company.) The quilt is more than long enough for the full sized bed it will be gracing but there’ll only about a 5 inch overhang on the sides. I’ll post a photo once I have the guest bedroom company ready.

And now it’s back to working on gifts. I can’t believe Christmas is less than 2 weeks away!