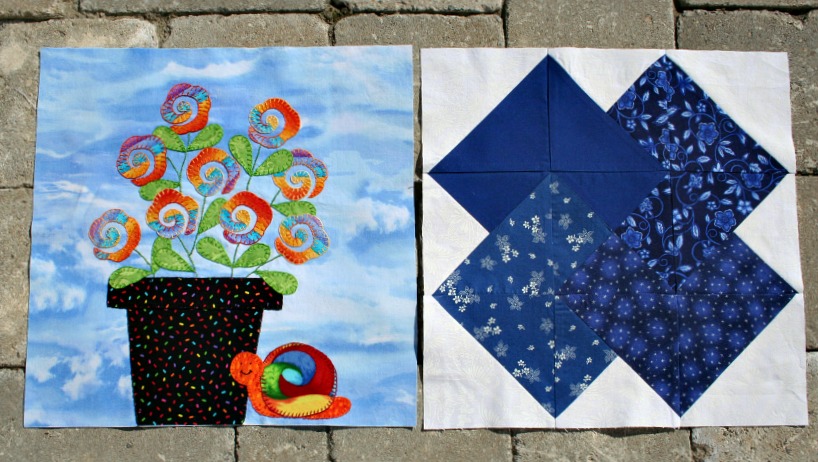 I had soooo much fun making July’s applique block designed by Joan over at MooseStash Quilting!

Block 12, called Funky Flower Pot, features a pretty pot filled with flowers and the most adorable little snail! (I’ll show you Block 11 in a minute as I have some tips to share with you that helped me put it together.) 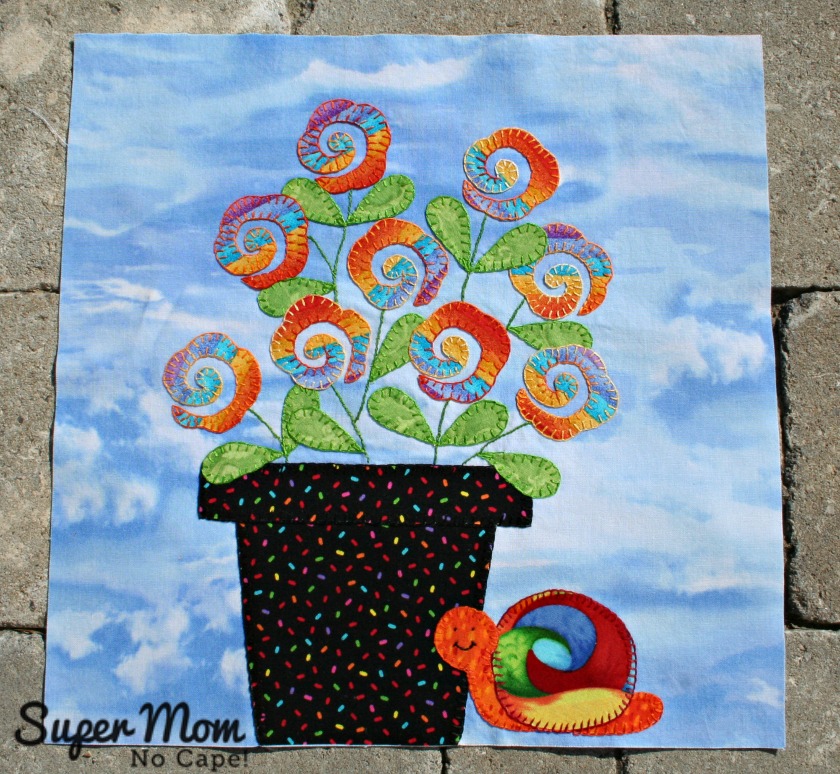 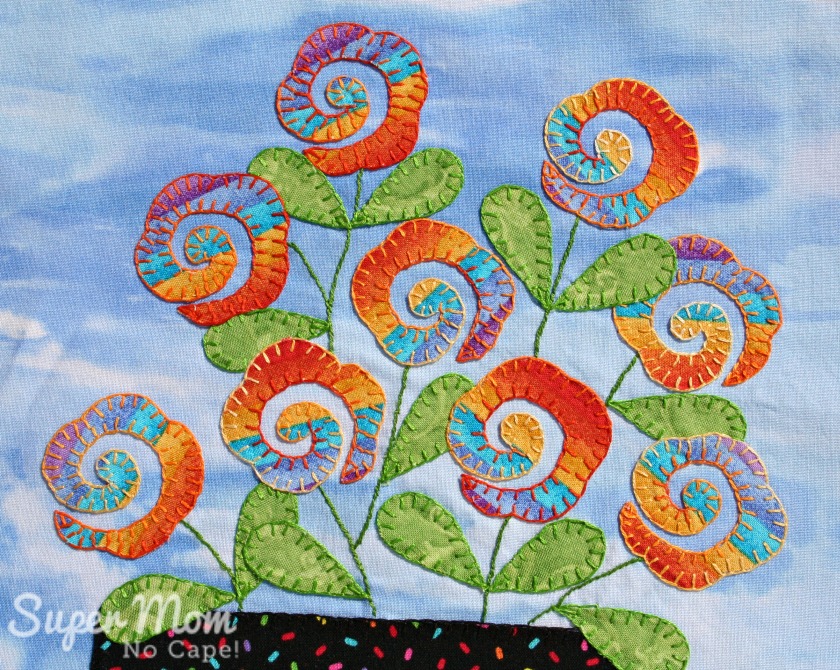 I blanket stitched around each flower with 2 strands of DMC Variegated #51.

I love how they turned out!

And here’s a close-up of that adorable snail. 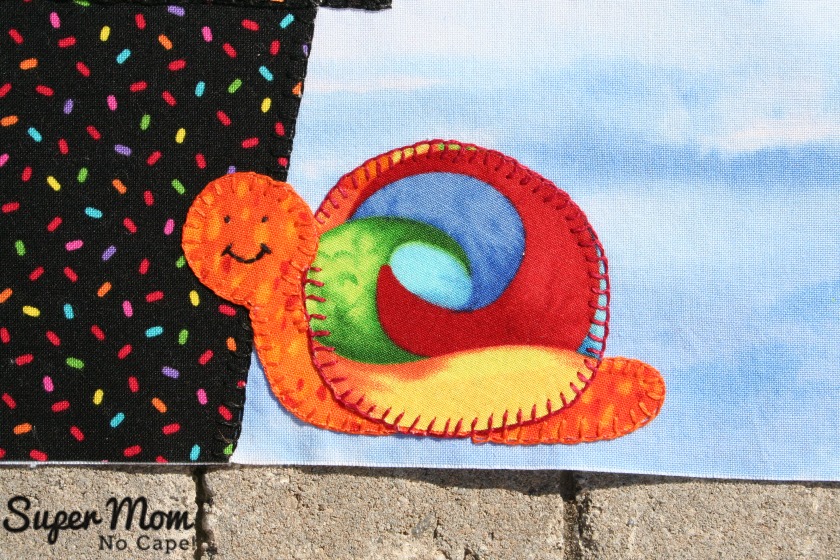 When I was searching through the scrap drawer of my fabric dresser and saw that bright, colorful swirly fabric, I knew it would perfect for Mr. Snail’s shell.

Joan titled Block 11… The “Not” so Tricky Garden. It’s a pieced version of a traditional block called Card Trick. But Joan’s instructions took most of the “trick” out of making the block.

I’m making all the pieced blocks that are shared each month out of blue and white fabrics as a Blue and White quilt has been on my quilt bucket list for a while now. 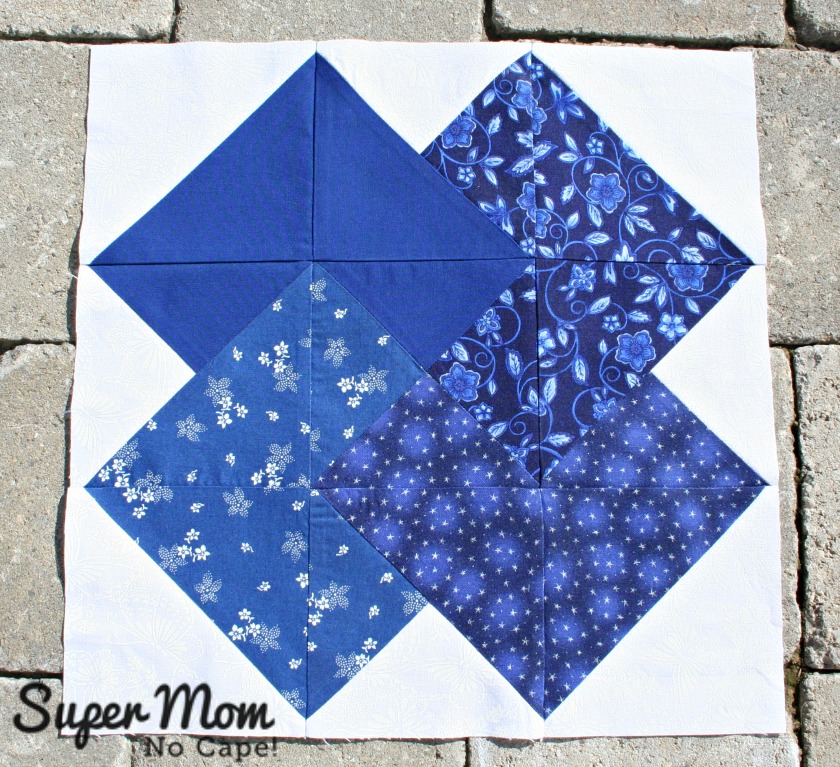 What I like is that Joan has you make the 9 patch blocks slightly bigger than necessary and then trim them down to size. And her advice to use the diagonal lines on your ruler when trimming was spot on.

I just wish I’d read completely through the directions before going off on my merry way thinking I knew how to make the block!

That’s why a couple of my points don’t meet exactly . I trimmed a couple of the blocks before I actually read that section of the instructions. Once I did read them, the other blocks trimmed up perfectly.

For now the block will have to stay this way as I need to conserve that white on white background fabric in order to be able to complete the blocks that will be shared in the coming months. If I can find some more of the white fabric, I’ll probably remake this block before I sew all the blocks together at the end of the In Our Garden BOM.

I did have a couple of additional tips that might help you when making this block.

In order to keep the pieces of the “cards” in the correct order, I made the corner blocks first: 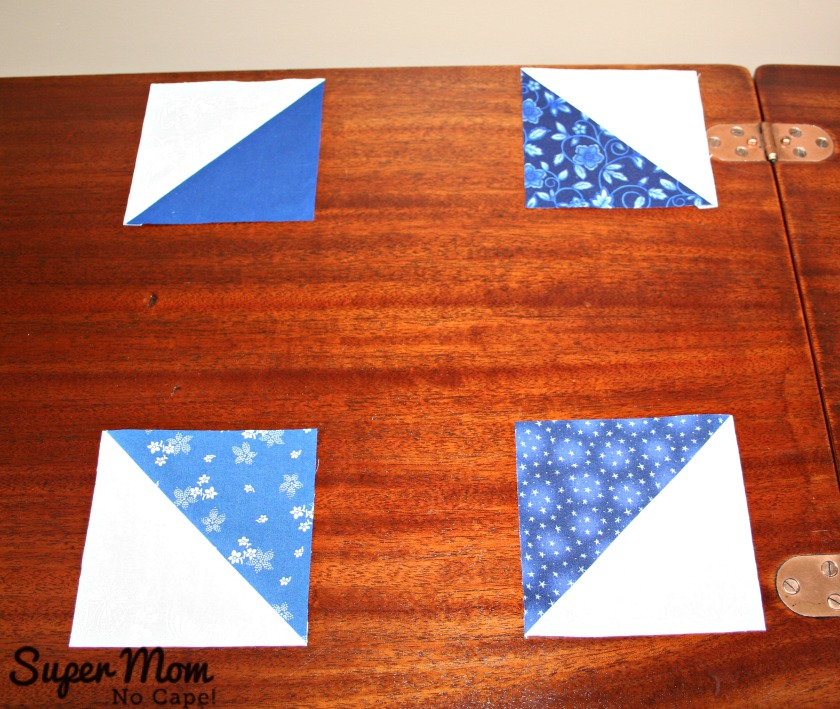 Then I laid the rest of the pieces out in order.

When it came time to sew together the middle blocks of each row and column, I folded the large triangle in half along the long edge and marked the center point. 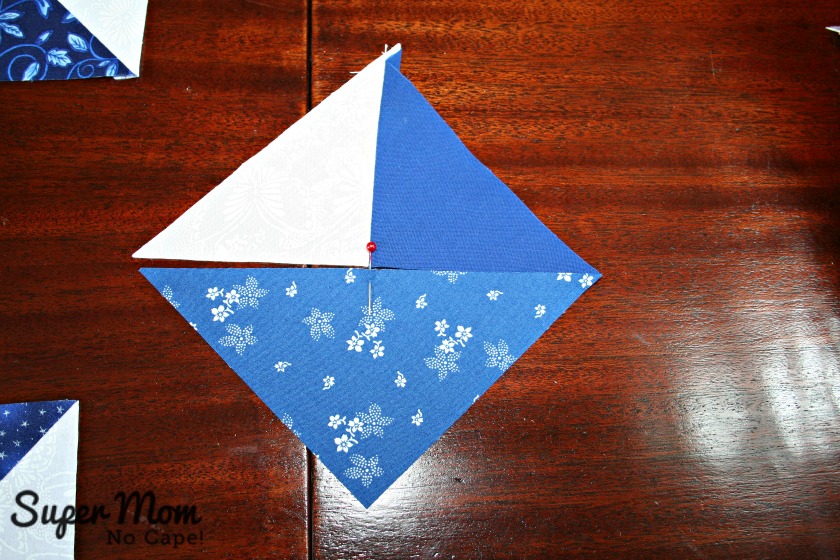 Then I pinned them together, matching the center point of the large triangle to the seam of the joined triangles, like this: The patterns for both of July’s blocks will be free until the end of the month. So hop on over to MooseStash Quilting to download the patterns! 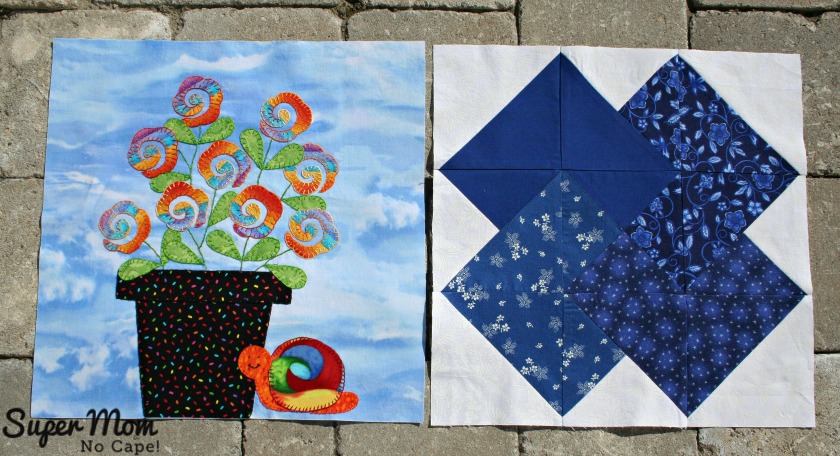 And while you’re there, make sure to enter to win a $25 Gift Certificate from Fat Quarter Shop. 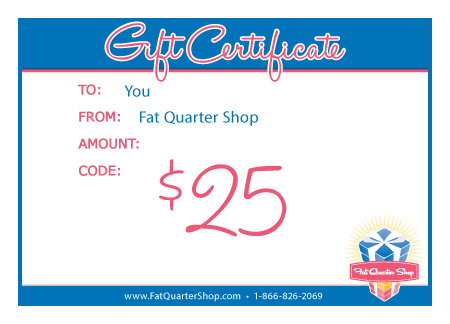 Which reminds me… Congratulations to the winner to June’s $25 Gift Certificate from Fat Quarter Shop. 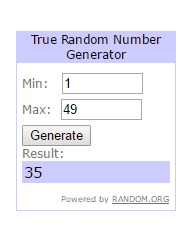 Jackie has been notified and has perhaps already enjoyed using her gift certificate.

Thank you everyone who took time to leave a comment last month on my June 1st post!

Here are my versions of Joan’s July Blocks again in a photo that’s perfect for pinning! 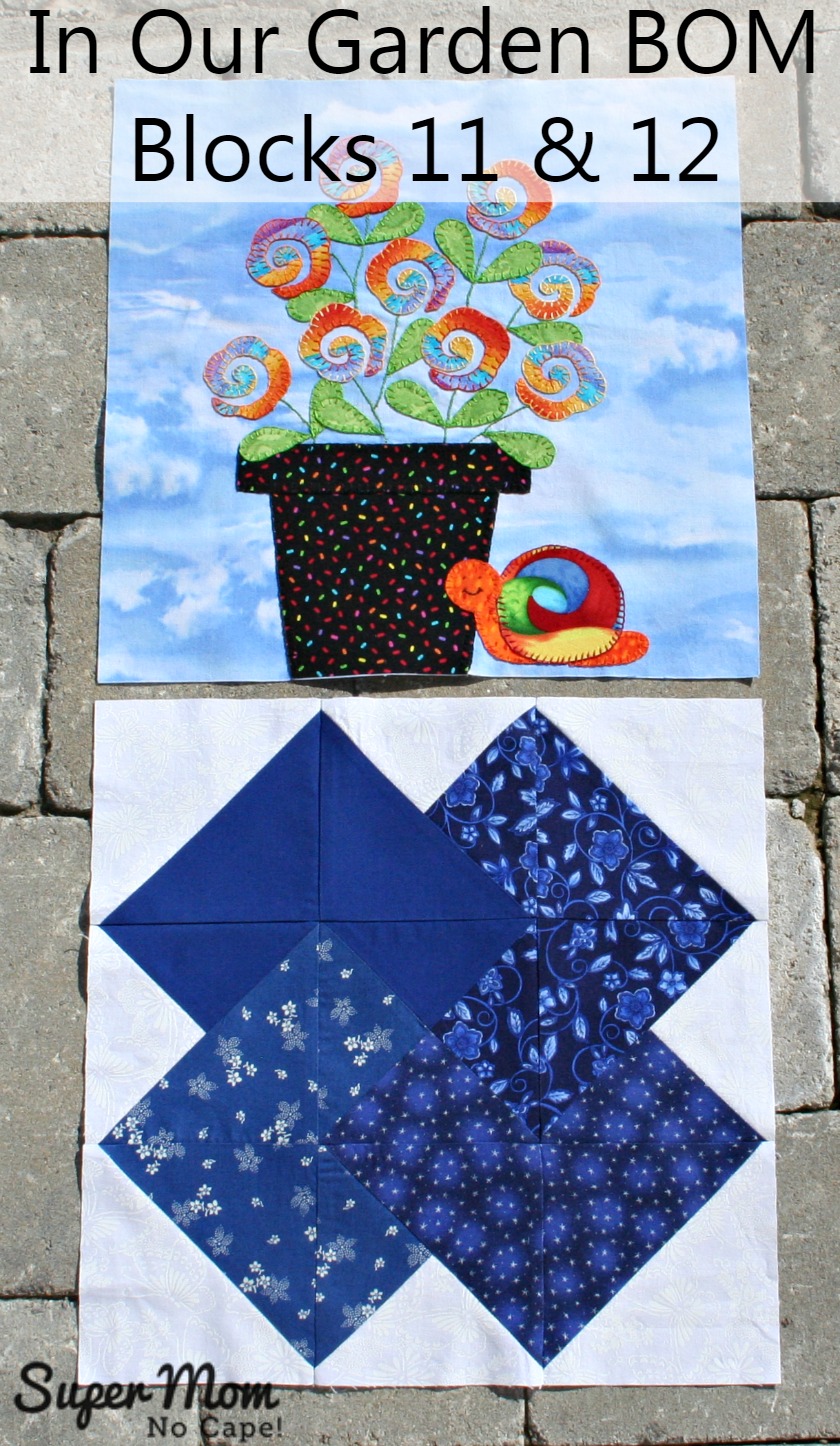