When a huge snow storm moves through bringing with it much colder temperatures and several inches of snow, it calls for good old-fashioned comfort food.

A rummage through the fridge yielded several leftover baked potatoes.

I will often bake extra potatoes with the idea of having some leftover to use later in the week and just as often, in order to make best use of my oven, I also will add several potatoes when I’m baking other meals.

During my search of the fridge, I also found 6 strips of bacon from Sunday morning breakfast, sour cream and a block of cheddar cheese.

With a couple more additions from the fridge and pantry, the result was a yummy Leftover Baked Potato and Bacon Casserole to serve with the meat dish I’d chosen: Pork Medallions Pan-fried with Mushrooms and Onions.

Note: This is what I call a “use what you have recipe.”

As it turned out, the mayo added flavor to the recipe that using only sour cream wouldn’t have.

Same thing with the bacon… the first time I made the dish, I had 8 slices so I used 8 slices. This time I had 6 strips of bacon so that’s what I used.

I usually have a block of cheddar cheese in the fridge. But feel free to substitute a different cheese if that’s what you have.

The recipe can be easily adapted to suit what you have on hand or to your own personal tastes.

Start by grating the cheese. 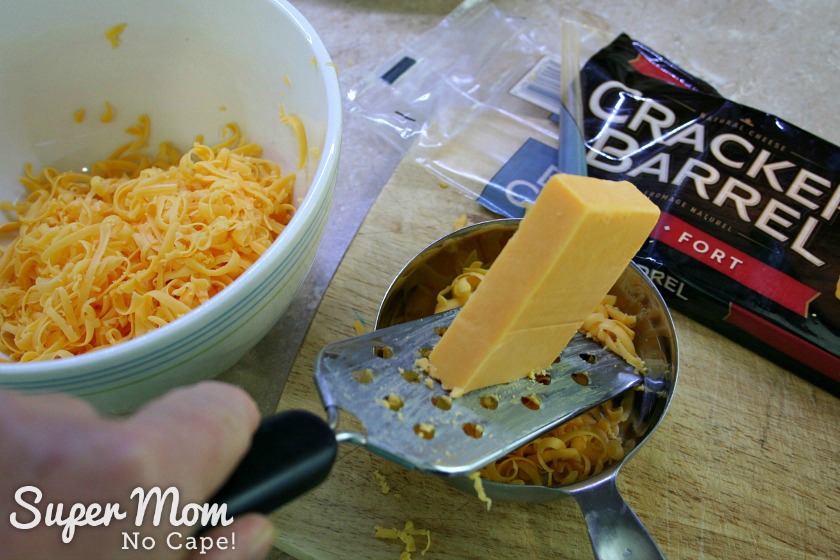 Slice the potatoes into bite sized chunks (leave the skins on) and place them in a large bowl. 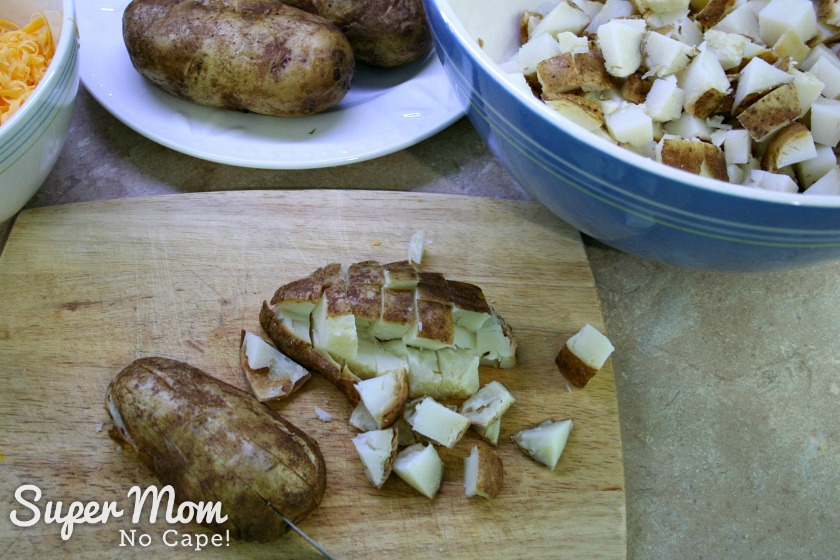 Dice the onion and add.

Chop the bacon. Place half the bacon in the bowl with the potatoes and onions. Reserve the rest of the bacon to garnish the top of the casserole. 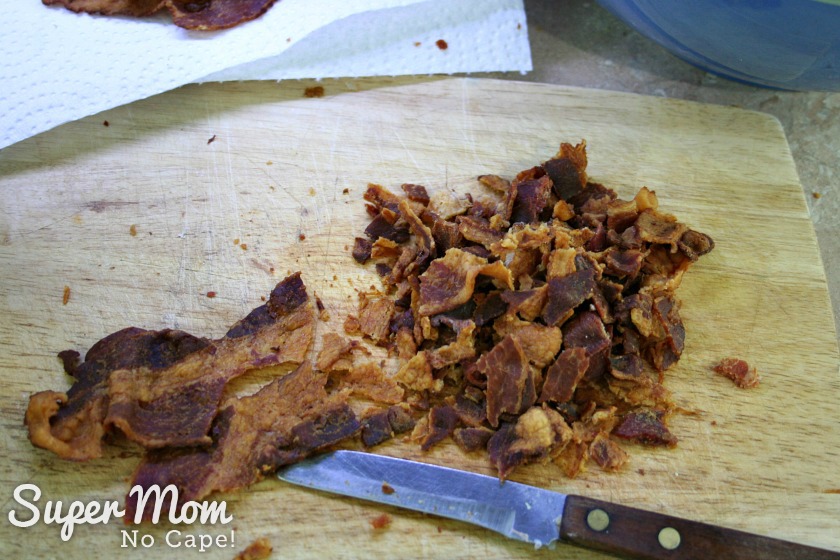 You can also add about 2/3 of the grated cheese at this point. The other 1/3 of the cheese will be sprinkled on top of the casserole.

Measure out 1 cup each of sour cream and mayonnaise… into the bowl they go.

. It makes measuring things like sour cream and mayo so easy.

Set the cup to the measurement you need and fill with the ingredient. 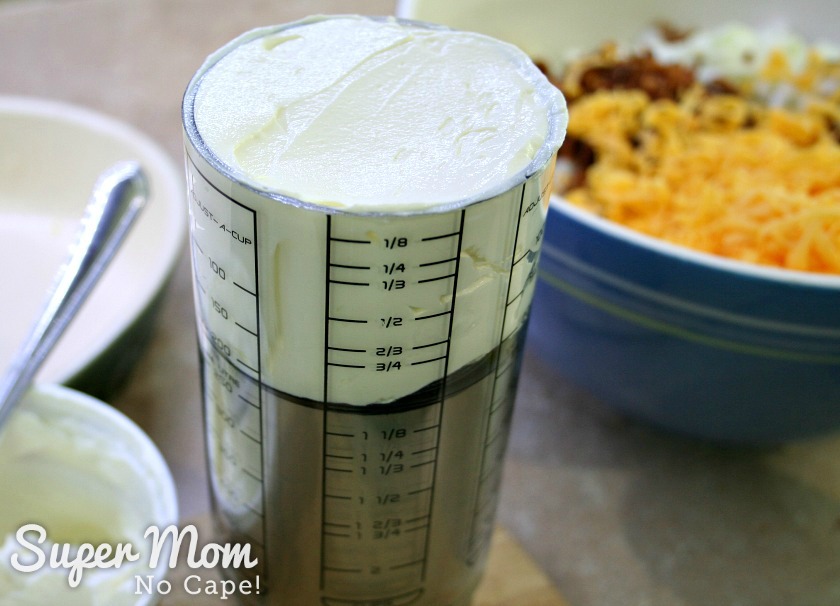 Getting it out of the measuring cup is as simple as holding the cup over the bowl, pushing up the bottom and scraping whatever ingredient you’re measuring into the bowl. 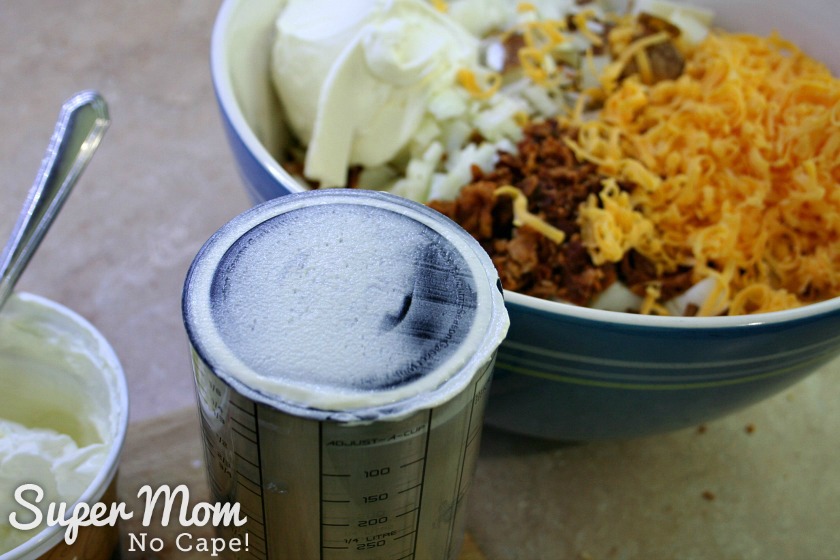 Mix everything together. Add salt and pepper to taste. 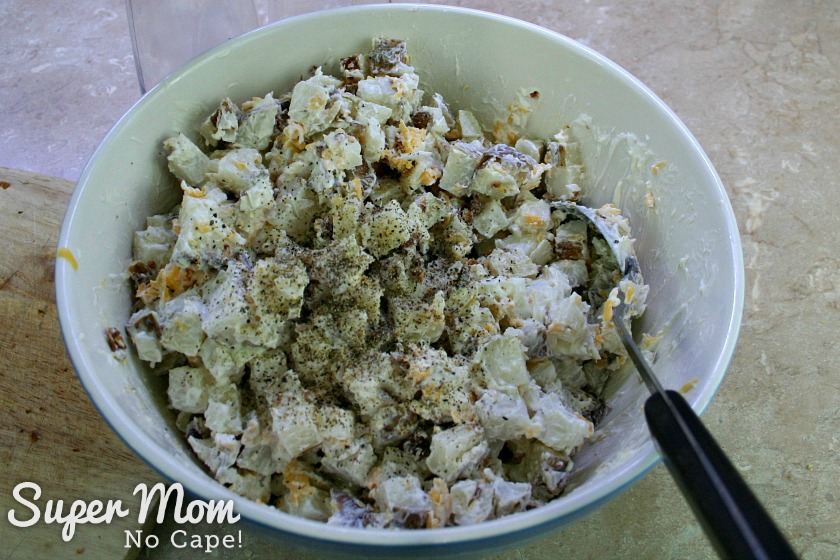 Transfer everything to a lightly buttered casserole dish. (The pretty green and white one pictured is 8”X12”.)

Sprinkle the rest of the grated cheddar cheese on top. Garnish with the reserved bacon crumbles. 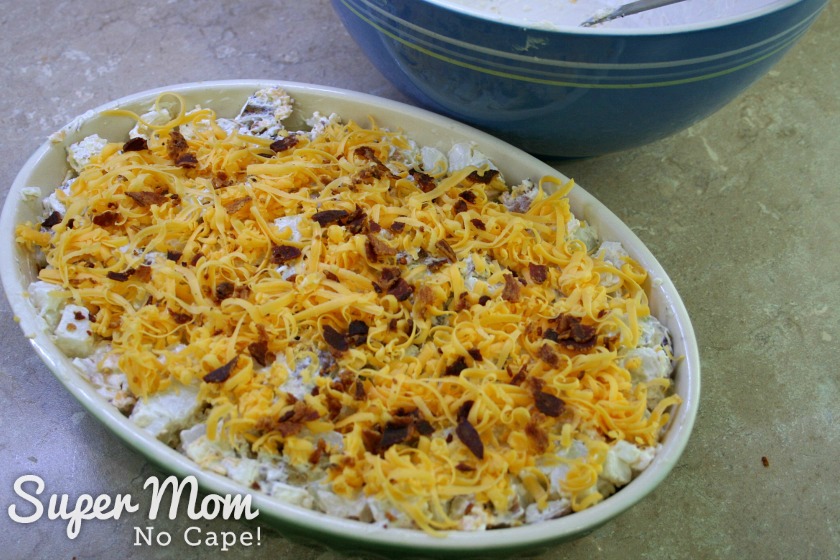 Make sure to use up every last crumb of the bacon! 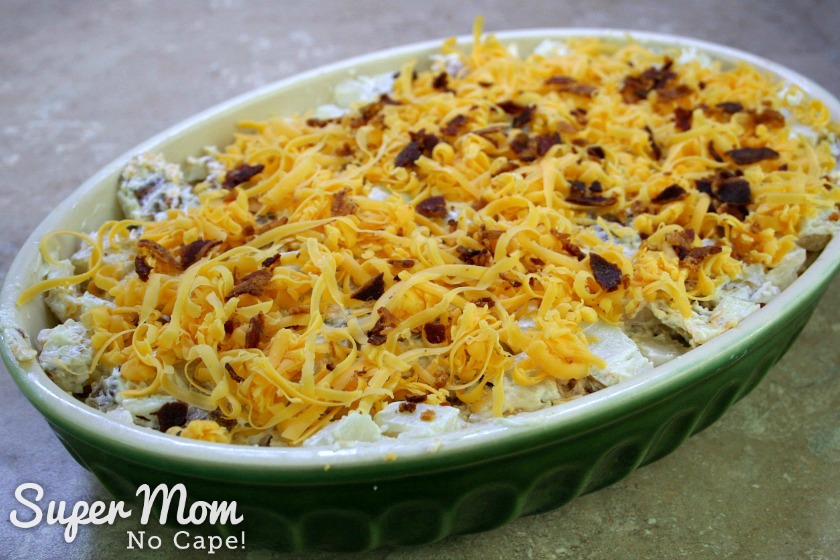 After filling the green casserole dish, I had some of the leftover baked potato mixture left, so I buttered another smaller casserole dish and filled it too. Remove the foil for the last 10 minutes to allow the cheese to brown a bit and the bacon to get nice and crispy.

Serve with whatever meat and veggies you desire.

And it smells yummy too. 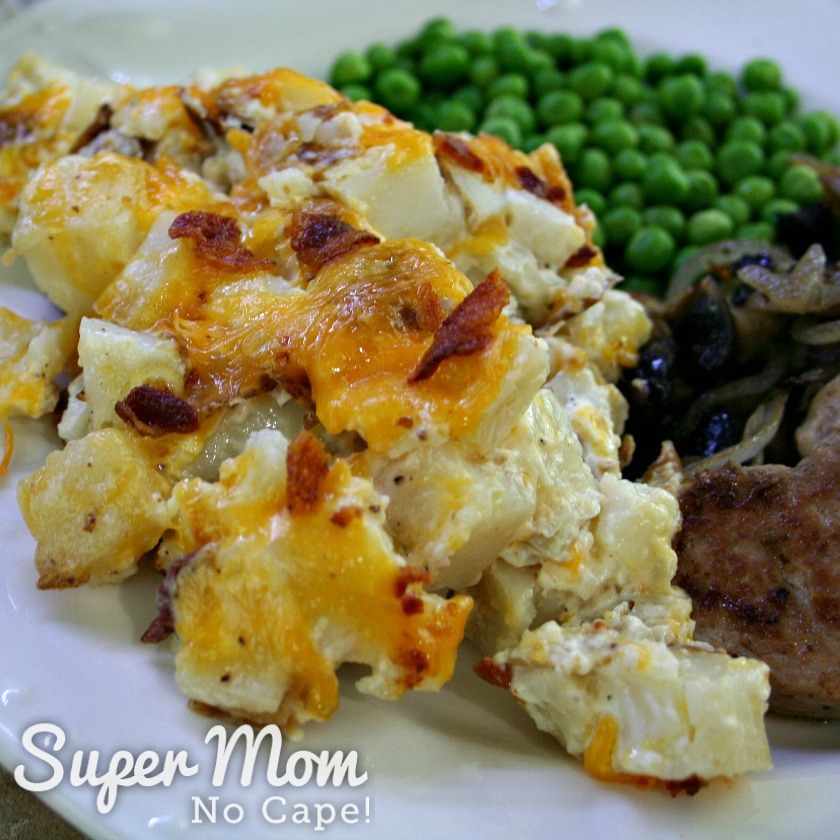 After supper, the smaller casserole had cooled enough to cover it with foil and freeze. We’ll pull it out one night when we need something extra to add to a meal.

Or who knows, it might end up being given to one of the kids for them to use. 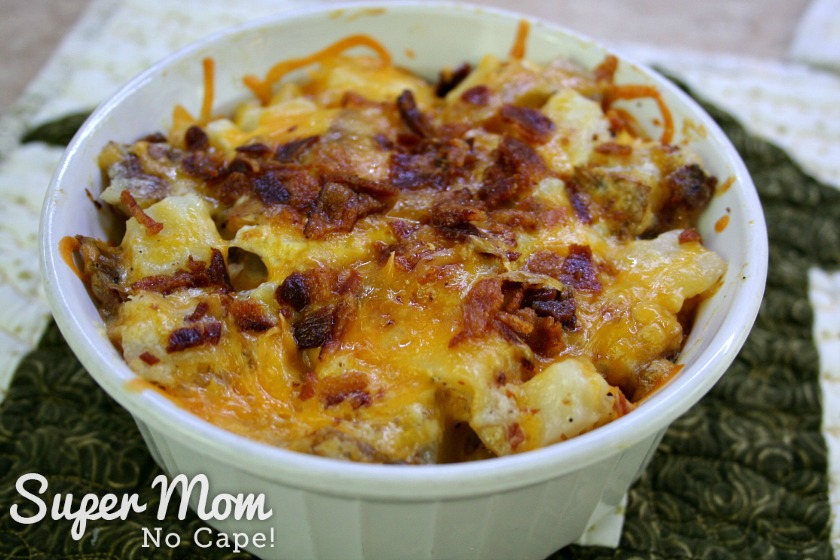 This post originally appeared on Super Mom – No Cape in February 2015. It has been completely updated with new photos and more detailed instructions.