Thanksgiving on a Budget

This week Money Saving Mom and her friends at $5 Dinners and The Homespun Heart got together to create a series on how to host Thanksgiving on a Budget.  Today they’ve opened it up to their readers to post their budget saving Thanksgiving ideas.

So I thought I’d share the simple Thanksgiving menu that I’ve prepared each year for the past 25 years and will be preparing again next week.

Turkey is, of course, the star of the meal.

Because of the great buys on frozen turkey at this time of year,  I buy either two or three depending on how much room I have in my freezer.   One will be used for Thanksgiving, one for Christmas and if I have room for a third, that will be used come Easter.  I buy the biggest I can find and can afford.  The bigger the bird, the more the meat and the more the savings since the carcass weighs about the same no matter what size the bird.

Next is dressing, as we call it.   Though it should more properly be called stuffing since I do stuff the turkey with it.

Mine is a basic recipe with bread crumbs, onions, celery, eggs, butter, olive oil (a change from my mother’s recipe, but I like the flavour it adds), and poultry seasoning.  To keep this budget friendly, I make my own breadcrumbs.

But I guess it’s in the side dishes where I’ve found the greatest difference.  Believe it or not, I’d never heard of green bean or sweet potato casserole until we moved to the States.

When we lived in Canada, I gardened and did a lot of canning, so there would also be small dishes from the bounty of our harvest; beet, dill and carrot pickles and any other kind of pickle I happened to make that year.

Then for dessert, I bake pumpkin pies.  To be honest though, the pie usually doesn’t get cut into until much later in the evening because everyone is too full to entertain the idea of dessert.

There you have it.  And even while writing that out I realized that what I call our simple Thanksgiving menu is lavish beyond compare to that which others will be eating on the 27th.

My point is, try not to get caught up in whether you have this side dish or that side dish or how big the bird is… if it’s lovingly prepared, it is enough.

And for most of us in the US and Canada, it is way more than enough.  And for that abundance, we can be truly thankful. 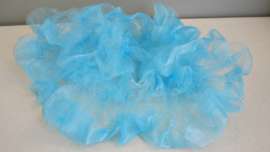 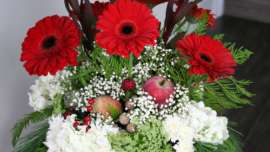 How to Make a Christmas Floral Arrangement 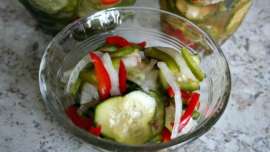