The First Quilt I Ever Made

Over the coming two weeks, to coincide with Spring Quilt Market, Amy over at Amy’s Creative Side is hosting the Bloggers’ Quilt Festival where quilters from around the world can show off their quilts.

I’m going to start out by saying that I would never expect to win any prizes with this quilt; not for construction or quilting or even for style. And to be perfectly honest, that’s the reason I’m sharing it.

Allow me to explain. The quilt pictured below is the first quilt I ever made. 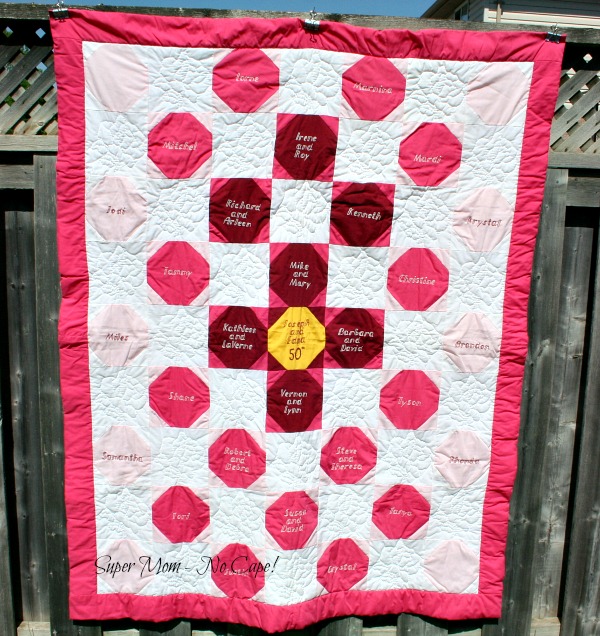 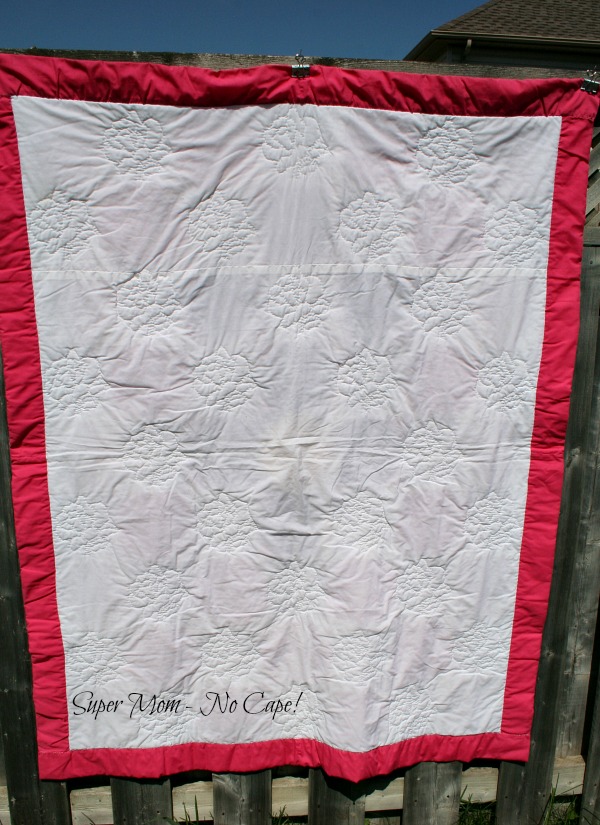 It was made for my maternal grandparents 50th Wedding Anniversary in January of 1987. I started the quilt early in 1986 so that it could be finished and mailed to arrive in time.

You see, we were posted to Lahr, West Germany from 1984 to 1988. Making this quilt was my way of taking part in the celebrations from afar.

I had never made a quilt before. I had no idea how to go about making one and no one to ask. I can’t even remember now how I came up with the idea for it. I may have seen it in a craft magazine or perhaps a book I got from the base library.

The fabric used was solid color broadcloth because that’s all that was available.

I made paper patterns, pinned them to the appropriate fabric and cut out the pieces for each block.

On the center snowball block, I embroidered my Grandparents’ names. (The base store where I bought the fabric didn’t have any gold broadcloth so I used that bright yellow instead.) 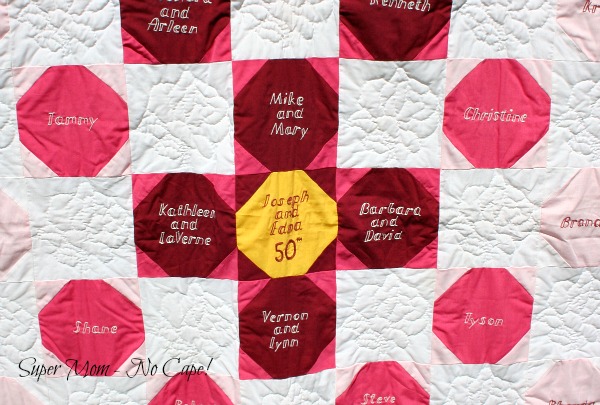 Surrounding Grandma’s and Grandpa’s block were blocks with their children’s and their spouses names. Next came the grandchildren (and spouses) and great-grandchildren.

In a way, the quilt is a memory frozen in time.  Since the making of it, both my grandparents and an uncle have passed away.  There have been births, divorces, marriages and remarriages.

Separating the snowball blocks are plain white squares that I hand quilted with a rose.

The batting was one of those polyester bats that came in a bag.

I had no idea how to bind it. To be truthful, I didn’t even know what binding was. I simply made a wide border that folded over to the back and was hand stitched in place.

By now you may be asking yourself why I’m posting to link up to the Bloggers’ Quilt Festival where there will be hundreds of beautifully executed, hand-crafted quilts to check out.

After my grandmother passed away in 2005, my mother mailed me the quilt. When I spoke with Mom on the phone after I received it, I mentioned how sad I was that they hadn’t used it.

Mom asked wherever I’d gotten that idea. I replied because it looked almost new.

She went on to assure me that the quilt had been on Grandma’s and Grandpa’s bed for many years; it had just been very carefully cared for.

I found myself crying… knowing that they had indeed slept under it.  It had been loved!

I decided to share the quilt and the story behind it so that if there is someone out there who is considering making a quilt for a loved one, it may seem overwhelming after looking through all the quilts that will be on display. You may be tempted to throw up your hands and say, “I could never make anything like that.”

And perhaps at this time, you may not have the skills to complete some of the more intricate quilts. You may not even have what you think are the required tools. But that doesn’t mean that you can’t make a quilt that will be loved and treasured by those you are making it for.

There was a huge gap in time between when I made this quilt and when I took up quilting as a hobby in 2008. Back then, there was no such thing as rotary cutters, rulers and cutting mats. All I had was the basic tools… paper, pins, fabric, scissors, thread, needles, a bottom of the line sewing machine and the desire to make something for two very special people in my life.

If you have that desire too… then take whatever skills and tools you have right now and make a quilt for someone you love. They, like my grandparents, will look past any imperfections and cherish it simply because you made it.