This post has proven to be more challenging to write than I’d anticipated. I mentioned back a while ago that Dave and I were off on a new adventure. It was an adventure that was not entirely of our own choosing.

Last spring when Dave was offered and accepted the long term contract with another US company, we thought that the gypsy lifestyle that we’d led since December of 2011 was coming to an end. As I sat down to write this post, I struggled with just how much to share of our experience of the past few months. In the end, because we don’t completely understand ourselves the events that occurred, I decided that it was best just to say that as sometimes happens with a new employer, the fit was not a good one and things didn’t work out the way we had hoped and leave it at that.

Before I go on to tell you about the rest of our adventure, I do want to say that the people we met during our time in Grand Island, Nebraska were the most amazing people we’ve met in any of our travels throughout the world with the possible exception of Maui. From the moment we arrived until the moment we left, both Dave and I were treated with a kindness and open friendliness that touched our hearts deeply. Everywhere we went, we were welcomed and made to feel at home. I am sure that somewhere in Grand Island there must be grouchy, unkind people but if there are, we certainly did not encounter them in the six months we lived there.

There is one very special family in particular who stood by us and supported us in those last weeks leading up to the end of October and we will hold them in our hearts forever.

When it became apparent that things were not going to work out with the new company, we had a very tough decision to make as to what to do next. We played around with the idea of spending another winter in Florida and seeing what the spring brought in the way of contracts. But after much consideration, we decided that we needed some stability in our life, at least for a period of time.

Our youngest son suggested that we all pool our resources and rent a house together in London, Ontario. So the hunt began. We got lucky and within a few days, we had found a house that fitted our needs and would be available late the afternoon of November 15th.

So at the end of October, we put the furniture we’d bought while in Grand Island into a short term storage unit and headed to Florida. We spent a few days visiting friends there before it was time to drive up to Rome, Georgia to pick up the moving truck and vehicle trailer we’d rented. Then with the help of a good friend, we loaded all our furniture that had been in storage there since we left in 2011, loaded the car on the trailer and made the two day trip back to Grand Island to pick up those things.

Another two and a half days of driving took us from Grand Island across the border into Canada to London arriving early in the afternoon of November 15th. Four and a half days of traveling in one of those big 26 ft Penske moving trucks is one adventure that we don’t intend to repeat!! By that final day of driving we were tired and our backs ached from the less than smooth ride.

That first day, with the help of our son, we were able to off load and get our bedroom set up so that we could sleep in the new house that night. The next day, the rest of the truck was unloaded. And then Monday, Dave and I drove the truck back to Port Huron, MI to drop it off. (Penske doesn’t offer residential truck rentals in Canada so we had to return it to the nearest US location.)

The first week in the new house was spent unpacking and organizing. As we unpacked, we purged. After three years of not seeing things on a daily basis we found ourselves looking at things with fresh eyes. We were able to take many boxes of household items and books to Value Village for donation.

We’ve spent the last week and a half giving the house a deep cleaning, but more on that in another post.

I have such mixed feelings about this latest adventure. I feel sad because things didn’t work out with the new company like we’d hoped. Sad to see one of our dreams slip further away. I feel sad too to have left behind new friendships.

But on the other hand, I’m enjoying living close to two of our three children. Our son will be moving his things in at the end of December as he had to give 60 days notice at his apartment. And our middle daughter is only a two and a half hour drive away in Toronto. She came last weekend when we celebrated Thanksgiving. (We’ve celebrated American Thanksgiving for so many years now that it just feels right.)  And despite everything that’s happened, we do have so very much to be thankful for.

I’m also enjoying having all our stuff in one location and being able to use them again.

I’m looking forward to renewing my acquaintance with my much loved and missed sewing machines.

For the first time in several moves, I have an office/sewing room that is mine alone. Once it’s organized the way I want it, I’ll share some photos… though that might have to wait until after we paint it. Right now the walls are painted a bright peachy orange!!

I’ve been making a list of all the UFOs (unfinished objects) that I’ve rediscovered while unpacking. The one pictured below I intend to have quilted, bound and on the bed in the spare bedroom before Christmas. 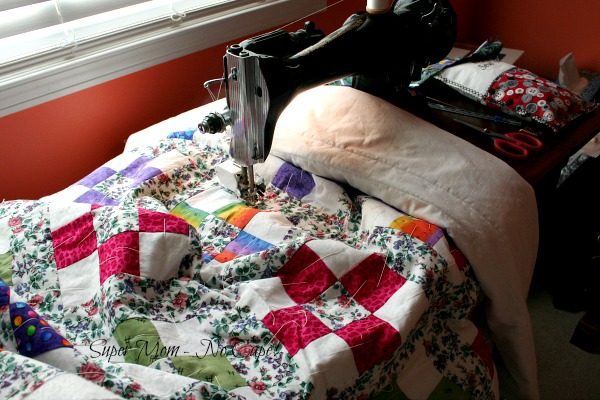 This quilt was started in back in 2009 as part of Amanda Jean of crazy mom quilt’s third quilt-a-long.

You can read about various stages of progress on this quilt here, here, here and here.

My goal is to have all the UFOs finished before we have to move again.

I have no doubt there are more moves in our future… more endings, more beginnings. That gypsy blood that Dave and I both seem to have inherited runs deep. But for now, I’m going to enjoy a period of staying in one place for however long we’re here. 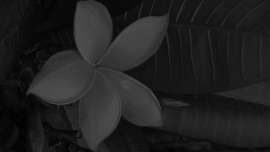 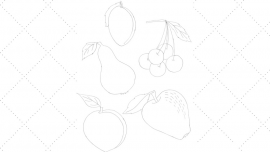 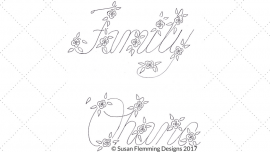